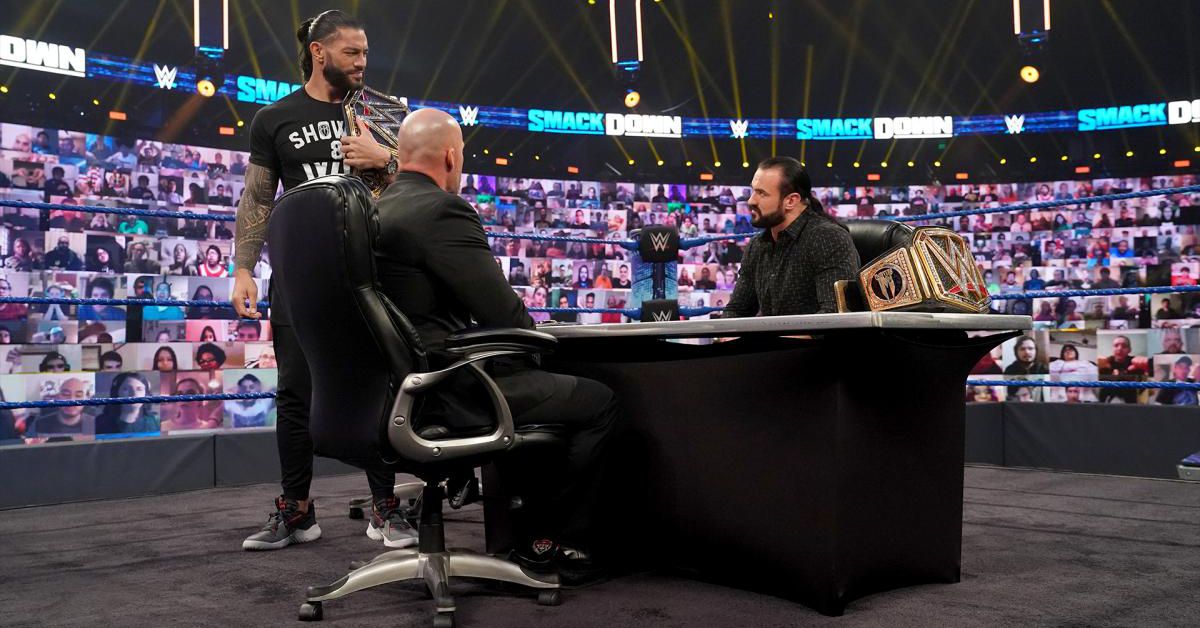 Roman absolutely murders, no, murders … no – slaughter every promo he cuts on TV. And it feels like each one is better than the next.

Roman asked Adam Pearce to step aside so he could sit at the head of the contract signing table. What a nice touch. It’s extreme attention to detail I’m here for.

Drew said he hopes Reigns underestimates him because he now has to prepare for war. Then Roman led the sermon. Roman gave the brutal truth that Drew is only a secondary champion, a stopper, a stand-in. Roman said he is the master, the face of WWE, your tribal chief and the leader of the table. One day, years from now, McIntyre finally gets a chance to be the man, and when he does, he looks back on those nights and thanks him.

He signed the contract and told Drew that he will always be his favorite No. 2. (His favorite shit.)

Shooting Games McReigns? It was a really good wrinkle in the story. I mean, it would have been quite epic if it ended up that Drew was chosen to meet Goldberg at WrestleMania instead of Braun. Calling Drew Secondary was disrespectful, and I loved it.

Isn’t it also interesting that the fight I’m most looking forward to involving Drew, as Lesnar is Roman this Sunday – both Heyman guys?

I think this time it’s Paul Heyman who’s a Roman guy. All of this is brilliant. Roman wins Sunday, but man, I’m still so incredibly excited about this match.

This is getting fast.

The campaign was awful. Asuka quotes the superstars of the past and Sasha makes Michael Cole say “it’s boss time!” Cross. Bad.

Carmella attacked Sasha from behind while trying to get a fight out of Asuka before pay-per-view, and Asuka just … stood there. It made sense! Why would Asuka help her after all that Sasha and Bayley did to her and her best friend Kairi Sane over the summer?

Right on Asuka’s side here as much as I love Sasha. Sasha needs the win on Sunday, but I have a feeling the win goes to Asuka.

Daniel Bryan defeated Jey Uso – I really, really appreciated the aggression of both men. Before the fight, Bryan said his daughter cried when he was in the hospital and he understands that there is an angel and a devil on Uso’s shoulder. The fight reigned where Bryan tried to stomp Jey’s head into the mat and Jey almost got the win. Bryan got his knees up and blocked Jey’s splash and won with a small package. Really well done from these two. No Roman presence and I wonder how this loss will play out for Jey.

Not to put a damper on things, but Jey is in the men’s Bragging Rights team on Sunday. And he lost. There was a trend on this show.

Murphy defeated Seth Rollins – Very well done match between these two too and I liked how they showed us that they knew each other and could anticipate what the other would do. We saw that both when Murphy went to superkick Seth on the turntable and Seth kicked him first, and when Seth went to the curb and Murphy moved out of the way, delivering sick-sounding knees to Seth’s face. The Mysterio clan was out for this fight, and Seth took his aggression out on the men, which made me worry a little that it would continue what is supposed to be done with them. I think it’s going to be okay.

Team mark team champions def. Corbin, Zayn, Ziggler and Roode – SmackDown before Survivor Series – one night a year Raw and SmackDown’s roof team champions face a group of SmackDown wrestlers and tease disagreement! We did not need it. There was a bunch of stupidity here. The Raw tag team champions were giving a title fight to a SmackDown tag team. Very … creative and … sensual. (Sarcasm!) But when the tables were turned on on New Day, Street Profits came to the rescue. Hm, where was Big E supposed to save his boys? He was right in the same room with the two men who came down to rescue them!

That’s because we wouldn’t have had a meaningless 8-man team match if E showed up. Sami was caught by a flying Montez after just being in the fight for 12 seconds. Please tell me why this happened when Roode or Ziggler, who are neither with Bragging Rights, could have eaten the needle? Sami is in a Bragging Rights fight on Sunday. Corbin is also on the men’s SmackDown team and was a loser here. Losers make up most of the SmackDown side of this upcoming show. Which boasts rights, of course.

Natalya def. Tamina – The captain and the BOAT are on Team SmackDown. Bayley decided to take the captaincy role when Adam Pearce chose her to be on the team while pushing Natalya and Tamina in a fight to qualify. Unfair! Bad Tamina did not have a chance here because Natalya’s victory was heavily telegraphed. So we have Bayley, Bianca, Liv, Ruby and Natalya vs. Nia, Shayna, Lacey, Peyton and Lana to brag about rights. I want to see the SmackDown women take it, but whether they win or lose, Lana will be the only survivor of Raw. I will bet my house on it.

Otis is on the men’s team – So Otis, who has done virtually nothing too late since losing the Money in the Bank briefcase, was chosen to be on the men’s Bragging Rights team this Sunday by Adam Pearce. His new … manager? … Chad Gable tried to take credit for that. Do not take credit for stupid ideas, Chad. Uh … okay! Of course. I mean, Big E hung around. I do not know where after the first three minutes of the show, but I would rather have chosen him.

Well, we have our pay-per-view this Sunday, and there are a few things that are obvious – the Survivor Series stinks now, and WWE can not book shit to make it exciting. However, it is not exclusively for the Survivor Series. WWE tends not to book well. Just par for the course watching WWE in the last few years. While it’s not exclusively for this show, that’s why this show now stinks. BRAND OVERHEAD and all. The right to taunt. Not very convincing.

We have Undertaker goodbye, but it’s like that really a goodbye? Time will tell. I’m just looking forward to Roman and Drew.

What are your predictions for Bragging Rights, Cagesiders?