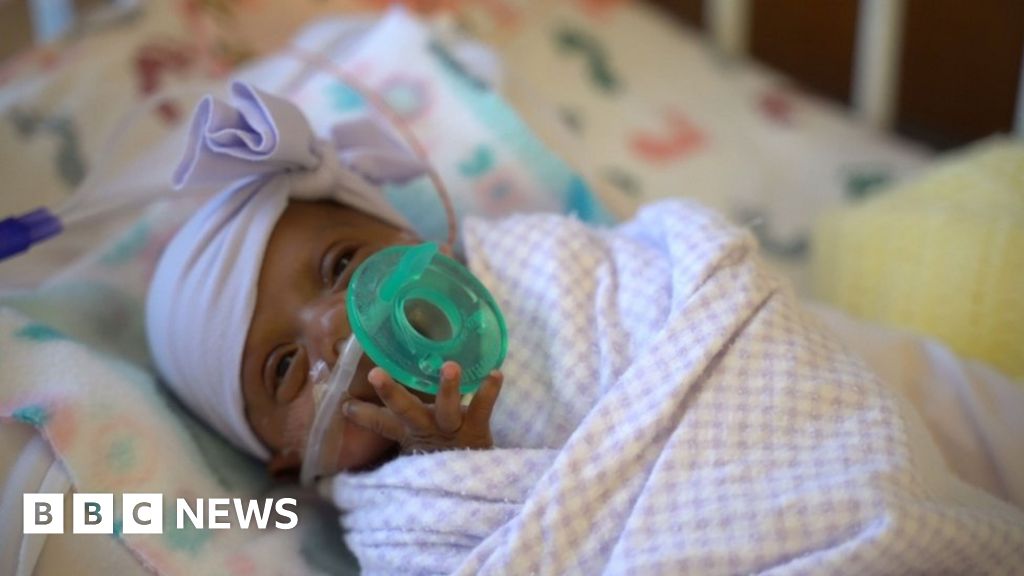 A baby born weighing just 245g (8.6oz), believed to be the first on record to survive premature birth, has been discharged from hospital in the US.

Baby Saybie weighed the same as a large apple when she was Born at 23 weeks and three days in December, 201

Doctors told Saybie's parents she had just hours to live .

But five months on, she was discharged weighing a healthy 5.6 pounds (2.5kg), confounding all expectations.

A nurse who cared for Saybie as she battled for survival said her recovery and release earlier this month was a "miracle".

Saybie was discharged five months after being in intensive care

The previous record was held by a baby girl from Germany, born weighing 252g (8.9oz) in 2015, according to the registry, operated by the University of Iowa.

A baby, born weighing just 268g (9.45oz) ) in Japan earlier this year, thought to be the smallest boy to have survived premature birth.

Saybie's mother gave birth to the little girl at emergency C-section three months ahead of schedule after she was diagnosed with pre-eclampsia – a pregnancy complication involving high blood pressure which can prove fatal for mother and baby.

In a video released by the hospital, the mother described as the "scariest day of my life".

"I kept counting them "She's not going to survive. She's – I'm only 23 weeks [pregnant]", "the mother, who has chosen to remain anonymous, said.

Her birth was so premature, doctors considered her "micro preemie" – a baby born before 28 weeks' gestation. Babies are usually born at 42 weeks, the hospital said.

She was so small she could "fit the palm of the hands of her care team", it said.

Her survival, doctors believe, could be attributed the fact that she suffered no serious complications after birth.

"Saybie experienced virtually none of the medical challenges typically associated with micro-preemies, which can include brain bleeds, and lung and heart issues," the hospital said.
Source link