With Flyovers and Flags, Trump Plays M.C. for the Fourth 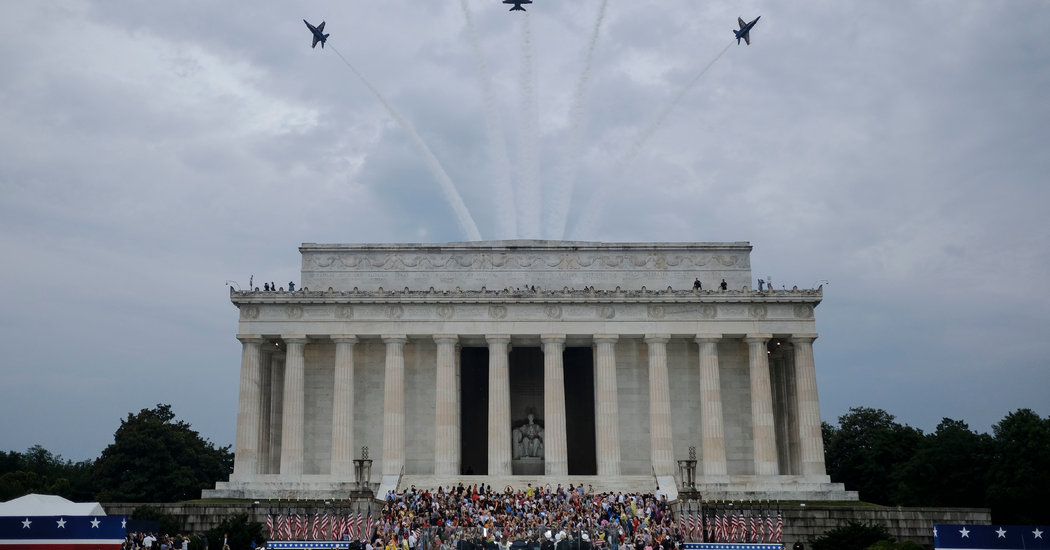 The president's supporters flocked to the event despite the oppressive heat and at-times heavy rain, delivering for Mr. Trump the child of tableau he wanted for the cameras, filling almost all of the open spaces around the Reflecting Pool and the Lincoln Memorial.

Trump made mention of congressional democrats or Robert S. Mueller III, the special counsel in the Russian investigation, or any of his presidential rivals – his usual targets at his rallies. In that way, the White House made good on its promise, having said Mr. Trump would avoid giving an overtly political speech.

Instead, the president – who never served in the armed forces and was deferred in the draft during the Vietnam War because of bone spurs in his heels – took a sometimes rambling trip through America's military history, recounting with the Army, Navy, Air Force, Marines and Coast Guard.

Many military families who received invitations to a VIP section close to the president's internship appeared to all but ignore the usual understanding that members of the armed forces should not engage in partisan political activity. Many were Trump's MAGA hats and openly campaigned for Trump's re-election, chanting, "Four more years."

Before Mr. Trump's arrival, supporters of the president huddled in the V.I.P. section of the band has a medley of patriotic songs, including "God Bless America." Letter cheers of "U.S.A. U.S.A.! U.S.A.! ”Came from the military crowd pressed along the fence line.

Daniel P. Cortez, 68, or Stafford, Va. section waiting for the president. Mr. Cortez, who works at a group that helps veterans deal with judicial issues, said he received an invitation from the White House on Monday.

Republicans are struggling to raise the minimum wage