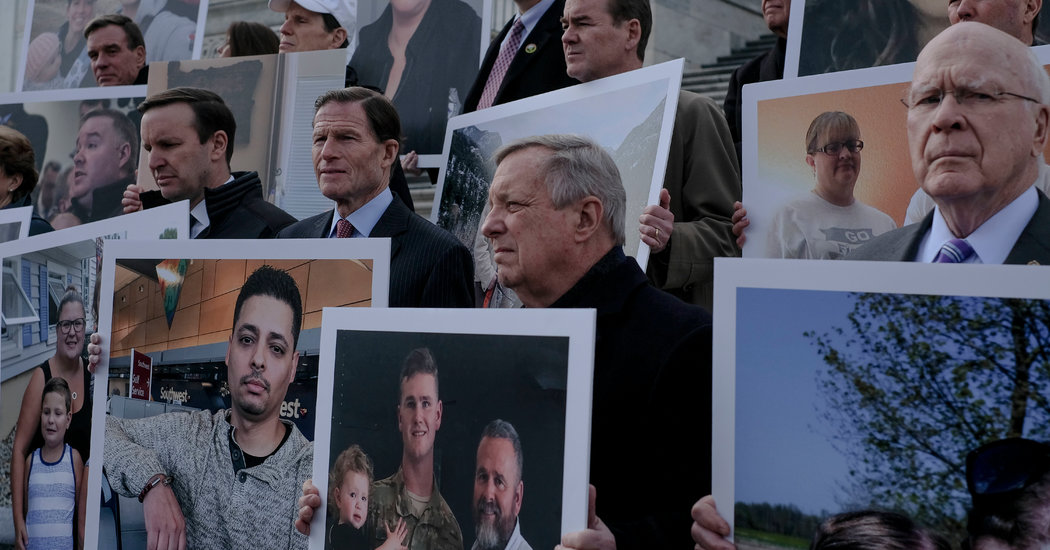 WASHINGTON – As the government shutdown stretches into its fourth week, the Trump administration is reinterpreting longstanding rules to open the federal government piece by, forcing thousands of workers to report to work without pay, many of them in sectors that could minimize damage to the president's base.

Federal farm service offices will open to help farmers and ranchers. With tax season underway, the Internal Revenue Service is calling more than half of its 80,000 employees back to work. Thousands of furloughed safety inspectors have been told to report to airports and runways. And dozens of Interior Department employees will lease to the country's coastline to sell oil and gas.

"It's time for the Democrats to negotiate," Russell T. Vought, the acting director of the White House's Office of Management and Budget who Helps lead the effort to recall IRS employees, recently said. "In the meantime, we will make this shutdown as painless as possible, consistent with the law." That last phrase – consistent with the law – has proved crucial for a team of 12 lawyers working under Mr. Vought. In the case of shutdowns, only workers deemed essential to protecting life and property – a category that would include people like Secret Service agents – were allowed to work.

administrations, that would broaden who is considered essential, using lesser known exceptions to call back thousands of employees to perform duties like preparing taxes or opening mail.

A senior administration official, who spoke on the condition of anonymity, said lawyers were relying on on guidance issued during past shutdowns, including a Clinton-era contingency plan that allows exceptions for workers whose duties do not rely on yearly appropriations.

After using this rationale to bring back tax workers, lawyers at the budget office are now reviewing requests to reopen parts of the government agency by agency, according to Trump administration officials. That would essentially reverse how previous administrations interpreted the rules as minimizing the effect of a protracted shutdown that the president has no plans to end the officials said.

Critics said the Trump administration was building a specific legal case that interprets an exception to the law in the broadest possible terms. Its actions have already drawn at least five lawsuits from labor group representing thousands of federal employees, including the I.R.S. and the National Air Traffic Controllers Association

Gregory O'Duden, the General Counsel of the National Treasury Employees Union, which has the administration on behalf of 70,000 of the IRS's work force of 80,000, accused administration officials of manipulating Laws to keep Americans happy and score political points.

"A law that was intended to be a narrow exception to being a wide open path for them to run through," Mr. O’Duden said. The White House, he said, “has been conceived as an untenable rationale that will require tens of thousands of employees to come back and not be paid.”

Former administration officials who have examined the same sets of rules in previous shutdowns – and landed on different interpretations – are puzzled by the White House's actions.

John A. Koskinen, who retired as IRS commissioner in 2017, questioned whether the efforts violated the Antideficiency Act, which prohibits the government from spending money for any reason that Congress has not appropriated. He suggested that the Office of Management and Budget was using a loose interpretation of government regulations that say unfunded government operations could only continue during a shutdown if needed to protect life and property.

eliminate as much of the backlash against the shutdown as they can, ”said Mr. Koskinen, who was the point person at the budget office during the 1995 shutdown. “There's nothing wrong with that, theoretically, as long as you're doing it according to what is legal.”

Mr. It is possible that the administration would argue that tax refunds were "continuing appropriation," but that it would be hard to make the case that taxpayers face real hardship if their refunds are delayed, as they are with Social Security payments. 19659002] That is the comparison Trump administration officials say they are trying to make in enforcing their own contingency plan.

In some cases, the administration has that essential duties can now include opening mail: On Wednesday, the Agriculture Department said that it would work for Farm Service Agency offices for three days to provide "limited services" to farmers and ranchers who needed assistance processing farm loans. The 2,500 workers will also help open mail to identify important items. (They will not have to work on Martin Luther King's Birthday, according to the agency.)

The I.R.S. remains the most prominent example, as the Treasury Department updated its shutdown contingency plans this week and recalled more than 40,000 employees to process refunds at the tax collection agency. The I.R.S., which is already understaffed, is three months away from Tax Day, when millions of American will be grappling with how to file under the new tax law.

This maneuver directly reverses actions taken during previous administrations. A letter sent to the Treasury Department to lawmakers on Capitol Hill and reviewed by The New York Times pointed out that the Obama administration had been taxed at budget office lawyers that could not be taken.

“Although in 2011 the Office of Management and Budget directed at the IRS not to pay funds during a lapse, "the letter read," O.M.B. has reviewed the relevant law at Treasury's request and concluded that the I.R.S. may pay tax refunds during a lapse. ”

The Trump administration has also faced criticism for recalling clerks to the I.R.S. to process tax transcripts that home buyers need to verify their income. The decision came after an intense lobbying campaign by the mortgage lending industry.

Former government officials said the actions were politically motivated, as the administration tries to prevent Americans who rely on the federal government from feeling the shutdown's pain. This is going to be the political pressure and the hardships are really starting to mount and rather than sticking to the rules. Budget Committee

And efforts to mitigate the effect of the shutdown could actually be achieved by reducing the political costs of inaction.

Alice Rivlin, who served as the budget director under President Bill Clinton, noted that President Trump was taking the opposite thanks to the one that had administration during the shutdown of 1995 and 1996 that was incited by a fight over which economic forecasts would be used for budgeting.

"We wanted people to notice that they were getting government services to put pressure on Congress to get something done," Ms. Rivlin said. "This seems to be a different approach – letting it be as easy as possible so there won't be much protest."

A federal judge on Tuesday denied and request to issue and injunction or temporary restraining order to stop the Trump administration from calling back workers whose jobs are not related to the health and safety of Americans, but said that he would hear arguments at the end of the month.

Shortly after, in a list of talking points the White House circulated to supporters, officials wrote that the administration was "expanding the use of funds not appropriated through annual appropriations" to provide services to farmers, and forwarded the IRS recall as a success compared with the Obama administration.

"Unlike the 2013 shutdown," according to the email, which was reviewed by The Times, "the Trump administration will still process tax refunds."

In that email, the White House made no mention of the people who will be doing the work.