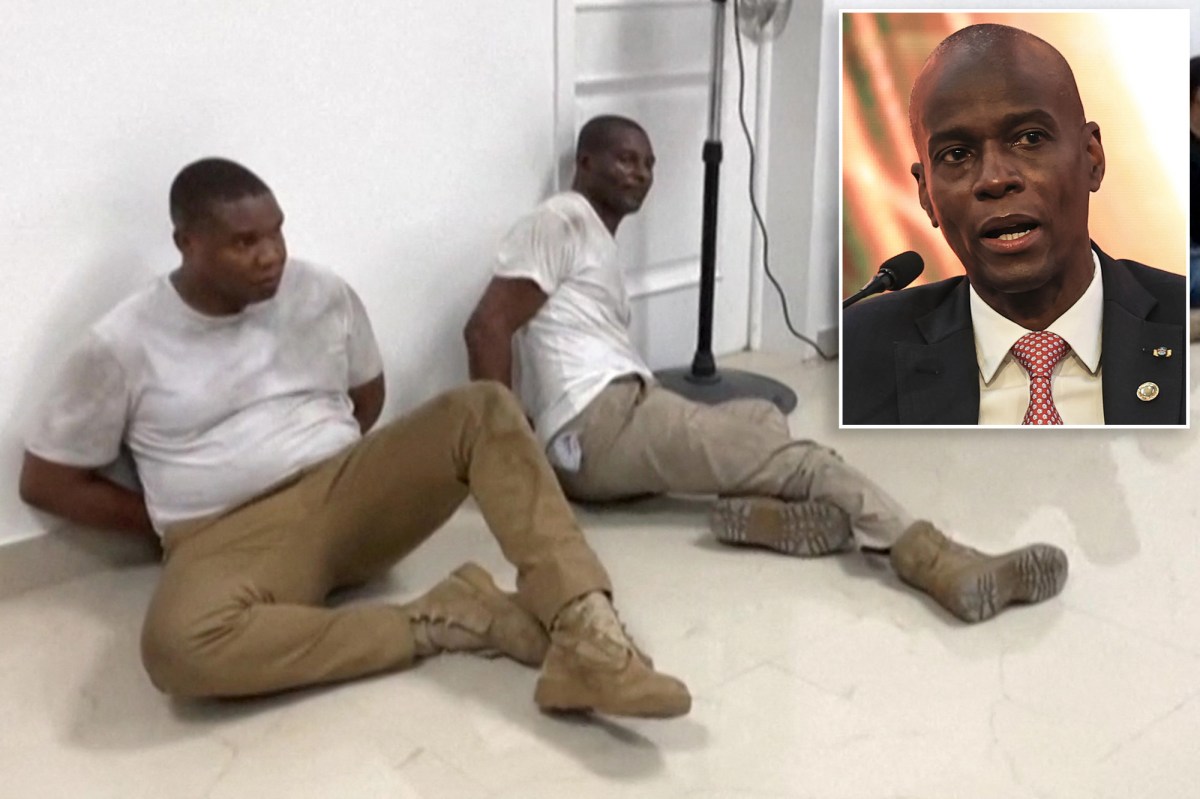 Two Haitian Americans with ties to South Florida – including one who previously worked as a bodyguard at the Canadian embassy in Haiti – are among the 28 alleged assassins of President Jovenel Moïse, officials said Thursday.

James Solages, 35, and Vincent Joseph, 55, allegedly took part in the cheeky attack on the Haitian leader, who was reportedly shot a dozen times at his home in Port-au-Prince on Wednesday, officials said. His wife, Martine, was critically injured.

The two men were paraded along with 15 other suspects, all citizens of Colombia, in front of journalists during a press conference late Thursday. In all, the hit group consisted of 28 armed men, including 26 Colombians, officials said.

Despite the Haitian authorities’ display of the American suspects sitting near two tables filled with firearms, machetes, bulletproof vests and cell phones, their alleged involvement in the deadly plot was shrouded in mystery.

It was unclear why the Haitian government believes they were involved, how long they had been in the country, how and when they arrived there, or even what their motive was, the Miami Herald reported.

U.S. officials said they are aware of the allegations against U.S. citizens, but according to the newspaper, they could not comment on the allegations because of privacy.

It was confirmed late Thursday that Solages had once worked for a company that had a contract to provide security for the Canadian embassy in Port-au-Prince, the Herald reported.

“We are aware of allegations involving a person who was briefly hired as a reserve guard by a security firm hired by Global Affairs Canada in 2010,” a government official told the paper on condition of anonymity due to the unstable situation in Haiti.

Solages, who lived in Tamarac, a Florida town in the Fort Lauderdale area, has no criminal record, according to the Herald, which cited divorce cases in the United States, but no other legal issues.

His aunt, Victorie Dorisme, told the newspaper she learned of the allegations against him from Haitian TV – and is confused about how the maintenance worker in South Florida became a suspected international assassin.

“I have never heard of him in such trouble,” Dorisme told the Herald, adding that Solages had sent his mail to his address while moving home due to his divorce.

She said he divided his time between his job as a building maintenance worker and running a small charity.

Solages described himself on his charity website as a “certified diplomatic agent” and former bodyguard for the Canadian Embassy in Haiti – but the site appears to have stopped working, the paper reported, adding that calls and emails to the charity were not returned.

In a statement, Canada’s State Department did not refer to Solages by name, but said one of the men detained in the assassination had been “briefly employed as a reserve guard” at his embassy by a private contractor.

Solages’ Facebook page, which has now been taken down, said he attended Fort Lauderdale High School, according to the news release.

Between 2015 and 2018, he continued to study at Atlantic Technical College in Coconut Creek and later Florida Career College, where he said he had an associate professor of information technology, the Herald said, referring to his page on social media.

Solages – who said he was originally from the port city of Jacmel on the south coast of Haiti – had a Florida-registered company called FWA SA A JACMEL AVAN INC, which he described on LinkedIn as a charity with financial authority according to the paper.

He also has a business – EJS Maintenance & Repair LLC – with two other Haitian men who are also affiliated with the charity, the Herald said, referring to Florida records. His LinkedIn page also describes him as the CEO of the remodeling company.

“An experienced civil engineer specializes in infrastructure, equipment, HAVC, painting with a demonstrated history of working in the hospital and healthcare industry,” he wrote on his LinkedIn page.

He listed Spanish, English, French and Haitian Creole as languages ​​he speaks. His Facebook page recently showed him wearing a suit and he posted some pictures of armored vehicles, the paper reported.

The LinkedIn page now shows him as a factory operations manager in Lantana, about 40 miles north of Fort Lauderdale, for a company called Senior Lifestyle, which runs senior communities nationwide.

In Lantana, it operates Carlisle Palm Beach, which describes itself as “an exclusive resort-style senior-residence option.” Workers who refused to tell the Herald whether Solages is employed there.

Meanwhile, almost nothing is known about Joseph that the Haitian authorities said he lived in or at one time lived in Miami.