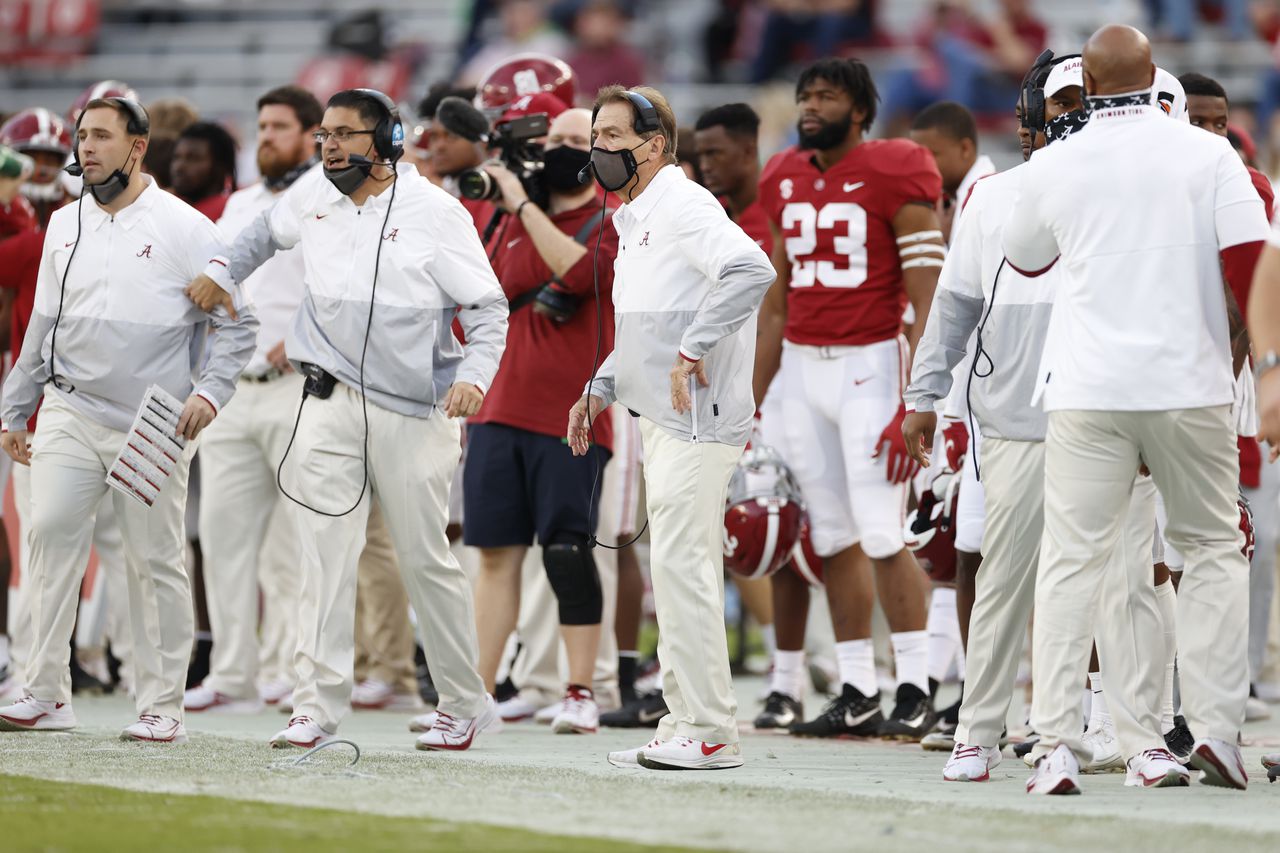 Alabama coach Nick Saban updated the status of some injured players after Saturday’s 63-3 win over Kentucky. Here’s what he said about these players and the game:

– The close end Miller Forristall was in uniform on the sidelines but did not play where Alabama started Jahleel Billingsley instead while using Kendall Randolph in blocking situations. Saban said Forristall has a sprained ankle and a “small shoulder” and he could have played. “I just decided, I told him, we should only play in an emergency if we need you,”

; Saban said. “We need to get you healthy, and the other guys have put most of the reps into practice over the course of the week.”

– The wide receiver Slade Bolden was not seen on the sidelines in the second half, where DeVonta Smith and later Patrick Surtain took over point-return tasks. Saban said the ball “twisted his ankle a bit,” adding, “I do not know what his status will be, but I do not think it is that bad. But we never know for sure.”

– On the whole game, Saban said that energy, intensity and attention to detail were “not what we wanted to be”, but they played better as the game progressed. “I’m really pleased with the way our players reacted in the game.”

– Saban said a good thing about the game was the number of players who played, saying “these guys are not that far from playing” and they needed the experience.

– Saban: “All in all, it was a good team victory.” He liked that the defense played in the second half. “We just have to keep building on that momentum and the rhythm we have, get some guys healthy and see if we can get started.”

When asked about the first touchdown pass to Bryce Young as well as the first touchdown runs by Jase McClellan and Roydell Williams, it said it makes him “really happy” to have production. “Everyone wants to score a touchdown, so I think that’s good,” he said.

– Saban said Kentucky hit early game runs on erroneous holes of Alabama’s defense as well as mental errors in moves and shifts. Players became more accustomed to movements and shifts as the game progressed, and coaches made corrections. “These are really many of the things we have worked on [in practice], it was just a matter of being a little scared to do what they knew was right in the game, ”he said.

Saban had a strong reaction to Kentucky’s dominant possession time in the first half, saying, “last time I checked, you get nothing for possession time.”

– When asked about Landon Dickerson, Saban complimented him and said he influences other games in a positive way.

– Saban said Jahleel Billingsley had a “really good week in practice” and played “really well” in the game. “We need more guys like him who are play-maker types to be able to step up and play, and maybe this game today will give him some confidence,” Saban added.

– On Mac Jones’ interception, Saban said the quarterback “got a little greedy” and he did what Saban calls a “hope” throw against tight coverage. The message that went into the game was to take Kentucky’s defense was to give, and Jones did not do it on the piece, Saban said.

– Saban said the defensive discipline was better in terms of fewer penalties. “When we first came into the game, I thought we were playing with really good focus,” he said.

Asked how DeVonta Smith “maintains the core values ​​of the program,” Saban said there is no player who does it better than Smith. Saban noted that Smith will talk to other players one-on-one about how to improve. “Smitty came back because he wanted a good, productive year,” Saban added. “He wanted to get a little bigger and a little stronger and improve his draft status. I definitely think he’s demonstrating it in a really, really positive way so far this year. ”

Mike Rodak is an Alabama beat reporter for the Alabama Media Group. Follow him on Twitter @mikerodak.