What he said at his Michigan news conference

Twenty-five years after he first left, Juwan Howard has returned to Ann Arbor.

The former Fab Five star was formally introduced on Thursday as head coach of Michigan basketball just over a week after he was hired.

Howard, a longtime NBA player who was an assistant with the Miami Heat from 2013-19, returns to a program very different from the one he left.

His job: To continue the success of former coach John Beilein and create a new legacy, one separate from what he did as a player.

Here is what Howard said in his formal introduction as the next UM head coach:

Howard emotional about his return

Howard was clearly emotional during his introduction. He wiped away tears before he walked up to the podium, and then needed a moment to compose himself before giving his opening remarks.

This is a homecoming for him, and a chance to show his family the place that shaped him during his formative years.

"Last time I walked off the Crisler Arena court, I never looked back and thought I was ever the head basketball coach of the University of Michigan," Howard said. "Honestly, I didn't like coaching. I didn't want to be a coach. But I always was a coach on the floor. And so the passion that I have for this game, playing 19 years in the NBA, I grew up. I have always wanted to be humbled by learning but most importantly try to help inspire others. My 17th year in the NBA, I started to get itch.

Howard said he found Out that John was leaving Michigan while he was preparing to interview with the Minnesota Timberwolves.

"My answer has always been – there is only one job, there is only one school that I would Look back and pursue on the collegiate level, "Howard said." And that's the University of Michigan. So it was unfair at the time that was at the time, I'm preparing for a Minnesota Timberwolves interview, and in the back of my mind, all I could think about was Michigan, Michigan, Michigan.

"And I'm Not afraid to be honest. The general manager / president of the Minnesota Timberwolves, I know he's out there listening. And I have a ton of respect for him. He understood why I chose Michigan. that way. ” 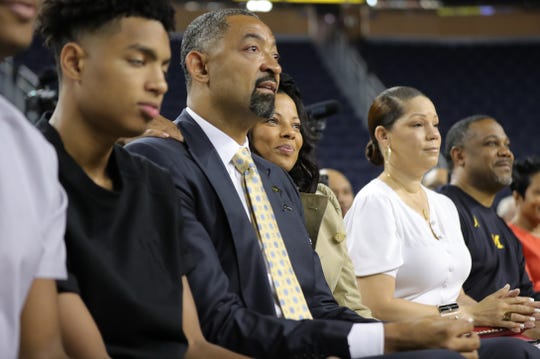 Howard will revisit talk about the banners

Howard was asked about the Fab Five Final Four banners, which were taken down in the aftermath of the Ed Martin scandal

He anticipated the question – and says t said re-raising the banners will be a topic of discussion in the future.

"I knew that question was coming," Howard said. "Nineteen ninety-two, 1993, a fun time." Jimmy (King) can attest to this. Hard to make it possible. Sacrificed a lot. Was through a lot of adversity. Earned every minute of it.

"That's something on the table that we as a staff, Warde, Mark will definitely revisit. When? I don’t know. Can't make any promises. That's all I can say to this point. ”

Howard: “I'm very humbled that a lot of NBA teams recognized the hard work that I put in the six years I coached with the Miami Heat. When I get into something, I'm all in it. I'm sure there are a lot of people out there who are a first-time head coach. Well, you've got to start somewhere. ”