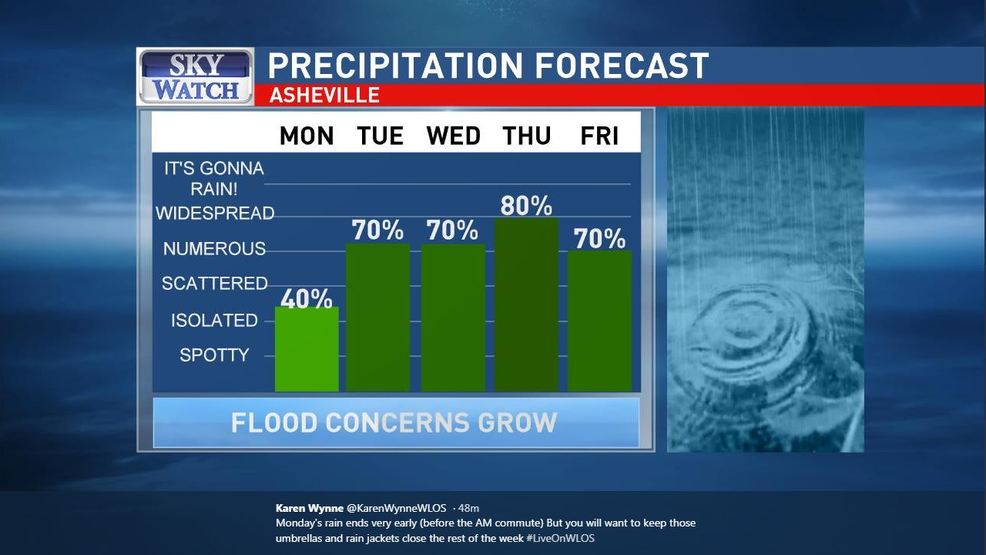 Get ready for a wet Sunday night, with periods of heavy rain late as a warm front moves across our region. Some locations could pick up one half to three quarters of an inch of rain.

They will increase as the week goes on. There's a law week ahead, with flooding possible in some parts or WNC.

Greater Greenville-Spartanburg could also be affected by heavy rainfall.

A series of disturbances keeps rain in the forecast every day through Sunday, with 5-8 "of rain possible in our southwestern mountain counties over the next seven days.

This persistent wet pattern will likely lead to river flooding and, possibly, some flash flooding from midweek on.

Be prepared to move to higher ground in a Flash Flood Warning issued for your area and do not drive across flooded roads.

A cold front moves through before sunrise on Monday, which will push most of the rain to the east of our area before morning commute time.

Expect clearing skies and brisk northwesterly winds as dry high pressure moves in. With the sunshine, Monday should be a warmer day for the most of us, with highs in the lower to mid 50's.

Rain returns on Tuesday afternoon. th cooler air in place, some of which could turn to a wintry mix in the higher elevations Tuesday evening. Don't forget to check out the supermoon if night skies are clear!

Early Wednesday morning there is a better chance of wintry weather and some light snow accumulations before the mix turns back to rain.