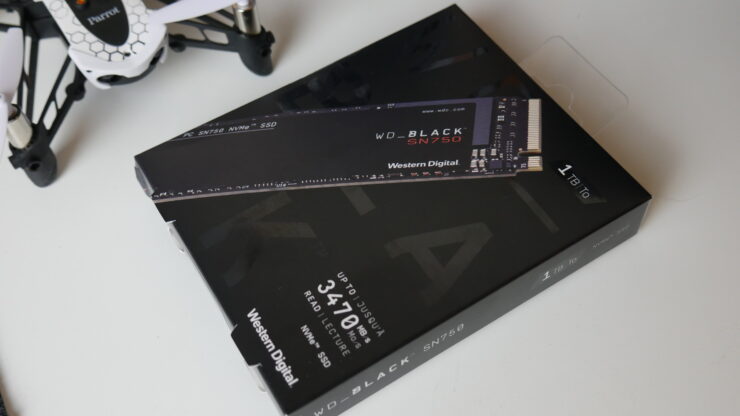 Western Digital has given us a chance to take a look at their new high end NVMe lineup the WD Black SN750. Today we are looking at their 1TB ($ 249.99) model, but will also be available in 250GB ($ 79.99), 500GB ($ 129.99), and later available in 2TB. One of the unique aspects of the WD SN750 NV is powered by the fact that it is 100% built in house, so nothing is sourced and that allows Digital to control their entire product stack to level that puts them on a competitive level with the other major players in storage

They seem to have made a solid transition into the NVMe world and are competing well last year in that WD NVMe Review. Before we get to this performance review I want to point out I have limited access to other NVMe drives but included all that I had in the graphs.

The box is a box, I mean it's black with some glossy text. Not a whole lot to write home about. The drive itself is nice and black with minimal branding and the text is not so bold that it distracts. WD Black SN750 NVMe SSD Product Specifications

Since this is my first proper storage review it has the opportunity to setup a test bench configuration that would be used going forward. I decided to stick with my Z370 based Core i5 8600K GPU test bench paired with 16GB DDR4 3200 RAM and decided to go dedicated GPU. The reasoning for this was simple when I had to remove the GPU to access the secondary m.2 slot so that I could run the tests. Before starting the tests I loaded the NVMe drive up to 60% capacity so that the testing would not be run on a clean empty drive. This is something I plan to do on all SSD tests going forward regardless of size. 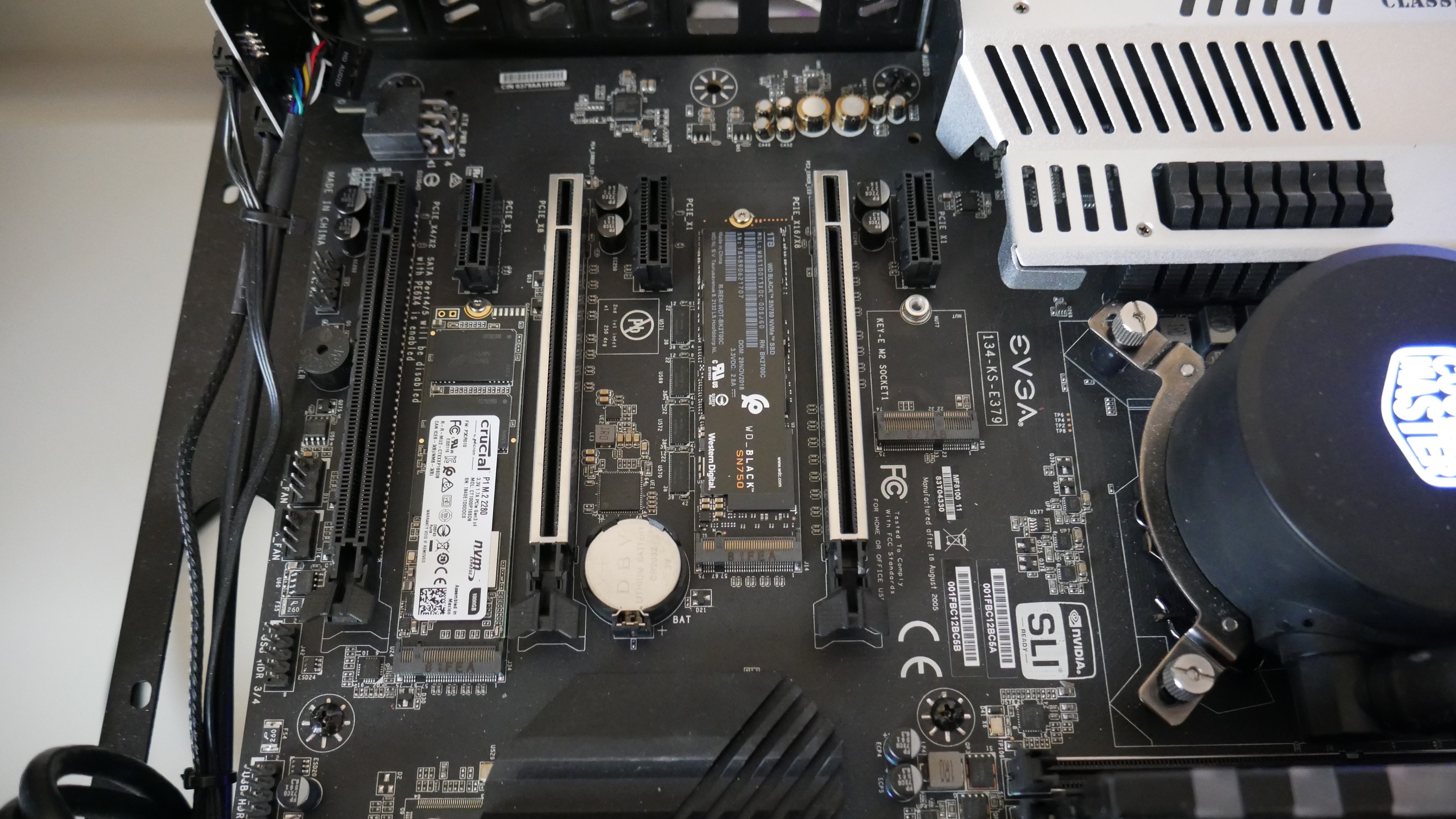 The ATTO Disk Benchmark performance measurement tool is compatible with Microsoft Windows. Use ATTO Disk Benchmark to test any manufacturers RAID controllers, storage controllers, host bus adapters (HBAs), hard drives and SSD drives and notice that ATTO products will consistently provide the highest level of performance to your storage. sticking to focus on the 1KB Read / Write I can turn up your nose, but move it up to 4KB reads and the story changes massively. The WD Black SN750 completely obliterates the other drives in the lineup. This is the moment I started to realize just how slow my personal ADATA SX6000NP really is

CrystalDiskMark is a disk benchmark software Made by a Japanese coder named Hiyohiyo and is one of the simplest and most frequently used tests for storage due to its simple and easy to understand UI. It measures sequential reads / writes speed, measure random 512KB, 4KB, 4KB (Queue Depth = 32) reads / writes speed, select test data (Random, 0Fill, 1Fill). 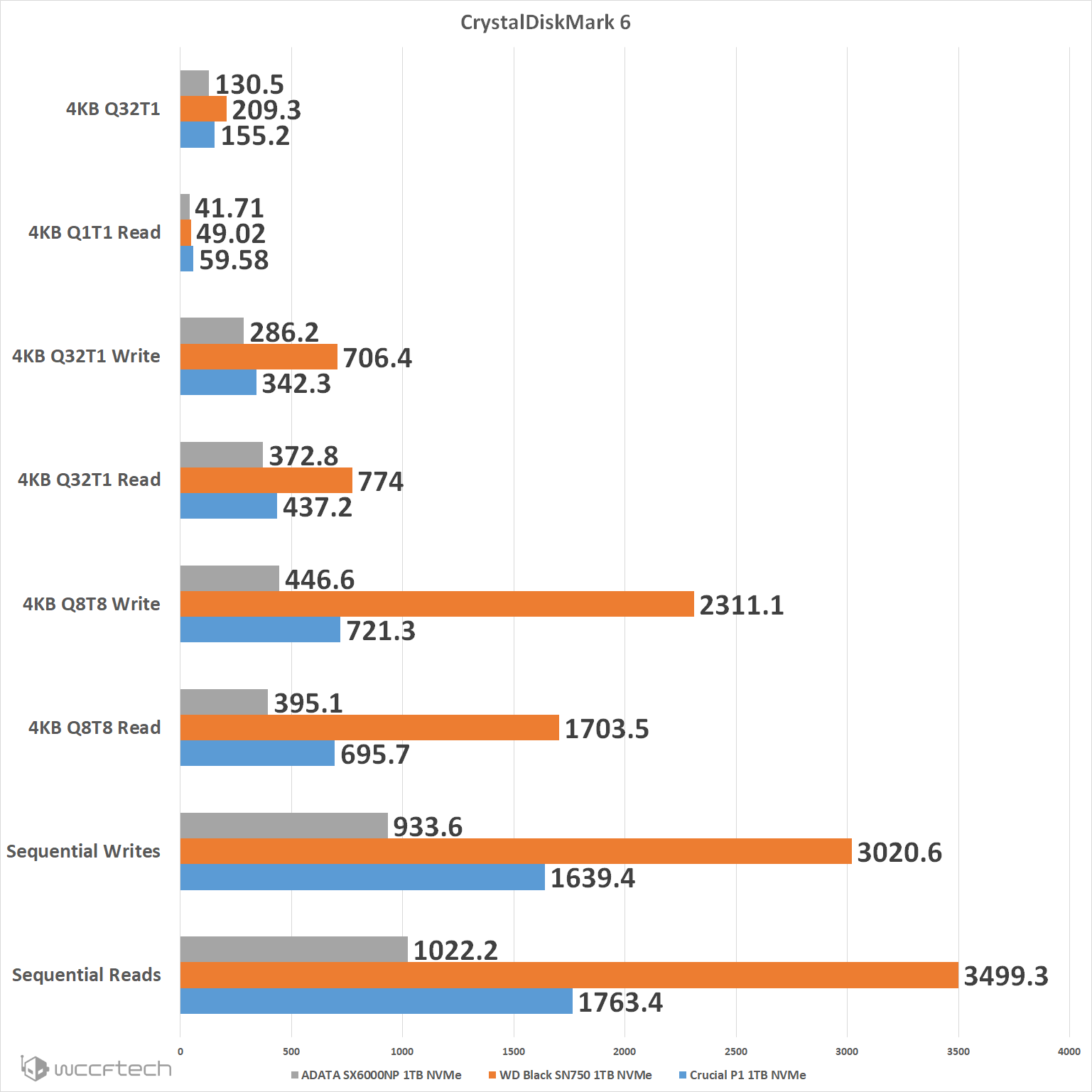 AS SSD is the opposite of ATTO if it uses incompressible data rather than compressible data and simulates the worst possible scenario imaginable for an SSD which gives the best understanding of performance when pushing the drive to its limits.

We separate the IOPS and MB / s in the results for ease of reading. 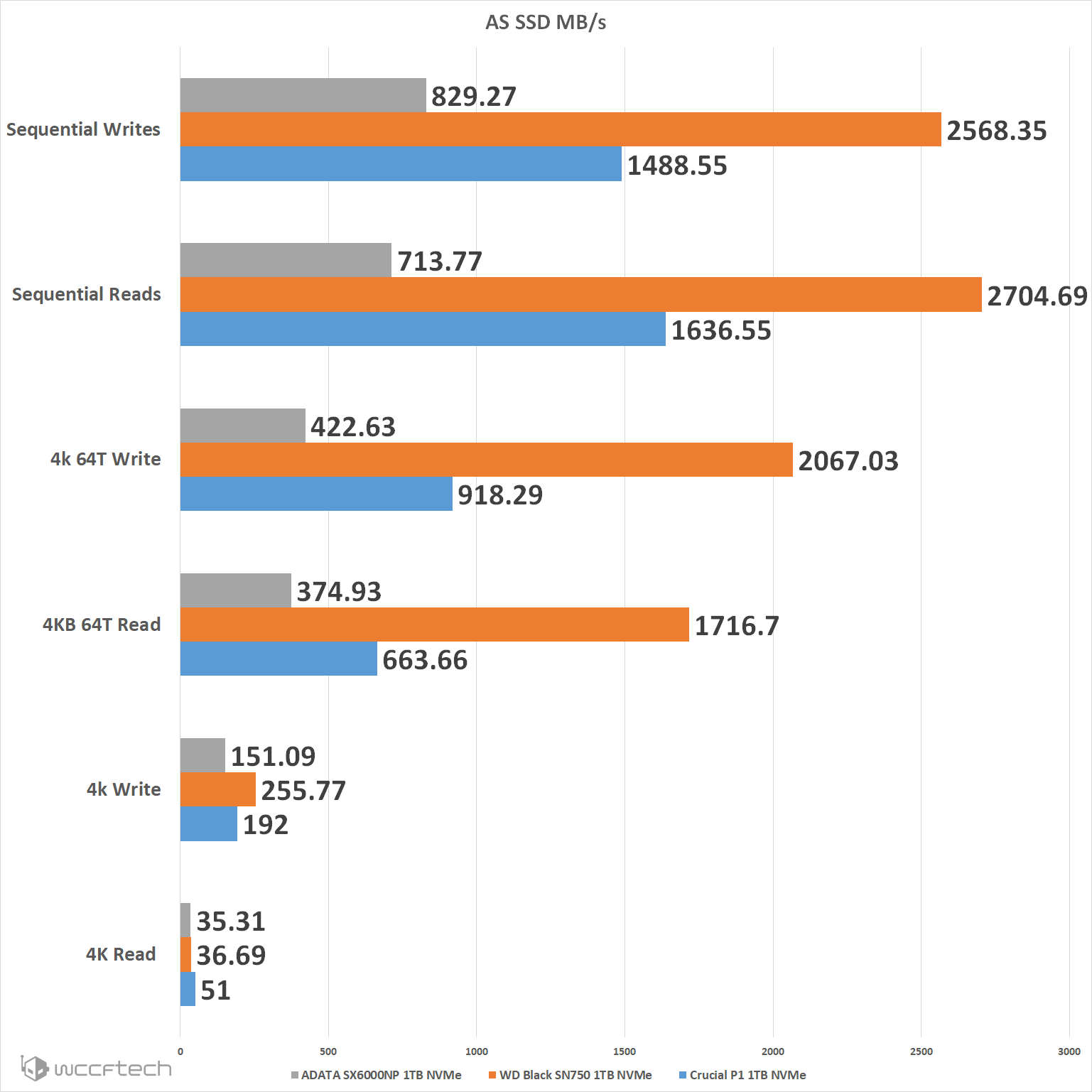 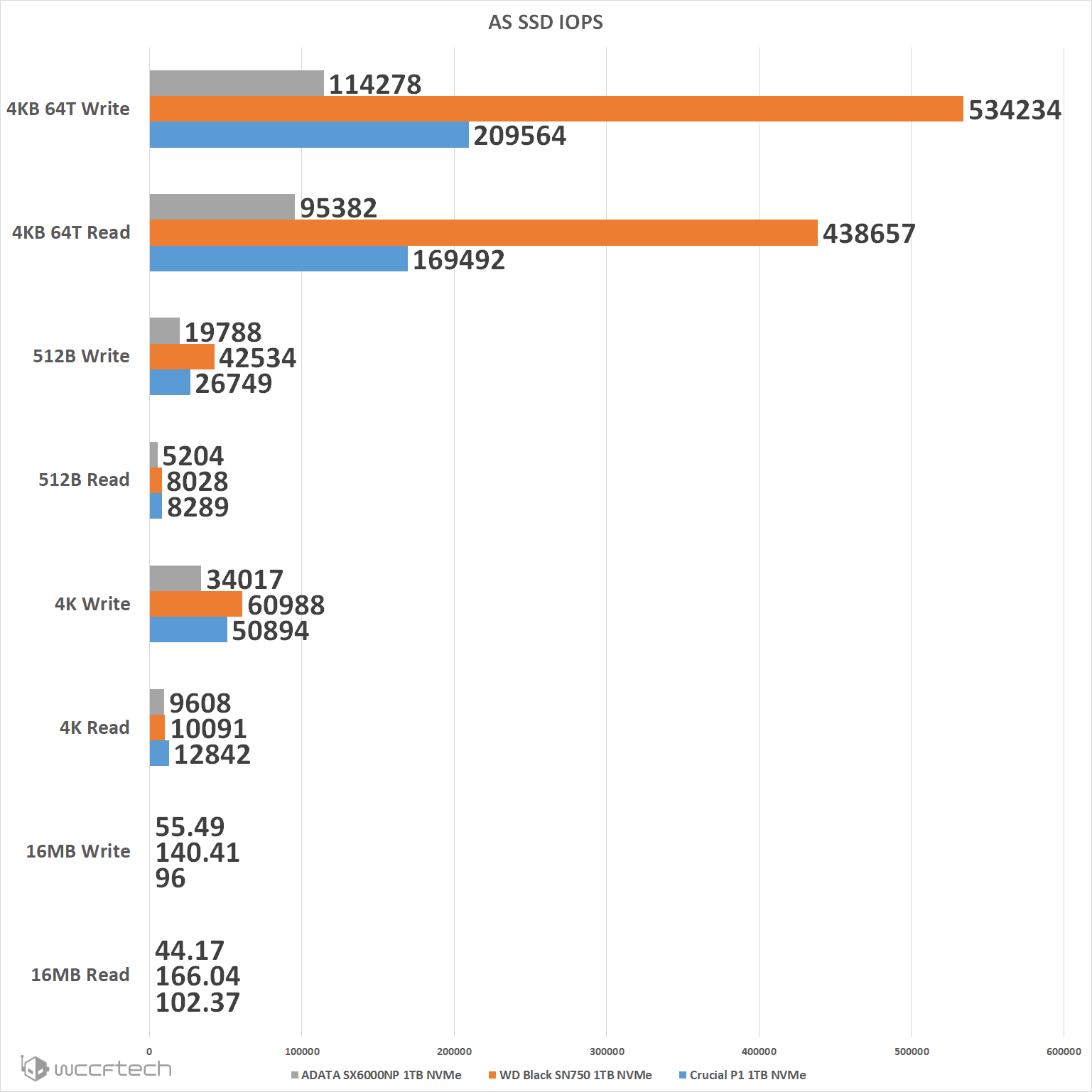 At 4K Reads / Writes the delta Between the Crucial P1 and WD SN750 were pretty slim in transfer speeds and IOPS. Once you move, the same story we saw in previous tests returns showing the massive uplift in performance. Yet again reinforcing that just because something is an NVMe SSD is that it is all the same, there is a lot of room for variations in performance.

The SSD Dashboard for the WD Black SN750 is actually a bit more useful that I had imagined it would be. Expecting nothing more than a few to check diagnostics and the gaming mode I was pleasantly surprised to see multiple tabs and so much data given right off the bat, of course with a helping of WD ads on the sidebar. The front page gives you that "gaming mode" option right away if you want to keep the drive from going into low power state so that it's always at full tilt. Capacity numbers are right there and a life meter for your drive should help keep calm down the road if you are concerned with the health of your NVMe SSD. This is where we found the drive to idle at 47 ° C and get up to 66 ° C during load during tests.

The Performance Tab is just a constant graph showing Transfer speeds and IOPS, this was very useful for validating while running the above benchmark tools. Speaking of Tools, the Tools Tab brings all the functions like firmware updating, software updating, diagnostics, and clearing the drive all under one spot. 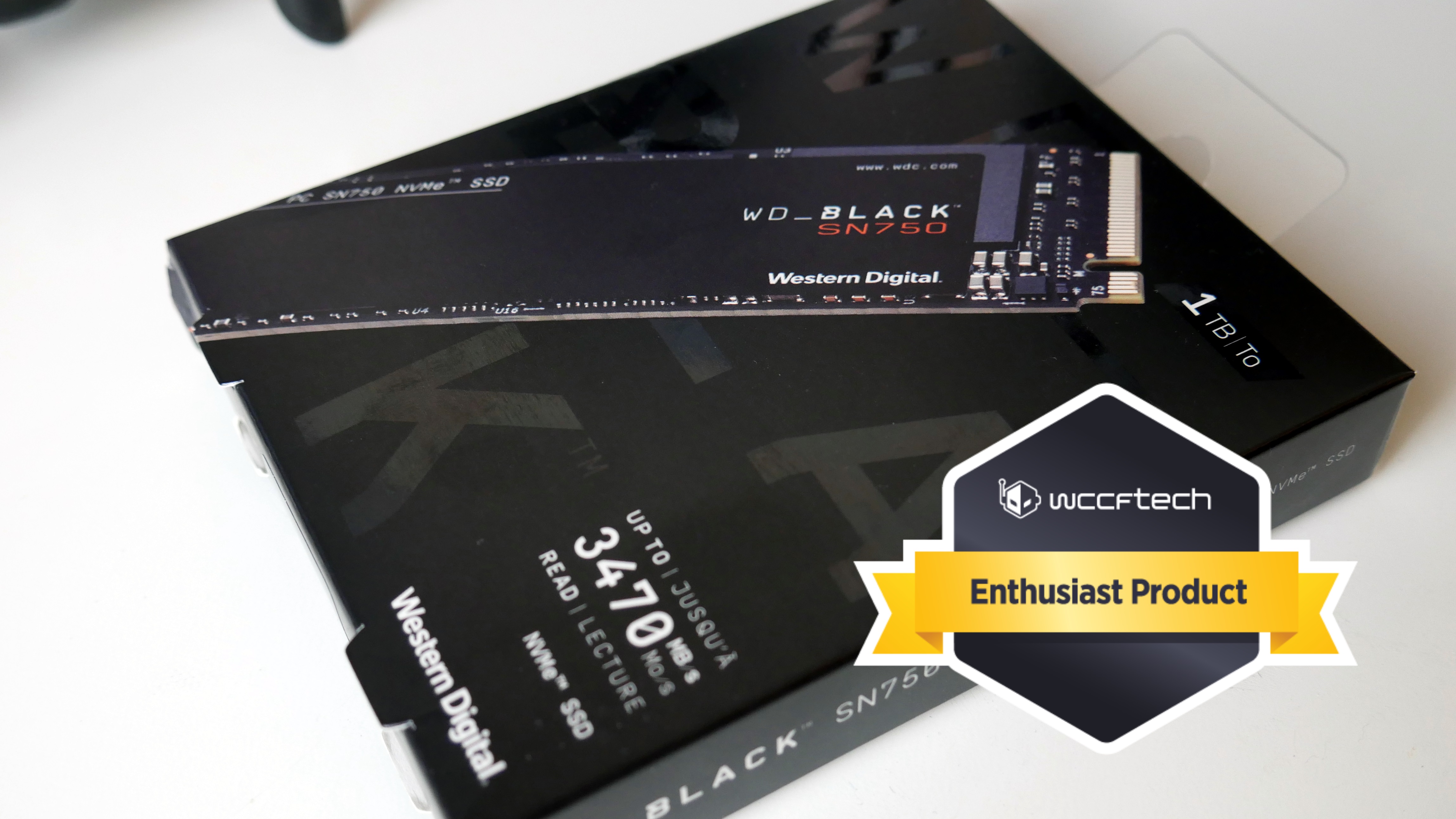 The Western Digital WD Black SN750 1TB absolutely dominates the NVMe that have been able to test so far. At current pricing the Crucial drive offers good value for money, but still the price uplift of the WD Black SN750 NVMe is more than worth the asking price with the massive performance boost. The SSD Dashboard is a nice addition and easy to navigate, but I'm not sure how excited I am about the 'Game Mode' since, subjectively, I couldn't tell whether it was active but I would rather leave it on than off . I have not tested the $ 250 neighborhood you should definitely have on your short list for consideration, once it launches that is. 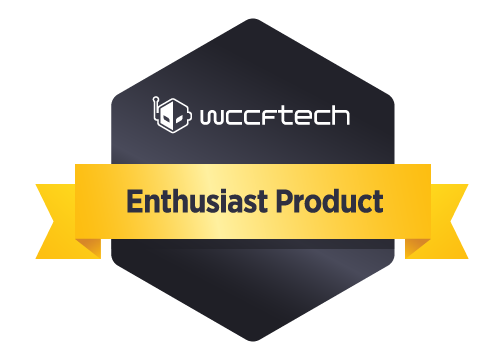 Fast and competitively priced high end NVMe SSD with a solid software suite to accompany it.