War of Will 'Great' Morning After Preakness Win 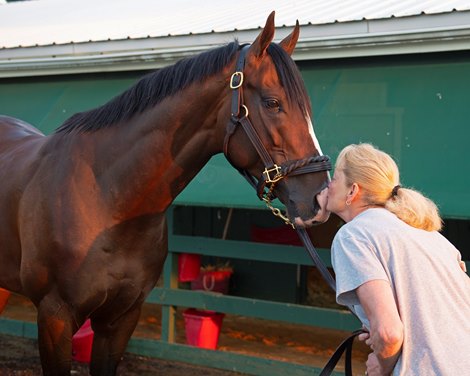 Mark Casse showed up at Pimlico Race Course before 6:00 a.m. May 19 to check on War of Will his Preakness Stakes (G1) wins.

Gary Barber's bay colt appeared to be in good order as he walked the shedrow with Kim Carroll on the shank, and was brought out briefly to the media before he was returned to his stall. He is set to ship to Keeneland Monday, where assistant trainer David Carroll will oversee his care, but he might not stay in the bluegrass long. On Sunday, Casse was bullish at a potential run in the June 8 Belmont Stakes (G1

"He's great this morning," the trainer said. "I would say there is an extremely good shot we'll be there (in the Belmont). Now it's just a matter of him saying he doesn't want to go, that would be just if he was lethargic or something (during) training." .

"There's only three Triple Crown races. They're pretty important, and I think if you can do it, you should do it. … The Belmont is the Belmont. It's the third leg of the Triple Crown. Preakness runner-up Everfast and third-place finisher Owendale are both among those under consideration for the 1/2 mile Belmont. So is Tacitus who bypassed the Preakness after running third in the Kentucky Derby Presented by Woodford Reserve (G1).

This story will be updated.