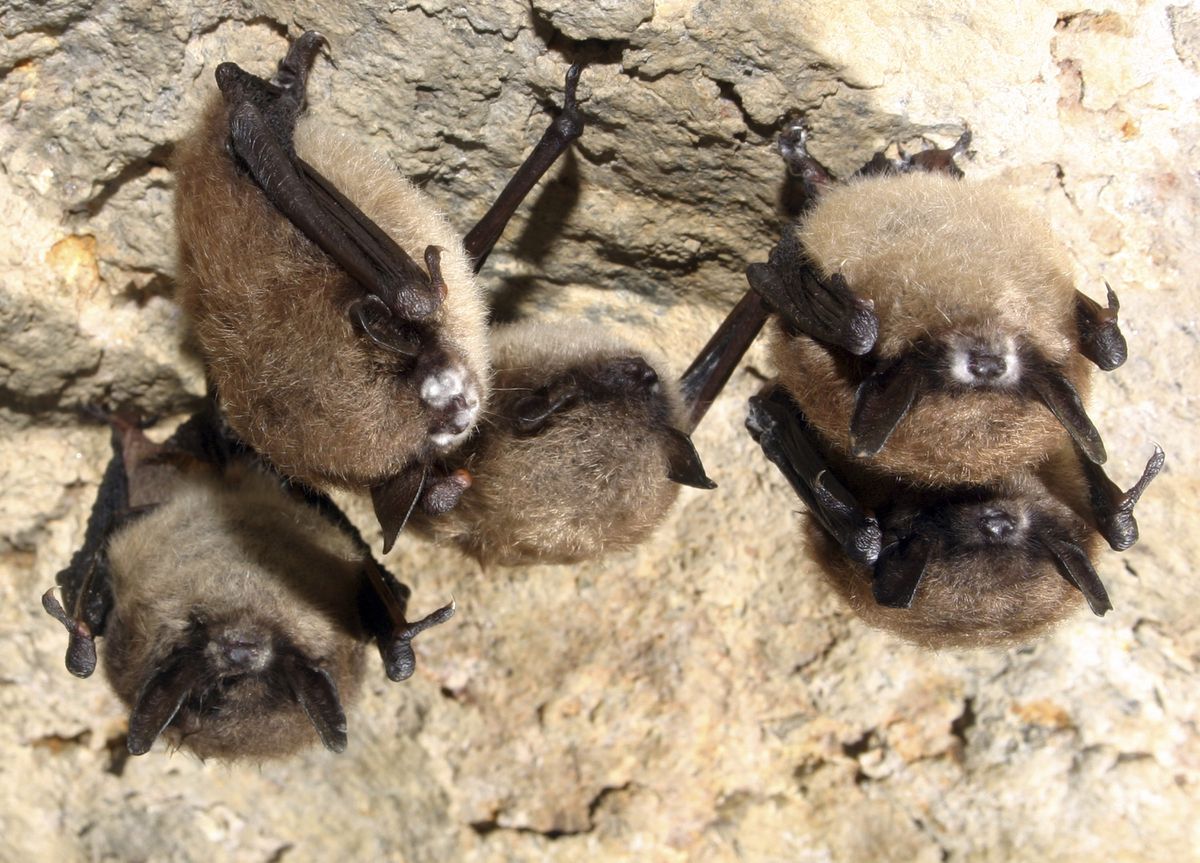 Hiking through the deep river hills ravine or Kelly's Run Nature Preserve in Holtwood, Pennsylvania, in southern Lancaster County, is not a walk in the park at any time. There are rock-hopping stream crossings, wet, mossy rocks to scramble over, and steep trails etched onto slopes.

Then imagine picking your way through it for three miles on a hot, moonless night with two people forced to constantly duck and weave under branches and rhododendron thickets because they have six-foot poles topped with sensitive microphones protruding skyward from the middle of their packs

That's what seven volunteers infused with grit and were doing on a recent Tuesday night, all in the hope of recording the faint feeding sounds of bats they cannot hear and rarely ever see.

The mission of a mission was borne out of wildlife tragedy, Millersville University students and volunteers from the public are three years into auditory surveys to try to locate the last survivors of four species whose populations have been populated by the white-nose syndrome fungal disease that has been out of more than 1

million bats in P ensylvania since 2009. Locating remnant populations and saving their habitat has become a national priority initiative, but the emergency has come so fast there are not enough scientists to tackle the task alone.

That's where Carter Farmer, a 34 -year-old student at Millersville University's Applied Conservation Lab, has stepped up.

Working under Aaron Haines, an associate professor of biology, she has secured university grants to buy bathe sensing equipment and software, and organized these nighttime forays into Southern Lancaster County

The 19 surveys carried out so far have been concentrated in five preserves owned by the Lancaster County Conservancy where construction – including the Atlantic Sunrise gas pipeline – and are present or could be in the future and could disturb roasting or colonizing bats on the brink.

"With all the climate change and pollution and construction, we're in such a time-sensitive situation, "says Farmer, a Manheim Township native working on a second degree. "Even though there is no cure (for white-nose syndrome), we are fighting against the clock to give some of them a fighting chance."

In the winter, the most vulnerable bats to the fungus are concentrated in caves. But in the summertime, they are migrating, feeding and roosting in trees, opening a window for efforts like this to locate them

Farmer hopes the citizen science protocol being done locally can prompt other communities to do the same thing.

] It's an hour before so when seven people converge from various parts of the county in the Kelly's Run parking lot near Holtwood. Duct tape and rubber bands are used to attach microphones to tent poles that Chad Mowbray, a recent Penn Manor graduate, and Tania Collazo, a Millersville University student from York, will carry like banners through the night.

Others participate in the survey will take recording background data, the locations of recording hits and counting the two mike bearers when to occasionally crawl – under obstacles so hundreds of dollars of sensitive equipment is not destroyed. The team is made of Adam Bert, 35, or Neffsville, Gordon Bosler, 64, or Lancaster, and Kaylie Beale, 21, or Lititz. Bosler and Beale are trained to become certified Pennsylvania Master Naturalists.

The microphones are designed to pick up the search and locate sounds bats make to zero in on insects. The sound waves bounce off the prey and instantly back to the bats in a very precise triangulation system called echolocation. Bats do with their eyes but this is more effective.

When the sounds are recorded, they go through two different bat identification software, one fed into a laptop Mowbray is staring at and another on a cellphone Collazo monitors. Each bat species emits at different frequencies and duration of sounds, although there may be some overlap. [At8:55pmnotquiteduskandafteracautiousinspectionofacopperheadsnakealongthetrailthegroupstopsinanopeningoverlookingtheSusquehannaRiverandtheHoltwoodDam

Near this spot about two weeks ago, both bat identification systems recorded a little brown bat, now, because of disease, one of the rarest bats in Pennsylvania. About 99 percent of their population has been wiped out in the state. In January, the little brown was classified as endangered by the Pennsylvania Game Commission.

The little brown is one of four decimated species in the local surveys. The others are the northern long-eared, the Indiana and the tricolored.

The group picks up the recordings of a red bat, doing bat well relatively well in Pennsylvania. Then, lightning strikes twice.

"There it is, a tricolored bat!" someone yells.

And we can see it as swoops and plucks bugs out of the blue sky thrillingly close to us.

Even with separate positive readings, this is not proof that we are observing a weird bat. Only catching the bat itself would do that. But the recordings will be sent to other agencies. If confirmed, the presence can force any construction near to coordinate with state agencies to minimize disturbance.

The rest of the night is spent marching under the canopy of the forest. Some bats prefer open areas to hunt insects, but others opt for forest edges or the forest interior. At 11:14 p.m., after one short wrong turn, we are back in the parking lot and recording ceases. In addition to the possible rare sighting, we have seen more common red, evening, big brown and hoary bats. About the three summers of surveys, the project has picked up the calls of all 10 bat species in the state.

Such strenuous efforts are appreciated and valuable, says Greg Turner, a wildlife biologist with the Pennsylvania Game Commission, the agency responsible for bats' welfare in the state. "Just knowing where the species are and that they are active is a good benefit. In the winter the bats are bouncing all over the place. They are still searching for what they want and get some of that information in the summer is quite valuable . "

Farmer hopes to keep surveys weekly the rest of the summer and the public is invited to assist. Volunteers may be asked to scout survey routes during the day, or assist with equipment and data during night surveys. If interested, contact Farmer by email at carterfarmer @ gmail. com.

"These citizen science opportunities will provide students and enthusiasts with an exceptional learning experience that expands their understanding and active engagement in support of conservation in our community," says Lydia Martin of the Lancaster County Conservancy.

A workshop and hike in the Climbers Run Nature Preserve, 226 Frogtown Road, Pequea, will be held from 4-11 pm Aug. 10. The event is being held at the Lancaster County Conservancy in partnership with Millersville University, Bat Conservation and Management Inc. and the Pennsylvania Master Naturalist program.

Lessons from the UK on a more contagious Covid-19 variant