Visualization of regions of electromagnetic wave-plasma interactions surrounding the Earth 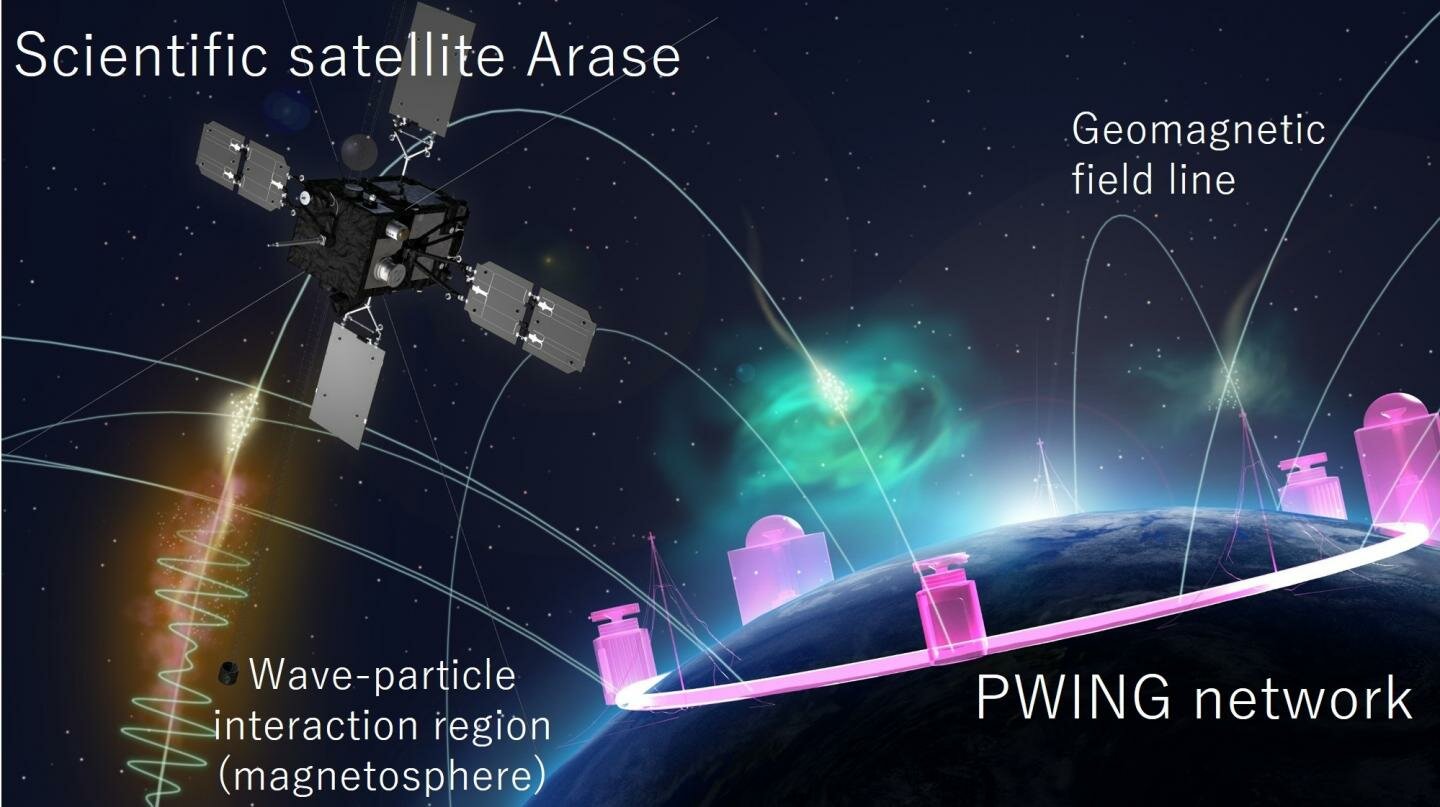 Using the scientific satellite Arase, which investigates dynamics of Van Allen belts as well as geospace storms, the team simultaneously captured not only chorus wave packets in the magnetosphere, but also transient auroral flashes of several hundred milliseconds about 30,000 kilometers distant from Arase. , generated by chorus wave-particle interactions. In order to simultaneously capture aurorae and chorus wave-particle interactions, which are related to each other, and scientific satellite is required in an appropriate orbit as well as an observation network on the ground that realizes conjugate observations with the satellite.

The research team developed a world-leading electromagnetic wave measurement system which was included in the Arase satellite, and established PWING (study of dynamic variation of Particles and waves in the INner magnetosphere using Ground-based network observations) covering the entire Earth ( but mainly in the northern hemisphere) longitudinally along almost the same geomagnetic latitude. The research team traveled to each PWING international ground base to install new high-sensitivity cameras and other instruments (see "Observation News" in PWING web page). Thus, it was possible to capture details or chorus waves by the Arase satellite as well as to capture related aurorae from any longitude and at any time (Figure 1). A flash aurora observed at Gakona, Alaska, one of the PWING international bases, and which is connected with the Arase satellite along the geomagnetic field line, showed spatial and intensity. Variations of the order of hundreds of milliseconds, which corresponded with those of the waves in the magnetosphere (Figure 2). This observation revealed that a flash could become a display showing spatial developments of wave-particle interaction regions including chorus waves.

Intensity and spatial changes of aurora captured on the ground have visualized details of wave-particle interaction regions, which could not be captured by point observations using a scientific satellite. The observation has confirmed the geomagnetic north-south asymmetry for the first time. The observed variations indicate not only spatial evolutions along geomagnetic field lines at effective resonance of electromagnetic waves and electrons (observable as time-dependent changes of auroral intensity) but also evolutions across geomagnetic field lines (observable as spatial changes of auroral morphology). The observation also suggests rapid precipitation, in hundreds of milliseconds, of energetic electrons into the atmosphere, which may bring about changes of the atmospheric composition.

The present study reports previously unknown spatial developments of wave-particle interaction regions across geomagnetic field lines. It presents analyzes using a scientific satellite and a ground observation network. In the future, more characteristics of a general nature should be revealed by analyzing a large number of flash auroras. However, there might be difficulties in analyzing the very large data sets at conventional visual observation, since it has now been found that such aurorae shows details of spatial developments of wave-particle interaction regions having a duration of only hundreds of milliseconds.

Nonetheless, the research team resolved this problem using artificial intelligence (AI). With AI technology, it should be possible to make hazard maps of the electromagnetic environment of the magnetosphere, which will contribute to safe and secure space exploration. It is also known that chorus wave-particle interactions take place on other magnetized planets. The scientific mission Mio was launched in 2018 to study the magnetic field of Mercury. It is equipped with a copy of the electromagnetic wave measurement system developed by the team.