Vice: A portrait of an American corporate-military gangster

Vice : A portrait of an American corporate-military gangster

By
David Walsh and Joanne Laurier


Written and directed by Adam McKay

In May 2006, referring to Dick Cheney, WSWS editor Bill Van Auken observed that if ever there were "an individual who personifies contempt for democratic rights, it is the American vice president." Universally recognized as the most powerful holder of that office in US history, Cheney has been the official most identified with the Bush administration's policies of military aggression, domestic spying, government secrecy, and torture, and its wholesale assault on the US Constitution.

Van Auken's article, entitled "Cheney lectures Russia on 'democracy," went on to explain that the Bush-Cheney cabal had systematically erected "the framework for a police state in America over the past five years, while repudiating international law and asserting the right to wage unprovoked wars and kidnap, torture and murder anyone — including US citizens — who it designs as an 'enemy combatant'. ”

The B ush government had established a network of secret prisons and concentration camps like Guantanamo and Abu Ghraib where tens of thousands were without trial or even charges. "The vice president," the 2006 article noted, "has been the strongest advocate of unfettered executive power, claiming that the president, as the commander-in-chief, can ignore virtually any law he chooses."

In regard to the Bush-Cheney administration, WSWS writer Patrick Martin pointed out in those days to an unprecedented development, the "rise to the pinnacle of the American political system of elements of a gangster character." Amy Adams, Christian Bale, Sam Rockwell and Andrea Wright in Vice

5), attempts to bring to life a good many of these elements and episodes. Ambitious and uneven, the film is often a devastating portrait of a corporate-military gangster. Its greatest political weakness is its failure to address the complicity of the Democratic Party in the prosecution of the neo-colonial wars, drive toward authoritarian rule and growth of social inequality.

Nonetheless, there is a good deal of valuable and creatively treated. material here. McKay's work concentrates on the period 2001 to 2009, with a brief excursion into Cheney's early life and political career.

Narrated by Kurt (Jesse Plemons), a fictitious, working-class veteran of the Afghanistan and Iraq wars, the film opens In some underground chamber with Cheney (Christian Bale) and other White House officials reacting to the September 11, 2001 terrorist attacks on the World Trade Center and the Pentagon. The narrator explains that while “fear, confusion and uncertainty” prevailed among those in attendance, the vice president “saw something no one else… He saw an opportunity.” It is a sinister and ominous sequence.

Vice proceeds to a flashback of Cheney in Wyoming in 1963 drunk at the steering wheel of his car. Arrested twice for driving while intoxicated, the youthful college drop-out receives a lecture from his "high school sweetheart," the designing and scheming Lynne Vincent (Amy Adams), to the effect that he should stop acting like a "big fat piss- soaked zero "and straighten himself out.

Five years later, Cheney goes to Washington as part of an internship program. Donald Rumsfeld (Steve Carell), then an official in the Nixon administration, takes him under his cynical, sordid wing. When Cheney asks, "What do we believe in?" Rumsfeld merely roars with derisive laughter. While in the White House, Rumsfeld and Cheney are on a conversation between Richard Nixon and Secretary of State Henry Kissinger (Kirk Bovill) in which they discuss the bombing of Cambodia. The filmmakers stage a scene in a Cambodian village where the local inhabitants are going about their business moments before being blown to pieces by American bombs 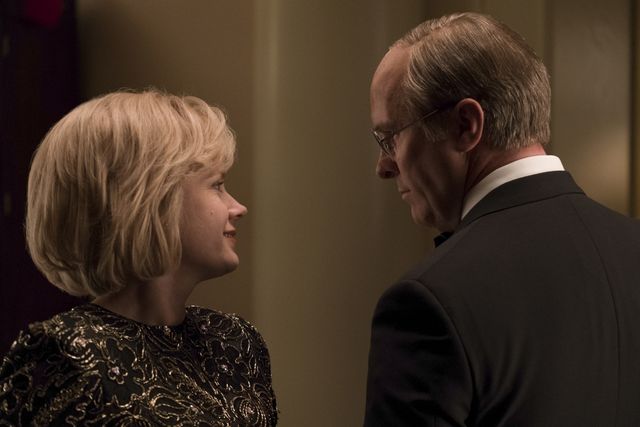 At one point, referring to the US government, Cheney tells Rumsfeld that "the plan is to take over the whole place".

Cheney runs for Congress from Wyoming in 1978, although his wife, due to his illness, does a good deal of the campaigning for him. She resorts to right-wing code phrases, claiming, for example, that "all of us will lose our jobs" because of affirmative action. In New York City, she goes on, "they burn bras, but in Wyoming we wear them."

During the years of the Clinton administration, with Cheney and the Republicans out of power, Vice satirically Imagine an alternative direction to Cheney's life. The credits roll, we learn, in fact, the Cheneys lived out of their lives supporting their gay daughter Mary (Alison Pill) and raising golden retrievers. No such luck…! Vice shows Cheney throwing his gay daughter under the bus in the interests of his other daughter's political ambitions.)

] After Cheney polls last among possible candidates for the Republican presidential nomination, he and his wife mull over the possibility of seeking the vice presidency.

Vice spends some time on the process at which Cheney becomes the vice presidential candidate alongside George W. Bush (Sam Rockwell) in 2000

At first, Cheney rejects Texas governor Bush's sacrifice to be his running mate. However, somewhat in opposition to his Machiavellian wife, Cheney begins to envision a completely different role for the vice president. Along these lines, he tells Lynne that "No one has shown the world the power of the American presidency," implying a Bush-Cheney administration will realize that potential.

A memorable scene, Bush, chomping on a chicken leg, listens while cheney first points out that he is currently the CEO "of a large company [Halliburton]" and that the vice presidency "is a mostly symbolic job." He then goes on to lay out his modest conditions for accepting the position: " However, if we came to a, uh … different … understanding … I can handle the more mundane … jobs. Overseeing bureaucracy … military … energy … and, uh … foreign policy. "After a moment's break, Bush replies," Yeah, right! I like that! ”Later, when Cheney intones," I believe … we can make this work, "Bush claps his hands and exclaims," ​​Hot damn! "The moment captures something truthful in the way that only drama can. 19659006] Once having accepted the vice presidential slot, Cheney's ambitions swell to the proportions of Shakespearean villain. Indeed, McKay stages a dialogue between the Cheneys, with Dick as a mock-Richard III and Lynne a mock-Lady Macbeth. There's something frightening and almost maniacal about Cheney's expression here.

The next eight years pass in a series of increasingly nightmarish episodes:

It is difficult to think of another American movie in recent years that has attempted to cover this much territory and with a sharply critical tone. The acting is superb. Bale transforms himself in astonishing fashion. Adams, Rockwell and Carell also stand out. The consensus of the performers presumably had something to do with their commitment to the subject matter, which also attracted Molina and Naomi Watts into cameo appearances. Brad Pitt and Will Ferrell served as co-producers. The music by Nicholas Britell effectively comments on and punctuates the drama.

Vice is a disturbing work. At its best, it is a front to complacency — and the honesty with which it represents various events and processes argues, whatever the filmmakers may think, that something is fundamentally rotten with the American political and economic system. We see before our eyes a handful of ultra-wealthy conspirators organize bloody foreign wars and take giant strides toward dictatorship at home. The filmmakers recognize that the Bush administration represented a significant change.

However, along the same lines, this is where the weaknesses of the film lie. Inevitably narrowing character of film biography as a medium, Vice treats Cheney as the initiator and evil genius of a historical process of which he was merely in particular and noteworthy symptom. It lacks insight into the decay and crisis of American capitalism and the rightward of both parties.

In its consideration of the crack-up of American democracy and the unrestrained rule and role of the wealthy, McKay and his colleagues leave out of the picture the other big business party, the Democrats, aside from one image of the hot ring Hillary Clinton. Jimmy Carter is positively treated as the innovator of alternative energy and in a brief scene, that probably sums up the filmmakers' illusions, we see cheering crowds at Barack Obama's inauguration in January 2009.

The film never asks (although McKay has made criticisms of Obama for this in interviews): why doesn't Cheney and any of the other mass murderers prosecuted? Why did Obama insist on a seamless transition from this pack of criminals? What about his administration's drone strikes and the "kill lists"?

Moreover, after a viewing of Vice the viewer might reasonably ask him or herself: why, with the demon Cheney safely out of office for ten years, all the horror continuing in the Middle East and why is the rich in America grabbing more wealth than ever? [aninterviewMcKayexpressedthehope"ifwegetouracttogether"thatCheneyandBushwill“becalledoutfornearlyamillionpeoplekilledinIraqforclearlyinsomecaseswarcrimesthatshouldhavebeenprosecuted”

This is true if it goes, but it's rather passive. This is the stance of someone removed from the seething anger of the American population of poverty, the destruction of living conditions and endless war. This shows itself in Vice in a tendency to blame the population for the war and the overall conduct of the Bush administration, despite the largest anti-war demonstrations in history in February 2003. The Democrats did everything in their power to suppress that sentiment and have now become fervent proponents of the Middle East and confrontation with Russia.

Aesthetically, these issues contribute to the film's unevenness and its fluctuations in tone. There are patches of facetiousness and unseriousness, and a jokiness in certain characterizations.

Vice has stirred up a hornet's nest in the American media. Cheney's friends in the right-wing press ( National Review, Forbes etc.) have been delinquent and venomously come to his (and their own) defense. Various liberal critics condescend and pick points, but McKay's work does not make them happy, which is all to the good.

Vice valuable and effective, in the end, is the filmmakers' genuine regret. They despise the warmers responsible for some of the greatest war crimes of modern times. They deserve credit for that.

To fight this blacklisting: