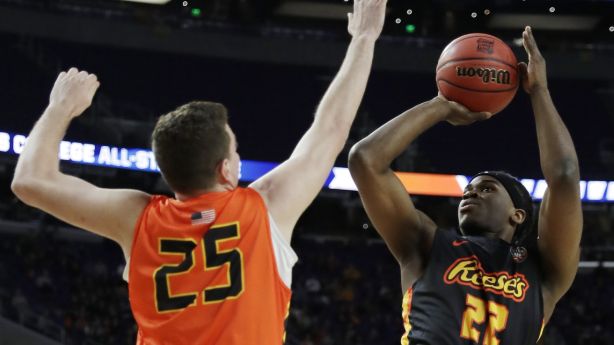 SALT LAKE CITY – If Darius Bazley had been in New York, he would wear a Utah Jazz hat when he took the stage after being elected with No. 23 – even though he never fits the jazz.

The Utah graphics, flashing around the stage in the Barclays Center, were the closest thing to a jazz presence at the 2019 NBA draft.

However, Jazzen was fortunately out of the first round after using their No 23 pick as part of a package for trading for veteran point guard Mike Conley. But there was still some work to do.

Utah stepped in on Thursday with just another round pick, it ended up taking three players between picks 50 and 58. Jazz took Jarrell Brantley from the College of Charleston at No. 50, Hofstra guard Justin Wright foreman at no. 53 and Yale Wing Miye Oni at No. 58.

Almost five hours after Zion Williamson crossed the stage as number one, Jazz came in for fun. Utah dealt a future second-round pick to Indiana for the 50th pick to take Brantley, according to reports.

Brantley worked for jazz on June 15 against better-known prospects for the tales Talen Horton-Tucker, Luquentz Dort and Jalen McDaniels.

The 6-foot-7-forward averaged 19.4 points and 8.4 rebounds in his senior season. Brantley has also shown the ability to hit the 3-point shot. As a junior, he was 38% from deep at 3.3 trials per year. Game.

"From a small conference, you see a guy who can dominate at times," said jazz general manager Justin Zanik.

Players from smaller conferences were the theme of the jazz draft. Brantley and Wright-Foreman both played in the CAA with Oni, who played in the Ivy League.

"These guys were all well-known goods with a very successful career," Zanik said.

Oni and Wright-Foreman were named Player of the Year in their respected back-to-back seasons conferences.