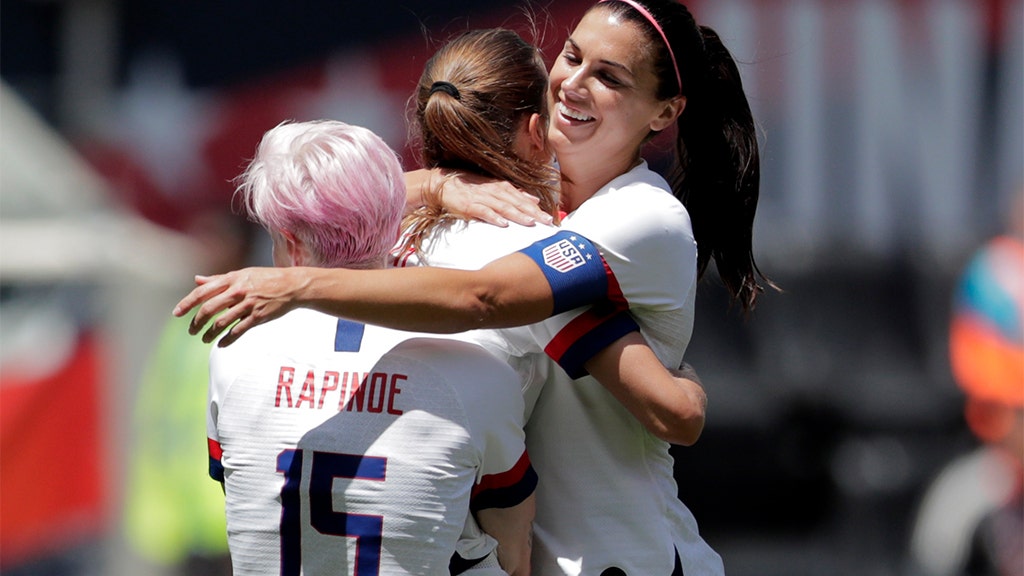 HARRISON, N.J. – Cheers or "Let's Go U.S." from an energetic crowd in New Jersey's Red Bull Arena gave the US women's national soccer team an emphatic farewell as the 23 ladies head off to Europe for the 2019 Women's World Cup.

Tobin Heath – playing again in front of her home crowd – opened up the scoring in the 11th minute after several minutes of high press from the American women.

ALL COVERAGE OF WOMEN'S WORLD CUP

A poor clearance from Mexico's goalie, Cecilia Santiago, fell into the feet of Heath, whose quick footwork got her around one defender and the ball into the back of the net.

The defending World Cup champions went into the game 2-0 in their off-series after beating New Zealand and South Africa earlier this month.

Coach Jill Ellis, who made some unexpected changes at halftime by moving various players into different defensive positions, said the match helped the team check off forwarded to Europe.

At halftime, Ellis moved several attacking midfield players into more defensive roles in the back line. She said they were pre-planned changes that showed the team's depth and versatility.

"It's always good to have (and) try players who can adapt and play any position needed," she added.

The substitutes in the second half made the impact with Carli Lloyd, 36, teeing up Mallory Pugh, 21, to double the lead in the 76th minute. Lloyd, who nearly scored a goal minutes into the second half before being called back for offside, is going into her fourth Women's World Cup.

Tobin Heath shooting a scoring shot against Mexico during the first half of the match. (AP Photo / Julio Cortez)

In the 88th minute, Christen Press added her name to the score sheet with a kick from just outside the 18-yard box for this 48th career goal in a U.S. jersey.

The Sunday afternoon game – which featured the National Anthem played by 96-year-old World War II veteran Pete Dupre on the harmonica – capped by a whirlwind couple of days for the team in the New York City area.

Alex Morgan – who captained the first half of the game ahead of her third World Cup – duty reporters that now that the sendoff series has ended and with "distractions" behind them, they will be able to get to Europe and concentrate on their first game in the tournament.

"Now is just time to focus on the World Cup and what we do best, and that's play soccer at a really high level and have success doing it," she said. "We have been talking about how excited we are to get out of here – no offense to anyone – and we are ready to have that tightknit community within our team and just to build that chemistry."

Members of the United States women's national team gathering for fans during the send-off ceremony after the match. (AP Photo / Julio Cortez)

The American women's head to France this week for the month-long World Cup tournament. The defending champions seek to make the nearly impossible of back-to-back trophies and will face Thailand in their first game on June 11.

Their group stage games are set to continue on June 16 against Chile and then on June 20 against longtime rivals Sweden. All games can be watched live on Fox Sports