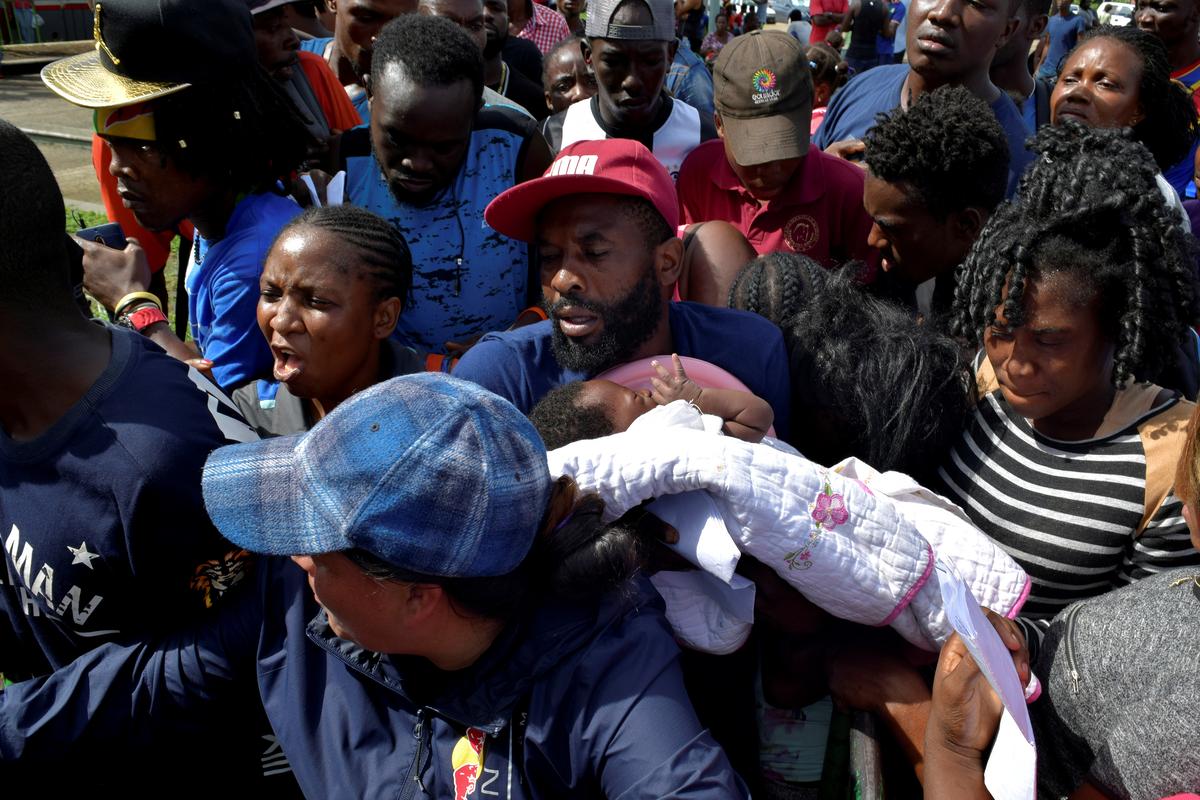 FILE PHOTO: A migrant from Cameroon holds his baby while trying to enter the Siglo XXI immigrant detention center to request humanitarian, issued by the Mexican government, to cross the country towards the United States, in Tapachula, Mexico June 27, 2019. REUTERS / Jose Torres / File Photo

She plans to take a bus north for four days and then cross a tenth border, into the United States. She is not alone – a record number of fellow Africans are flying to South America and then traversing thousands of miles of highway and a tropical rainforest to reach the United States.

Tatang, who has been pregnant for three months, took a raft over Mexico on June 8, a day after Mexico struck a deal with U.S. President Donald Trump to control the largest flows of migrants heading north to the U.S. border in more than a decade.

The migrants vying for entry at the U.S. Southern border are mainly Central Americans. But growing numbers from a handful of African countries are joining them, prompting calls from Trump and Mexico for other countries in Latin America to their part to slow the overall flood of migrants.

As more Africans learn about relatives and friends who have made the trip that crosses Latin America is tough but not impossible, more are making the journey, and in turn helping others follow in their footsteps, migration experts say .

Trumps threats to clamp down on migrants have ricocheted around the globe, paradoxically spurring to what they see as a narrowing window of opportunity, said Michelle Mittelstadt, communications director of the Migration Policy Institute, a Washington-based think tank.

"This message has been heard just in Central America, but in other parts of the world," she said.

Data from Mexico's interior ministry suggests that migration from Africa this year will break records.

The number of Africans registered by the Mexican authorities tripled in the first four months of 2019 compared with the same period a year ago, reaching about 1,900 people, mostly from the Cameroon and the Democratic Republic of the Congo (DRC), which remains deeply unstable years after the end of a bloody regional conflict with its neighbors that led to the deaths of millions of people.

"THEY WOULD HAVE KILLED ME"

Tatang, a grade school teacher, said she left northwest Cameroon due to worsening violence in the English-speaking region, where separatists are battling the mostly French-speaking government for autonomy.

"It was so bad that they burned the house where I was living … they would have killed me," she said, referring to government forces who tried to capture here.

At first, Tatang planned only to cross border into Nigeria. Then she heard that some people had made it to the United States.

"Someone would say," You can do this, "she said. "So I asked if it was possible for someone like me too, because I'm pregnant. They said, "Do this, do that."

Tatang begged her for money for the journey, which she said has cost $ 5,000.

She said her route started with a flight to Ecuador, where Cameroonians don’t need to be shown. Tatang goes by bus and on foot through Colombia, Panama, Costa Rica, Nicaragua, Honduras and Guatemala until reaching Mexico.

She was still deciding what to do once she got to Mexico's northern border city of Tijuana, she said, cradling her belly while seated on a concrete bench outside migration offices in the southern Mexican city of Tapachula.

Reuters spoke recently with five migrants in Tapachula who were from Cameroon, DRC and Angola. Several said they traveled to Brazil as a jumping off point.

They were a small sample of the hundreds of people – including Haitians, Cubans, Indians and Bangladeshis – clustered outside migration offices.

Political volatility in Cameroon and the DRC in recent years has displaced hundreds of thousands of people.

People from the DRC made up the third largest group of new refugees globally last year with about 123,000 people, according to the U.N. Refugee Agency, while Cameroon's internally displaced population grew by 447,000 people.

The number of undocumented African migrants found in Mexico quadrupled compared to five years ago, reaching nearly 3,000 people in 2018.

into the United States and ask for asylum.

Few choose to seek asylum in Mexico, in part because they don't speak Spanish. Tatang said the language barrier was especially frustrating because she speaks only English, making communication difficult both with Mexican migration officials and even other Africans, such as migrants from DRC who speak primarily French.

Those who reach the United States often send advice back home, helping make the journey easier for others, said Florence Kim, spokeswoman for the International Organization for Migration in West and Central Africa.

Like their Central American migrant counterparts, some Africans are also showing up with families hoping for more than individuals, said Mittelstadt of the Migration Policy Institute.

U.S. data shows a huge spike in the number of families from countries other than Mexico, El Salvador, Guatemala and Honduras at the U.S. southern border. Between last October and May 16,000 members of families were registered, up from 1,000 for the whole of 2018, according to an analysis by the MPI.

The grueling Latin America pull forces migrants to spend at least a week trudging across swampland and hiking through mountainous rainforests in the lawless Darien Gap that is the only link between Panama and Colombia.

Still, the route has a key advantage: Countries in the region typically do not deport migrants from other continents due to part of the steep costs and lack of repatriation agreements with their home countries.

That relaxed attitude could change, however.

During a deal struck with United States last month, Mexico may start a process later this month to become a safe third country, making asylum seekers apply for refuge in Mexico and not the United States.

To lessen the load on Mexico, Mexico and the United States plan to put pressure on Central American nations to do more to prevent asylum seekers, including African migrants, from moving north.

For the moment, however, more Africans can be expected to attempt the journey, said IOM’s Kim.

"They want to do something with their life. They feel lacking a future in their country, ”she said.