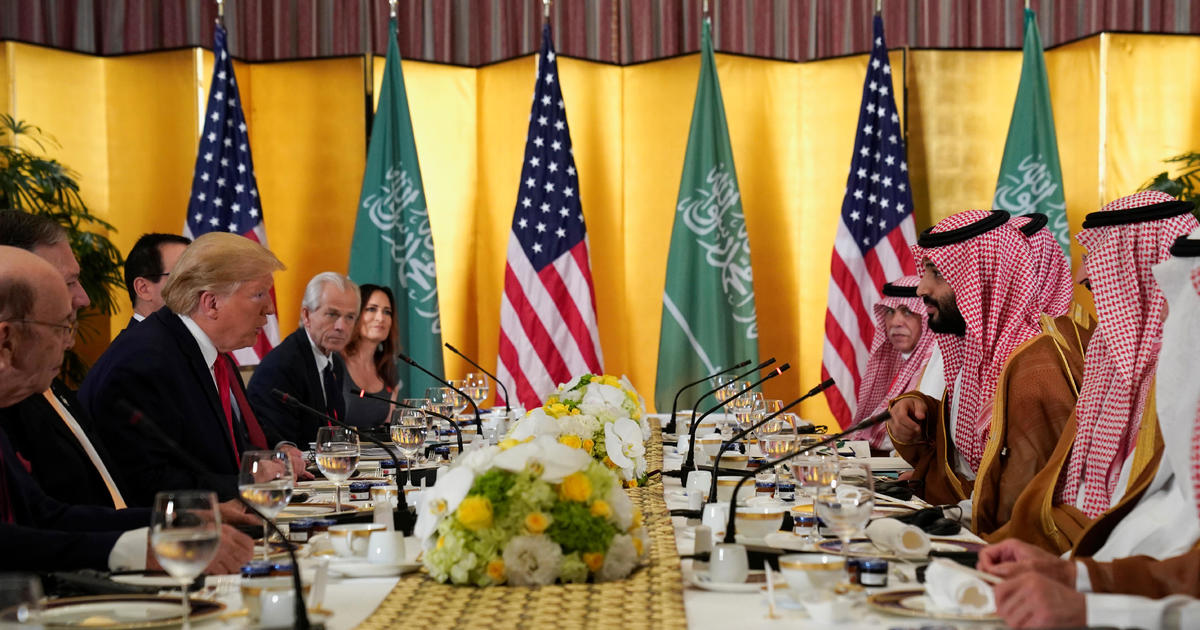 President Trump with with Saudi crown prince Mohammed bin Salman on Saturday while they were in Osaka, Japan, calling the crown prince a "friend of mine." Mr. Trump called bin Salman "a man who has really done things in the last 5 years in terms of opening of Saudi Arabia."

Mr. Trump did not answer questions about Saudi journalist Jamal Khashoggi who was murdered at the Saudi consulate in Istanbul in October 2018. An independent U.N. human rights expert investigating Khashoggi's death said earlier this month there is "credible evidence " linking bin Salman's to the murder. Bin Salman has denied any involvement.

Mr. Trump on Saturday praise bin Salman for doing a "speculator job" and said they've had meetings on "trade and economic development and on the military." "If you know, Saudi Arabia is a big purchaser of American products of American products and especially of America military equipment, "Mr. Trump said. "We make the best in the world by far. And we appreciate that they do. They create at least a million jobs created by the purchases made by Saudi Arabia, so we're very happy with you. Great honor. you all very much for being here. "

According to the White House, the pair had a "productive meeting" where they discussed "Saudi Arabia's critical role in ensuring stability in the Middle East and global oil markets, the growing threat from Iran, increased trade and investments between the two countries, and the importance of human rights issues. "

The meeting with bin Salman comes amid escalating tensions between the US and Iran. Mr. Trump has long praised bin Salman, and on Friday, forms Secretary of State Rex Tillerson said Mr. Trump's son-in-law and senior adviser "with often" with bin Salman.

Bin Salman stood between him and Japanese Prime Minister Shinzo Abe, leader of the host country, in a group photo.