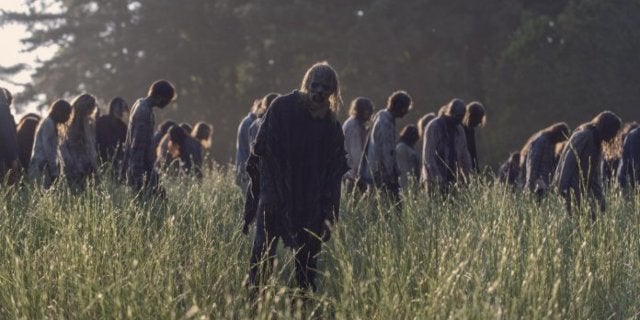 The future of the Walking Dead Universe could be mostly zombie-less, creator Robert Kirkman teased in the "Letter Hacks" column ending March's The Walking Dead # 186.

"That's probably generations away, but entirely feasible, sure, once all the muscle tissue and flesh holding those meat bags together fails," editor Sean Mackiewicz when asked for walkers will ever be too rotted to move or bite.

"There have been zombies seen in the series that are much less mobile. Lurkers were what we called them, "Kirkman added. “We've seen some extra decayed zombies along the way. The natural progression is that, yeah, eventually there will be very few zombies in this world because most of them will have died off and decayed … will the series last long enough for us to get there? Only time will tell !! " still-living population of Montana is just souls, declaring the factoid canon, the author admitted he may in the future be in details dropped in the letter column so as to avoid limiting upcoming stories. Kirkman explained

“In my opinion, at least. I never answer this in a letter column because if later I decide they are going to find a place with millions of people, you can say, "No wait! In the letters column for # 1

77 you said this! I also intentionally failed in the letters column from time to time to read eagle-eyed readers away from the upcoming plot threads. That's fun. At some point someone should take it upon themselves to read all the letter hacks over the years and see if they knew when I knew of an upcoming storyline and was clearly misleading people and when new idea. ”

Using a ratio supplied by Kirkman in issue # 10 of the comics – that the ratio of walkers to humans is 5,000 to one – SourceFedNERD 's Matt Lieberman in 2016 estimated just 0.0002% Of the world's population, or 1.4 million people, were still alive after the initial outbreak went global. Lieberman then number that diminished and fell below half a million in the first 600+ days of the outbreak, leaving less than 400,000 survivors across the globe.

Have you subscribed to ComicBook Nation, the official Podcast of ComicBook.com yet?

In this latest episode, we talk about Dragon Ball Super maybe returning, we're breaking down Kofi's trip to the set of Godzilla: King of the Monsters and more! Make sure to subscribe now and never miss an episode!