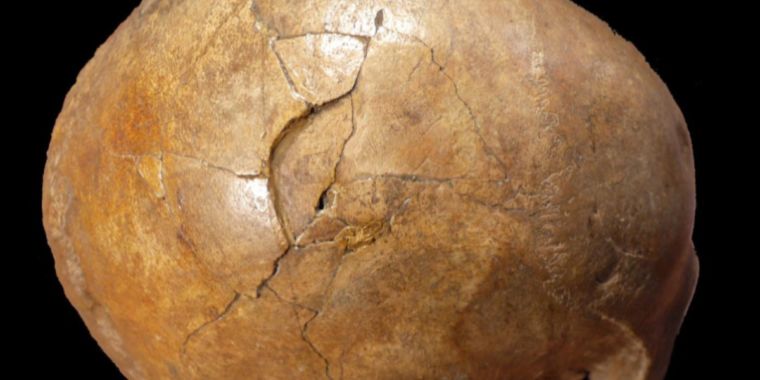 33,000 years ago, a man was violently lumped by a left-handed attacker with a club or similar object. It is the result of an international scientist who published the results of their forensic analysis in a recent paper in the PLOS ONE.

The so-called Cioclovina calvaria is a fossilized skull about 33,000 years old, discovered in a hole in southern Transylvania in 1941 during a mining operation. It makes it one of the earliest fossilized human remains yet known, so it has, of course, been studied extensively by scientists interested in learning more about the upper paleolithic period that started about 40,000 to 45,000 years and marking the great spread of modern people in Europe.

"The Cioclovina individual is particularly important as it is one of the earliest and relatively complete skulls of modern Europeans from the upper Paleolithic period," co-author Katerina Harvati of the Eberhard Karl University in Tubingen, Germany, told Live Science. "Human remains from this period are very rare and often very fragmentary."

Finally, it was decided to be a man's skull, and former scientists had noticed that there were two small healed scars on the frontal certificate for some kind of trauma that occurred sufficiently before death to allow the damaged area time to rebuild. (antemortem).

It is largely uncontested, but there was also a big break on the right parietal lobe. And scientists disagreed as to whether these were signs of blunt force trauma and possibly man's cause of death (a perimortic injury). Alternatively, the fracture could develop after death (postmortem). The fact that it is not described in the original 1942 publication describing the then newly discovered skull gives some support to the latter's point of view, but not enough to settle the debate once and for all.

So Havarti collaborated with two colleagues – Elena Kranioti from Crete University and Dan Grigorescu at the University of Bucharest – to conduct a more thorough forensic analysis. The team made CT scans on the skull, the better to study fracture patterns. They also simulated the head trauma with 12 synthetic bones, filled with ballistic gelatin to mimic the human brain. They dropped balls from different heights and managed single blows with a rock, a "bat-like object" and a baseball bat under various scenarios.

Well-established forensic techniques exist to determine whether this type of trauma was likely to occur anti-, peri- or post-mortem. Head trauma that shows signs of remodeling – the formation of calluses on longer legs, for example, or bone bridges formed in the skull – is a strong indication that the injury occurred antemortem, at least five to seven days before death. There will be no evidence of this conversion for peri or post mortem damage, as is the case with Cioclovina calvaria.

It is a bit tricky to distinguish between the latter two cases, and forensic analysts typically study the unique faction patterns to do so. For example, the fracture will propagate along paths with least resistance in a perimortic lesion, and its direction will form an acute or blunt angle. There may also be flakes of bones at the perimortic lesion site. A post mortem would not have any of these elements.

"[Our results] closely matched with the expected patterns of blunt power trauma."

The CT scans revealed at least two fractures without evidence of remodeling that showed the countersheets of perimortem damage. One was a linear fracture along the bottom of the skull and the other was the depressed fracture previously observed. Both fractures show the indicative signs of perimortem damage, according to the authors – probably the result of beating a bat-like object that is likely to be exercised by a left-handed attacker against his (or her) victim.

"Our results clearly showed that the fracture patterns observed on this skull could not have been produced after death or from an unfortunate fall," Harvati Live Science said. "Instead, they matched closely with the expected patterns of dumb ramps (ie, trauma inflicted on a blunt instrument, such as a club) to the head. The extent of the damage he sustained would have led to death. or why this came about, we can only speculate. "

It is also a sign that violence was a major part of this period of human history. "The upper paleolithic was a time of increasing cultural complexity and technological sophistication," the authors wrote. "Our work shows that violent interpersonal behavior and murder were also part of the behavioral repertoire of these early modern Europeans."