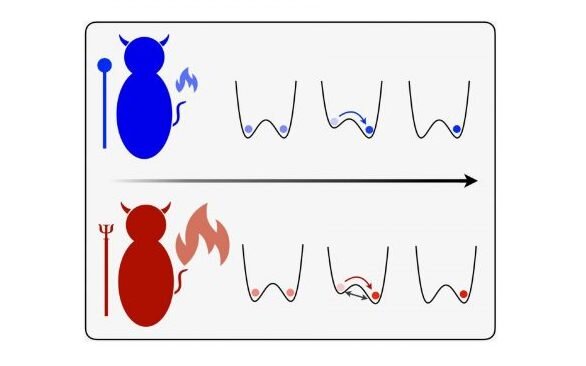 Researchers from Trinity have discovered a unique quantum effect when deleting information that can have significant consequences for the design of quantum computer chips. Their surprising discovery brings back the paradoxical “Maxwell̵

7;s demon”, which has plagued physicists for over 150 years.

The thermodynamics of computation were brought to the fore in 1961, when Rolf Landauer, then at IBM, discovered a relationship between heat dissipation and logically irreversible operations. Landauer is known for the mantra “Information is Physical”, which reminds us that information is not abstract and is coded on physical hardware.

“Bit” is the information currency (it can be either zero or one), and Landauer discovered that when a bit is deleted, a minimal amount of heat is released. This is known as Landauers bound and is the ultimate connection between information theory and thermodynamics.

Professor John Goold’s QuSys group at Trinity analyzes this topic with a view to quantum computation, where a quantum bit (a qubit that can be zero and one at the same time) is deleted.

In just published work in the journal Physical review letters, the group discovered that the quantum of the information to be deleted can lead to large deviations in the heat dissipation, which is not present in conventional bit erasure.

One hundred years before Landauer’s discovery, people like a Viennese scientist, Ludwig Boltzmann, and the Scottish physicist James Clerk Maxwell formulated the kinetic theory of gases, revived an ancient idea of ​​the ancient Greeks by thinking that matter was made of atoms and derived macroscopic thermodynamics from microscopic dynamics.

Professor Goold says: “Statistical mechanics tells us that things like pressure and temperature, and even the laws of thermodynamics itself, can be understood by the average behavior of the material atomic constituents. The second law of thermodynamics relates to something called entropy, as in a nutshell , is a measure of the perturbation of a process.The second law tells us that in the absence of external intervention, all processes in the universe tend to increase their entropy on average and reach a state known as thermal equilibrium.

“It tells us that when mixed, two gases at different temperatures will reach a new equilibrium state at the average temperature of the two. It is the ultimate law in the sense that any dynamic system is subject to it. There is no escape: all things will reach balance, including you. “

However, the basic fathers of statistical mechanics tried to pick holes in the second law right from the beginning of the kinetic theory. Consider again the example of a gas in equilibrium: Maxwell imagined a hypothetical “nicely fictitious” being with the ability to track and sort particles in a gas based on their velocity.

Maxwell’s demon, as the creature became known, could quickly open and close a trapdoor in a box with a gas and let hot particles get through to one side of the box, but limit cold to the other. This scenario seems to contradict the second law of thermodynamics, as the total entropy seems to be declining, and perhaps the most famous paradox of physics was born.

But what about Landauer’s discovery of the heat-derived cost of deleting information? It took another 20 years until it was fully appreciated, the paradox resolved, and Maxwell’s demon finally expelled.

Landauer’s work inspired Charlie Bennett – also at IBM – to explore the idea of ​​reversible computing. In a year 1982, Bennett argued that the demon must have a memory and that it is not the measurement but the erasure of the information in the demon’s memory that is the action that restores the second law in the paradox. And as a result, computational thermodynamics was born.

Now, 40 years later, this is where the new work led by Professor Goold’s group comes to light with thermodynamics for quantum computation.

In a recent article published with collaborator Harry Miller at the University of Manchester and two postdoc fellows in the QuSys Group in Trinity, Mark Mitchison and Giacomo Guarnieri, the team studied very closely an experimentally realistic deletion process that allows for quantum superposition (qubit). can be in the zero state and one at the same time).

Professor Goold explains: “In reality, computers work far away from Landauer’s bound to heat dissipation because they are not perfect systems. However, it is still important to think about it bound because as the miniaturization of computer components continues, this bond becomes ever closer, and it’s becoming more relevant to quantum computers.What’s amazing is that with technology these days one can really study deletion approaching that limit.

“We asked, ‘What difference does this clear quantum function make to the delete protocol?’ And the answer was something we did not expect, we found that even in an ideal deletion protocol – due to quantum superposition – you get very rare events that spread the heat far beyond the Landauer limit.

“In the paper, we mathematically prove that these events exist and are a unique quantum function. This is a very unusual finding that could be really important for heat management on future quantum chips – although there is a lot more work to do, especially in analyzing faster operations. and the thermodynamics of other street implementations.

“Even in 2020, Maxwell’s demon continues to ask fundamental questions about the laws of nature.”

Less is more for Maxwell’s demon in quantum heat engines

NASA is taking a sample of the asteroid Bennu, which is so large that some pieces escape

SpaceX aims to build a Starlink mega constellation around MARS