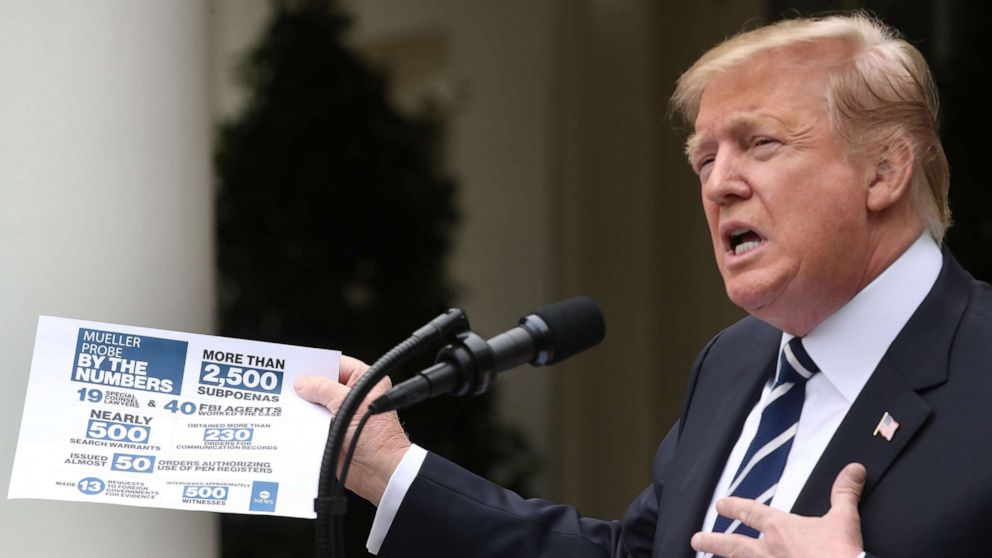 The TAKE with Rick Klein

Add The Note as an interest to stay up to date on the latest The Note news, video and analysis from ABC News .

This may go down as the most productive infrastructure week. Nothing got built, but something big got blown up.

By storming away from the negotiating table, President Donald Trump was trying to punish Democrats by ending talk of a major infrastructure package ̵

1; something they support, in principle.

But the president effectively implied his own policy agenda for the next year and a half. Infrastructure, immigration, trade deals, any chance to get out in front of health-care policy – it all disappears into the political morass.

Given the choice, Democrats would gladly choose investigating the president rather than working with an unpredictable partner they view as untrustworthy. Opportunities to work with Trump were, and with, potential traps for Democratic lawmakers.

The president may think he outmaneuvered House Speaker Nancy Pelosi, but she, again, got herself out of uncomfortable internal conversations and back to solid political ground for Democrats: opposing Trump.

The RUNDOWN with MaryAlice Parks

It was always going to be hard to get big bills signed into law with this divided government, which has felt particularly toxic and dysfunctional of late – even for Washington.

Still, part of Democrats' concern about leaning into investigations and oversight was that they would not be able to talk about their own ideas for policy and governing ahead of a presidential election.

Luckily for them, 23 people came to the rescue. The deluge of 2020 presidential primary candidates, all of whom seem to be willing to try to out-policy-proposition each other, which means that for now Democrats have some cover.

The candidates in the primary race bring a serious wonk factor, with new positions and action plans rolled out nearly every day. The level of detail and nuance is different than what's normally seen at this stage.

Maybe this is the "driving position" arms race, perhaps this particular candidate or demand from the voters, but if Pelosi and Senate Minority Leader Chuck Schumer do not have much time to talk about health care,

The TIP with Adam Kelsey

Every once in a while, there's a Capitol Hill vote important enough to pull presidential candidates of f the trail and throw their previously scheduled campaign plans for a loop. Such is the case Thursday for Sens. Kamala Harris and Cory Booker, Who Have Each Postponed Iowa Trips – Booker, by one day; Harris, entirely – in favor of remaining in Washington to vote on a long-standing disaster relief funding bill.

It's something of a catch-22 for senators who may want to keep up with their unemployed rivals, like Vice President Joe Biden and Shapes Rep. Beto O'Rourke, or the race's mayors and governors who set their own schedules, but feel that they can't abandon such closely watched legislation. And, in this case, it is an aid package that could directly impact on the record flooding and who caucus early in 2020.

Looking ahead, in an ironic twist, the congressional inactivity that may result from Wednesday's White House standoff between the president and democratic leadership could make it easier for Washington '2020 hopefuls to play hooky as they continue to pitch themselves for Trump's job.

ABC News "" Powerhouse Politics "podcast. Chief Chief Analyst Dan Abrams weighs on the potential fallout of House Democrats launching impeachment inquiries, saying it'd be "unprecedented" to use them as "fact-finding missions." He also speaks to ABC News Rick Klein and Senior Congressional Correspondent Mary Bruce about his new book, "Theodore Roosevelt for the Defense: The Courtroom Battle to Save His Legacy." https://apple.co/23r5y7w

WHAT YOU NEED TO KNOW TODAY