The Indian Muslim women ‘for sale’ in an app 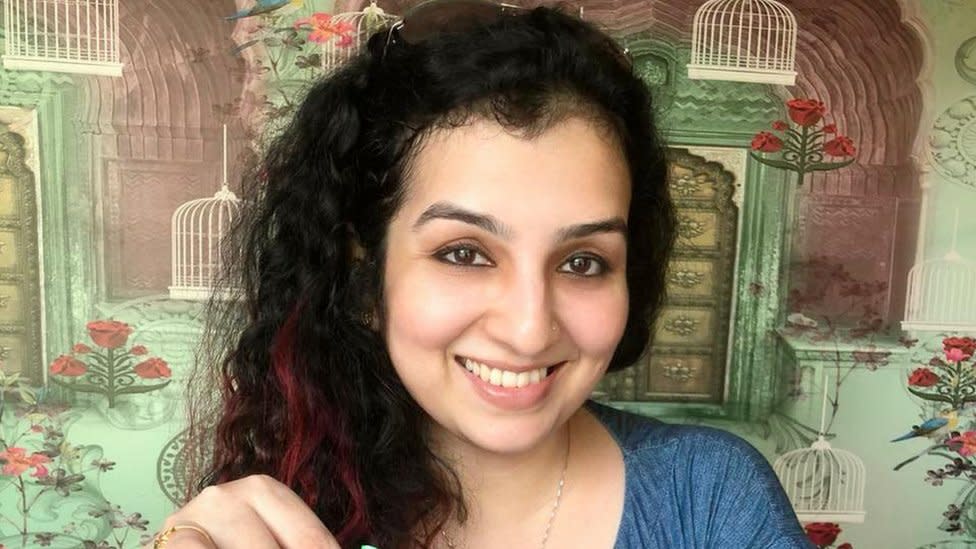 Last Sunday, dozens of Muslim women in India found that they had been put up for sale online.

Hana Khan, a commercial pilot whose name was on the list, told the BBC she was warned about it when a friend sent her a tweet.

The tweet led her to “Sulli Deals”, an app and website that had taken publicly available photos of women and created profiles describing the women as “today’s deals”.

The app’s landing page had a photo of an unknown woman. On the next two pages, Mrs. Khan saw photos of her friends. On the side after, she saw herself.

; she told the BBC. “They had taken my picture from Twitter and it had my username. This app ran for 20 days and we did not even know about it. It sent chills down my spine.”

The app pretended to offer users the chance to purchase a “Sulli” – a derogatory slang term used by right-wing Hindu trolls for Muslim women. There was no real auction of any kind – the purpose of the app was just to break down and humiliate.

Mrs Khan said she had been targeted because of her religion. “I am a Muslim woman who has been seen and heard,” she said. “And they will silence us.”

GitHub – the web platform that hosted the open source app – shut it down quickly after complaints. “We suspended user accounts following the investigation of reports of such activity, all of which are in violation of our policies,” the company said in a statement.

But the experience has left women scarred. Those in the app were all vocal Muslims, including journalists, activists, artists or researchers. A few have since deleted their social media accounts, and many others said they were afraid of further harassment.

“No matter how strong you are, but if your image and other personal information are published, it scares you, it disturbs you,” another woman told the BBC Hindi service.

But several of the women whose details were shared in the app have taken to social media to call the “perverts” and promised to fight. A dozen have formed a WhatsApp group to seek – and offer – support, and some of them, including Mrs Khan, have lodged complaints with the police.

Prominent citizens, activists and leaders have also spoken out against harassment. Police said they had launched an investigation but declined to say who could be behind the app.

This is not the first time, Mrs Amin, that Muslim women have been targeted in this way. On May 13, when Muslims celebrated the Eid festival, a YouTube channel conducted an “Eid Special” – a live “auction” of Muslim women from India and Pakistan.

Mrs. Amin told me that an anonymous account later in the day tried to “auction” her on Twitter. Several others – one called @ sullideals101, who has since been suspended – attended, “abused me, body shames me and describes gross sexual acts”, Ms Khan said.

She believes that those who tried to auction her off on Twitter are the same people behind the Sulli Deals app and the YouTube channel – which have since been taken down by the platform.

In the past week, Twitter has suspended accounts claiming they were behind the app and it would soon be backed up.

Last week, more than 200 prominent actors, musicians, journalists and officials from around the world wrote an open letter urging CEOs of Facebook, Google, TikTok and Twitter to make women’s safety “a priority”.

“The Internet is the city square of the 21st century,” they wrote. “This is where the debate takes place, communities are built, products are sold and reputations are created. But the scale of online abuse means that for many women, these digital urban spaces are insecure.”

A report by Amnesty International on online harassment in India last year showed that the more vocal a woman was, the more she was targeted. And just as black women were more likely to be elected in Britain and the United States, women from religious minorities and disadvantaged castes became more harassed in India.

Nazia Erum, author and former spokesman for Amnesty in India, said there were few Muslim women on social media and that those who were “hunted and haunted”.

“This targeted and planned attack is an attempt to remove the microphone from the educated Muslim women who express their opinion and speak out against Islamophobia. It is an attempt to silence them, shame them and remove the space they occupy,” she said. . said.

Ms Amin said the harassers had “no fear because they know they are getting away with it”.

She pointed to several recent cases of atrocities against Muslims encouraged by supporters of the ruling BJP party, such as a government minister who crowned eight Hindus convicted of lynching a Muslim and the country’s new TV minister who was seen last years in a viral video working up a Hindu crowd to “shoot Muslims”.

For those women whose identities were taken and used by the “Sulli Deals” app, the fight for justice could be long and fierce. But they are determined to have it.

“If the police do not find those who put us up for sale, I will go to court,” Ms Khan said. “I will pursue it until the end.”