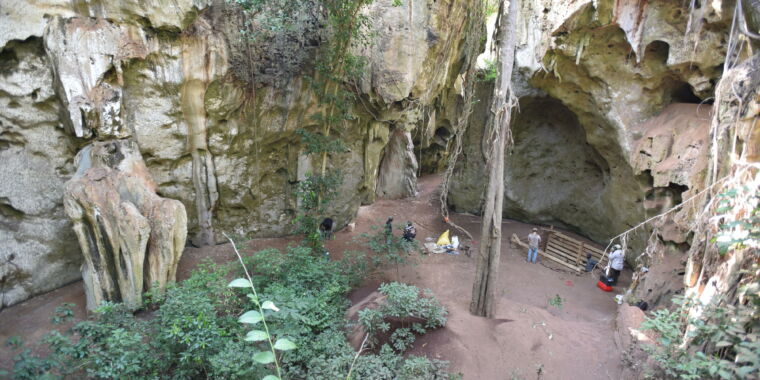 A child died two to three years of their lives in the coastal highlands of what is now Kenya 78,000 years ago. Archaeological evidence suggests that survivors packed the small body tightly before laying it, curled up on one side with the small head resting on a pillow, in a carefully dug hole in the Panga ya Saidi cave. The tomb of the child is now the oldest known example of people in the Middle Ages in Africa burying their dead.

A thesaurus is a practical thing, but sometimes seemingly small differences in meaning can actually have a huge impact. Consider the consequences of “disposing of bodies”

; versus “putting the dead to rest.” One of the things archaeologists are most interested in about the lives of the earliest members of our species – and our close relatives, now extinct – is when and how we first began to discern.

When did the early humans stop looking at a dead human body as something smelly that had to be removed from the living area before it attracted scarecrows and disease? When did they decide that it was necessary to treat them carefully to ensure safe passage to the afterlife – or perhaps provide peace for the living?

In short, the best way archaeologists can find out when people began to believe in concepts such as a spirit or an afterlife is to find out when people began to bury their dead with, as paleoanthropologist Louise Humphrey of the National History Museum of London puts it, “An investment of time and resources beyond what is strictly required to dispose of or make use of the body.” This can mean placing the body carefully in a certain position, wrapping it in a holster or supporting it with pillows or even burying objects in the grave.

Mtoto is what archaeologists named the skeleton of the 78,000-year-old child recently found in Panga ya Saidi Cave in Kenya (Mtoto is a Swahili word for child). And Mtoto clearly received that kind of tender attention from their community.

The remains were located by paleoanthropologist Maria Martinon-Torres, of Spain’s National Research Center on Human Evolution, and her colleagues. They found the small tomb dug into several older layers of sediment in the cave, with the pit filled with a mixture of sediment that was pushed up from the cave floor. Inside, there were only a few “fragile and broken” pieces of bone left: the base of the skull and part of the lower jaw, part of the spine and ribs, and some fragments of the arm and leg bones. The remains were so fragile that archaeologists had to wrap the entire burial ground in plaster and bring the plaster-wrapped piece of sediment back to a laboratory at the Museum of Kenya to excavate under better conditions.

Mtoto lay on his right side with his legs curled up to his chest. The baby’s right collarbone and upper ribs had been turned and pushed inward, just as archaeologists would expect if someone had wrapped the baby’s upper body tightly together, perhaps with a cloth or skin, before burial. Sometime after the funeral, the head and neck had collapsed downward, as if a support — perhaps a pillow or a block of wood — had fallen under it. And a few large shells mixed with that burial ground may (or may not) have been burial offerings.

When Martinon-Torres and her colleagues examined a pair of Mtoto’s teeth – a mixture of deciduous or baby, teeth and adult molars that had not yet come out of the jaw – they saw that the child was clearly a member of our species, homo sapiens. And optically stimulated luminescence, a dating technique that measures when rock or sediment last saw sunlight, placed the burial ground about 78,000 years old. This makes Mtoto the oldest human being with a formal, conscious grave in Africa.

Life and death in the Middle Ages

What does it actually tell us about the lives and beliefs of the ancient people or the gradual emergence of the first human cultures? The Middle Ages were a period when what archaeologists consider “modern human behavior” began to take the world by storm. It had been going on for about 200,000 years when Mtoto died, and it lasted for at least another 50,000 years. Modern human behavior in this case includes things like using symbols, creating art and making jewelry, and people in several places in Africa certainly did these things long before Mtoto’s people mourned their loss.

In Europe and the Levant, archaeologists have found evidence that humans – both homo sapiens and Neanderthals – buried their dead in or near their living quarters as early as 120,000 years ago. That is also what seems to have happened to Mtoto on Panga ya Saidi.

“Burial in living quarters, such as By Panga ya Saidi, has been proposed to reflect mourning behavior and the intention to keep the dead nearby, ”wrote Martinon-Torres and her colleagues. Of course, this is an informed guess; Archaeologists may not really know what ancient people thought. But it fits with what we know about similar choices in several modern cultures.

But all this – burials from 120,000 years ago in the Levant combined with signs of symbolic thinking and art much earlier than in Africa – makes it seem a little surprising that the earliest actual burial in Africa is only 78,000 years old. After all, burial seems to be such a key proof of ancient spiritual beliefs, and people had clearly laid the cultural foundation for these beliefs long before Mtoto’s time.

The key may be that “putting the dead to rest” does not always mean “digging a hole and filling it with dirt afterwards.” A quick look at modern cultures around the world reveals many different ideas about the right way to put the dead to rest, and each culture has its own reasons for what it does. Many of these burial methods are unlikely to leave archeological traces tens of thousands of years in the future.

Burial happens to be one of the methods most likely to leave behind, mostly intact for archaeologists to find, and it is also relatively easy to recognize a deliberate burial. But in tropical environments like coastal Kenya, buried bones do not always last for millennia; even what was left of Mtoto’s skeleton was, after all, in a “fragile and degraded” state. It is reasonably likely that for every funeral like Mtoto, there are others who have long since disappeared without a trace – life, death and afterlife forever without knowing.

“The absence of such conduct does not necessarily mean that the capacity for such conduct was lacking,” wrote Martinon-Torres and her colleagues.

There is more than one way to hide a body

People in Africa apparently lay their dead very consciously to rest, though in other ways, perhaps for hundreds of thousands of years before Mtoto’s funeral – and possibly before homo sapiens had technically come into being. Paleoanthropologists Lee Berger and John Hawks argue that mand Naledi led their dead through the narrow tunnels into the darkness of Rising Star Cave in South Africa about 300,000 years ago. Archaeologists are still debating this claim, but if Berger and the Hawks are right, Rising Star is an example of a burial cache – a place where people lay their dead without necessarily digging a hole to bury them in. Sima de los Huesos Cave in Spain may have served a similar purpose to other hominins there about 400,000 years ago.

The other two earliest human “burials” in Africa are a 68,000-year-old tomb in Taramsa, Egypt and a 58- to 74,000-year-old tomb in Border Cave, South Africa. But they are also technically funeral caches rather than funerals, according to the researchers. Regardless of technical conditions, people in both places clearly took the time and effort to put the remains to rest with care; the infant at Border Cave was even buried with a perforated shell, painted with ocher.

And that is the really disturbing thing that all three of Africa’s oldest human graves have in common: they all belong to small children. It suggests, Martinon-Torres and her colleagues wrote that “Homo sapienThe population deliberately preserved the bodies of young members of their groups between about 78,000 and 69,000 years ago. “In fact, if we look at all known homo sapiens or Neanderthal burial from 120,000 years ago to the end of the Pleistocene, just over half belong to children.

Children’s bones are smaller, more fragile, and less likely to survive millennia in the soil or depressions in a cave than adults. It might tell us something about old demographics; it could point to a higher percentage of children in the population, a higher infant mortality rate or probably a combination of both.