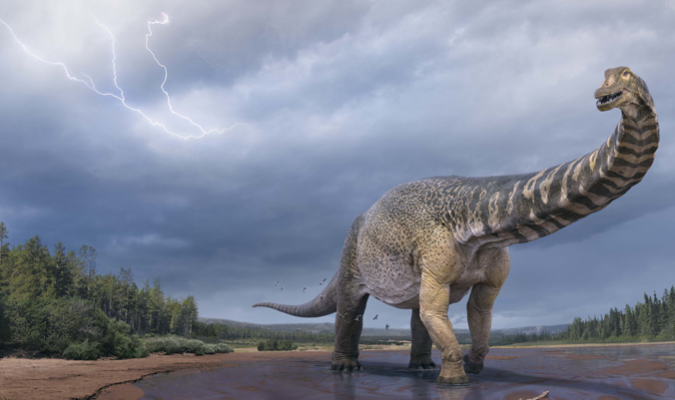 (Newser)
“This is an amazing animal. Imagine something the size of a basketball court walking around on land,” said Scott Hocknall, part of a team of paleontologists who confirmed the discovery of the largest dinosaur ever found. in Australia. Australotitan cooperensis was between 80 and 100 feet long and up to 21 feet high at the hip, researchers say. However, that makes it almost twice as big as T. Rex Australotitan, like other sauropods, ate plants, notes NPR. Its bones were first found in 2004 after 1

4-year-old Sandy Mackenzie discovered what he first thought was an unusual stone on his family’s Outback farm. The dinosaur was named after nearby Cooper Creek. Scientists used new 3D scanning technology to compare its bones with others in museums around the world and confirm that it is a new species.

Robyn Mackenzie, Sandy’s mother, is now a paleontologist. She says the new titanosaur is among the top five that even exist, and that it is the first Australian dinosaur to join the “elite group of dinosaur giants found so far mostly in South America,” Washington Post reports. When it lived about 95 million years ago, the part of Queensland where the fossil was found was part of Antarctica, meaning it is probably Antarctica’s largest dinosaur. Several finds in the region are still being investigated. The area “represents a sauropod path where dinosaurs walked along the trampling of mud and bone in the soft soil,” Hocknull said, according to the Queensland Museum. (Read more stories about dinosaurs.)