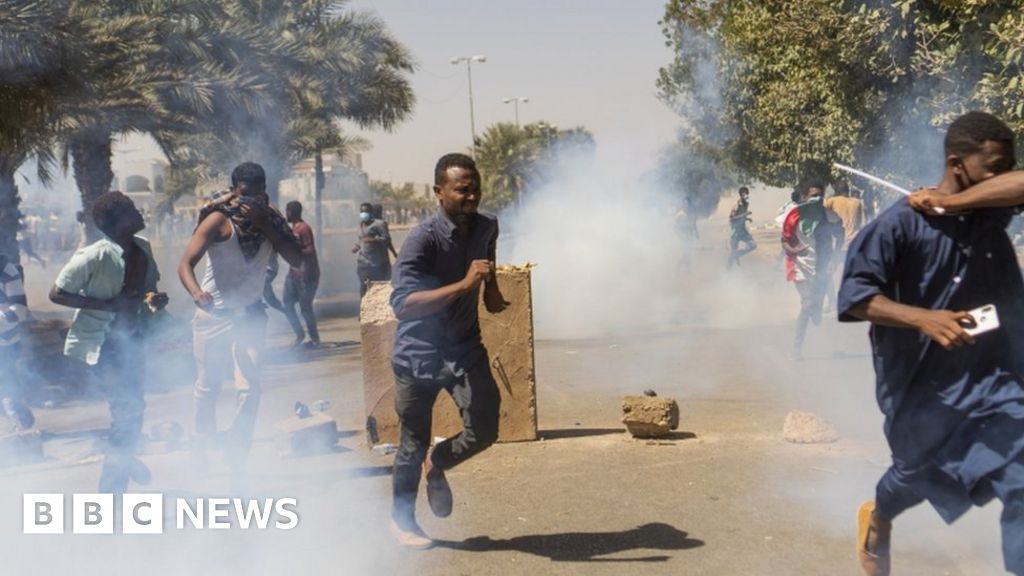 Second night of a sit-in protest calling for President Omar al-Bashir to resign.

Protesters sought shelter in a navy facility, as witnessed by tension among the armed forces was laid only.

One protester told the BBC's Newsday program that numbered pick-up trucks and started firing tear gas and live ammunition at the thousands of seats. -in protesters in the Sudanese capital

She said the military was at first neutral but then to chase the security forces away.

It is unclear who the security forces were but BBC Africa editor Fergal Keane says reports indicate they included age Nights from the National Security and Security Service (NISS).

The security forces returned for a second attack and people ran for a facility to seek shelter from the prolonged firing.

Ali Ibrahim, of the Sudanese Professionals Association (SPA), which has organized the protest, EFE news agency said that military units had been fired into the air to prevent security forces dispersing the sit-in.

of casualties from the scene. Video on social media protesters hiding behind walls as shots ran out

One resident of a district 5km (3 miles) away customs Reuters the tear gas could be felt there.

The sit-in is taking place outside the Army HQ and Agence France-Presses quotes as saying the army has now deployed troops around the building and is erecting barricades in streets near the compound. The army's intentions surrounding the protest remain unclear.

Information Minister Hassan Ismail said the protesters in front of the HQ had been "completely" and the security apparatus was "coherent and working with positive energy and in harmony". Armed divisions

The Sudanese state has numerous armed groups and there are signs of tensions between them.

The demonstrators accuse the NISS and the Rapid Support Forces (RSF) or attempting to drive them away from the protest. The RSF is a militia loyal to President Bashir which is made up of former members of the Janjaweed, the fighters accused or carrying out many atrocities in Darfur.

Over the past 48 hours, several protesters have the BBC that members of the Sudanese Armed Forces (SAF) have protected them from the NISS and RSF. However, many Sudanese still distrust the armed forces, because of their role in keeping President Bashir in power and their conduct in the country's succession of civil wars.

Some analysts believe that mid-ranking SAF officers are sympathetic to the protesters, with Most likely to be loyal to the president. But the position of all the armed groups is one of the key questions in Sudan today.

How did this protest begin?

It started on Friday when protesters descended on the zone outside the HQ to call for the removal of Mr Bashir and his government.

It was the biggest protest against the president since unrest began in December and marked the 34th anniversary of the coup that overthrew the regime or form President Jaafar Nimeiri.

The demonstrators appear to be hoping for an internal coup, pleading with the army command to remove Mr Bashir, who has been in power for nearly 30 years, and open the way for a transitional government.

The police say only one person has died in the latest protests – in Omdurman, Khartoum's twin city – but social media reports suggest that at least five protesters have been killed.

Why are people protesting?

The protests were originally kicked by a hike in the living but demonstrators are now calling for the president to go.

Sudan's economy has long been strained since the US imposed sanctions more than 20 years ago, accusing Khartoum of sponsoring terror groups.

In December, the government announced the price of fuel and bread would rise. In the year leading up to this, inflation had risen while the Sudanese pound fell rapidly in value.

Mr Bashir's rule has been blighted by accusations of human rights abuses. In 2009 and 2010, the International Criminal Court (ICC) charged him with counts of genocide, war crimes and crimes against humanity. A warrant for his arrest has been issued.

In February, it looked like he might give in protests and step down, but instead Mr Bashir declared a state of national emergency.

He says the protesters have legitimate grievances but should only replace him through elections. ] Who are the demonstrators?

The SPA – a collaboration of health workers and lawyers – has been organizing the protests.

Media playback is unsupported on your device

Media caption Sudan protests: "No amount of beating will make us stop "

Doctors have emerged as a leading force and as a result are targeted by the authorities.

It is estimated that two thirds of the protesters are women, who say they are demonstrating against Sudan's sexist and patriarchal society.

Have you recently taken part in the demonstrations? Get in touch by emailing haveyoursay@bbc.co.uk

Please include a contact number if you are willing to speak to a BBC journalist. You can also contact us at the following ways: