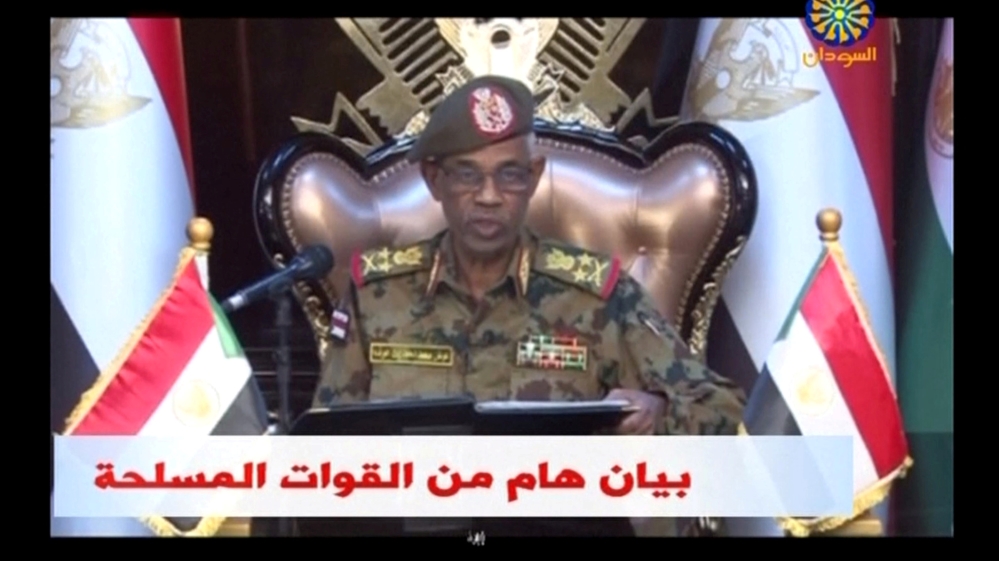 The following is in English translation of the Arabic statement delivered by General Awad Ibn Auf, Sudan's vice president and defense minister, on state media on Thursday:

Praise be to Allah Almighty. And peace be upon the Prophet Muhammad.

To the Sudanese people, peace be upon you all

The Supreme Security Committee, composed of the armed forces, the police, intelligence and security agencies, and the Rapid Support Forces, have been closely watching for a long time has been happening in the ruling institutions of the state, including mismanagement, corruption, injustice, and the lack of opportunities for the people, especially the youth. The poor have become poorer while the rich became more wealthy and even hope for equal opportunity for the children of one country was lost.

The people of this security apparatus have lived the same suffering as the poor people, in spite of the resources that our country enjoys. Despite all the suffering, unjust treatment and false promises, the Sudanese people have been patient, tolerant and generous. And in spite of the trouble that has struck the region and some other countries, our people have these phases with skill and wisdom that kept them safe from chaos, disintegration, and a descent into the unknown.

The youth of Sudan have taken to the streets in a peaceful protest, expressed by their slogans, from December 1

9, 2018, to the present day. The varied and repetitive crises of daily life and lack of essential services did not serve as a warning to the regime, which persisted in making misleading statements, repeating false promises and insisting on the security solution to the exclusion of all others.

Hence, the Supreme Security Committee finds it incumbent upon itself to apologize for the loss of life. Mercy be upon our martyrs and we wish a quick recovery to those injured, whether civilians or individuals from the security forces. All individuals affiliated with these forces took pains to deal with this crisis in a professional, efficiently less, in spite of some lapses.

Honorable people of our nation, you have followed, since April 6, 2019, what has been and still is occurring in the vicinity of and around the general command of the armed forces; and the signs of cracks in a venerable institution that the Supreme Security Committee has warned of, underlining the danger they posed.

The Committee repeatedly issued its warning and offered alternatives that it demanded, only to find itself against a stubborn insistence on the application of security solutions, in spite of a general conviction that such solutions would fail. Such solutions would be great for nobody to be able to foresee.

Therefore, the Supreme Security Committee, its armed forces, and its other members, has decided to execute what the head of the regime (President Omar al-Bashir) did not expect and has taken on the full responsibility of changing the regime for a transitional period of two years.

During this time, the armed forces will take on – with limited representation of the other elements of the committee – the responsibility of administering the state and preventing the prudent Sudanese blood.

thus, I, the minister of defense and head of the Supreme Security Committee, announce the removal of the regime, the arrest of its head (al-Bashir), and his detention in a safe location.

I also announce the following:

Firstly, the formation of a transitional military council to take over the administration of the nation's government for a transitional period of two

The suspension of the Transitional Constitution of the Republic of Sudan of 2005.

The declaration of a state of emergency for three months and a curfew for one month, from 10pm to 4am.

The closing or Sudanese airspace for 24 hours, as well as all ports of entry in Sudan until further notice.

The dissolution of the National Assembly and the Council of States

The dissolution of the state governments and their legislative bodies. The governors and security committees will be tasked to continue their duties.

All components of the judiciary, the constitutional court and general prosecution will function as normal.

Maintaining the day-to-day life of citizens, with no exclusion, revenge, aggression, or attacks on public or private property, and preserving dignity and honors. of public order, prohibition of any breakdown of order, and of the fight of crime in all its forms.

A ceasefire in all of Sudan.

The immediate release of all political prisoners. Peaceful transfer of power, the building of political parties and preparation for free and fair elections and a permanent constitution at the end of the transitional period.

Secondly, a commitment to all treaties, charters and conventions, local, regiona

The preservation of human rights and dignity

The preservation of human rights and dignity

The observation of good neighborly relations. 19659004] Working to maintain balanced international relations that bear in mind the higher interest of Sudan and non-interference in other countries' internal affairs.

Thirdly, the procedures. Securing military units, vital locations, bridges, and places of worship, securing and securing all the operations, communications, ports and air traffic, securing all services. [4] Fourthly, Honorable people of Sudan, we, the members of the Transitional Military Council – which will be formed in the second statement – if we undertake to bear this responsibility, nobody is able to preserve the safety of the citizens and the nation.

Strict security procedures, doing their part in the security and security of Sudan.