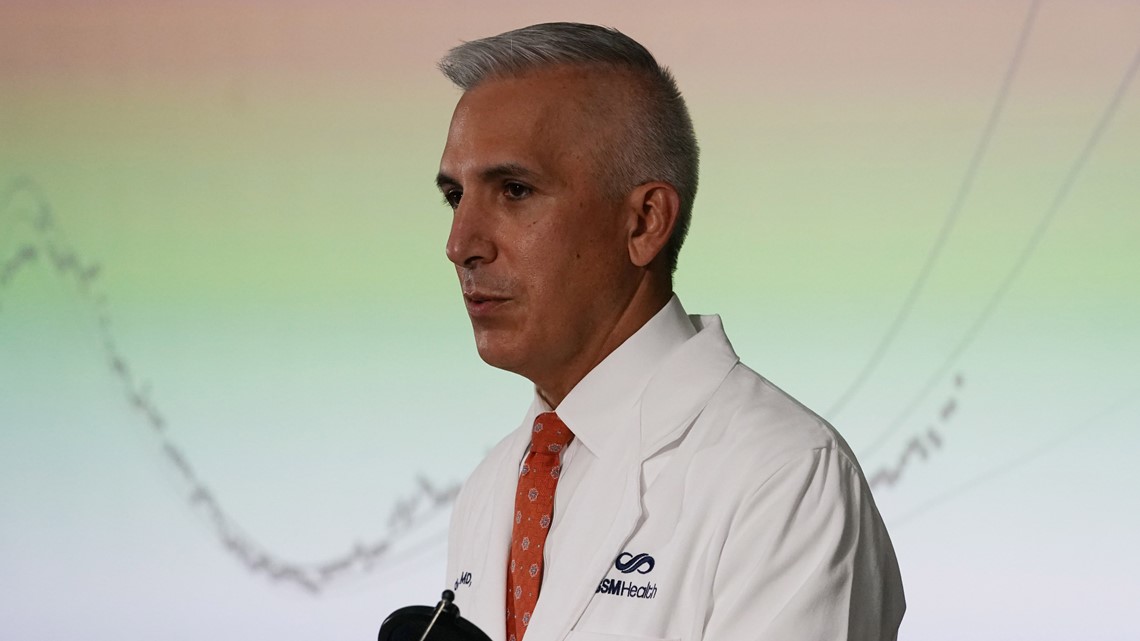 ST. LOUIS – St. The Louis Metropolitan Pandemic Task Force delivered its first briefing in nearly a month as the delta variant of the coronavirus takes hold in the southwestern part of the state.

Taskforce released a recorded briefing from Dr. Alex Garza Friday afternoon. You can see it in the player above.

“Today I am disappointed to tell you that we are once again losing ground due to the virus,”

On June 14, the task force held its last weekly briefing as hospital admissions approached their lowest point since the onset of the pandemic. In recent weeks, cases in the region and admissions have increased.

On June 9, there were 93 COVID-positive patients at St. Louis area hospitals. On Friday, the number more than doubled to 211. Dr. Garza said the number of hospitalized patients is increasing at a “rapid pace.”

“The virus is winning this round because the highly contagious delta variant of COVID has established a foothold and it is spreading rapidly,” said Dr. Garza.

Dr. Garza said the fact that the virus spreads quickly in the summer is even more worrying. He said the ability to be outside more often should help slow the spread, but the number is still rising.

He said the people now being infected are “almost exclusively unvaccinated.”

Dr. Garza said getting vaccinated is crucial to keep the delta variant in check and prevent another variant from developing.

“Every time the virus spreads from one person to another, it has the potential to mutate into something that is much harder for our vaccines to tackle,” he said. “Wearing a mask now will pay off later for all those who want companies to return to normal.”

Dr. Garza said admissions are increasing as a result of cases increasing in St. Garza. Louis area. According to data from the task force, cases have increased by 37.5% in the last two weeks compared to the previous two weeks. This is the highest increase since November last year.

The working group’s hospitalization data includes transfers from other hospitals, but Dr. Garza said it has not been a significant contributor to the increase.

About 15% of the cases currently in hospitals are outside St. Louis. Louis area, about the same percentage as other parts of the pandemic.

Going forward, Dr. predicted Garza that the pandemic will continue to worsen in the area.

“Because we are behind in vaccinations, and because we have this variant, we will most likely see a continued increase in cases and admissions,” he said. Remember, curves are spinning slowly in the pandemic, so we are dealing with patients who became infected two weeks ago. “

The following data are the combined figures from the four major health systems (BJC HealthCare, Mercy, SSM Health, St. Luke’s Hospital), which are part of the task force, on 9 July.

Going forward, the task force briefings will be led by Dr. Clay Dunagan, clinical director of BJC. Dr. Garza sends himself to Kuwait as a member of the Army Reserve, where he will serve as an emergency room doctor at a military base there.

“This is my last prayer, my last briefing when I take out of town,” said Dr. Garza. “So please, everyone who’s eligible, talk to your loved ones, talk to your healthcare providers, get the evidence, get the evidence that can be verified, and then go out and get vaccinated, that’s really the only way we want to be in able to emerge from this pandemic. “

Dr. Dunagan is leading its first briefing next Thursday.

Admissions in the southwestern part of the state are approaching the highest point in the pandemic, leading hospital leaders this week to renew prayers for people to be vaccinated in hopes of preventing a new wave.

RELATED: Mercy St. Louis is sending fans to Springfield while hospital admissions are increasing in Missouri

Steve Edwards, president and CEO of CoxHealth, tweeted Thursday that within a month, the delta variant could spread and hit other areas of the state just as hard as southwestern Missouri.

“People are begging to take the vaccine while there is still time,” Edwards tweeted. “If you could see the exhaustion in the eyes of our nurses who keep zipping body bags, we ask you.”

In about 4 weeks, the better part of our condition may be in a similar position as SW Mo. People begging to take the vaccine while there is still time. If you could see the exhaustion in the eyes of our nurses who keep zipping body bags, we ask you. https://t.co/20PLPkG135

On Friday, state epidemiologist Dr. George Turabelidze that the delta variant is spreading from mainly rural areas to larger populations, and health officials do not expect the wave to “turn around quickly” unless more people are vaccinated.

The state Department of Health this week issued a hot spot advice for three counties in the Lake Ozarks area: Camden, Miller and Morgan. The agency predicted that these areas could be the next to be hit hard by the delta variant due to spread from the southwestern Missouri region.

RELATED: Health Officials Fear Delta Delta May Increase in Other Parts of Missouri Within a Month