Slashing fossil fuel use could save millions of lives at risk due to air pollution, the study says. 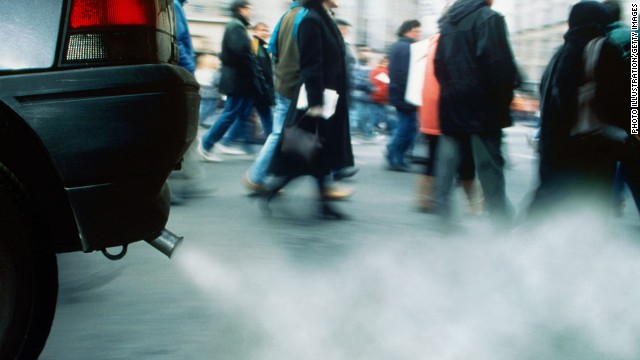 Worldwide kills 3.61 million people each year due to outdoor pollution caused by fossil fuels, an international team of scientists estimates. Fossil fuels, including coal, oil and natural gas, account for about 78% of global greenhouse gas emissions, according to the US Environmental Protection Agency (and about 76% of US greenhouse gas emissions).

An additional 1.94 million premature deaths occur due to air pollution from other sources, including household and agricultural activities, according to the authors.

In addition to the direct health benefits, rapidly falling fossil emissions will increase precipitation in droughts and increase food security, they say.

"The common goals of clean air and a stable climate under the World Health Organization guidelines and the Paris Agreement require a rapid phasing out of fossil fuels," wrote the authors of the study published Monday in the Proceedings of the National Academy of Sciences.

2015 The Paris Agreement aims to limit global warming in the 21st century to between 1.5 and 2 degrees Celsius (between 2.7 and 3.6 degrees Fahrenheit). A phase-out of fossil fuels is needed to prevent temperatures from rising beyond this internationally agreed target, according to the researchers for the study, while some researchers argue that removal of carbon dioxide from the atmosphere and the use of other geoengineering techniques may also be required.

For the new study, the researchers used a global model to assess climate and public health results that can be attributed to fossil fuel consumption.

Every year between 2.96 Millions and 4.21 million premature deaths occur due to air pollution caused by fossil fuels according to their analysis. In the United States alone, there are 194,000 annual deaths due to these causes, while China sees 1.6 million deaths and India 692,000 deaths.

"Globally, fossil fuel-related emissions account for about 65% of the excess mortality," the authors wrote. These emissions also account for almost 70% of climate cooling, they say.

Removal of fossil fuel emissions will increase "rainfall by 10-70% in densely populated areas of India and 10-30% across northern China and by 10-40% over Central America, West Africa and the drought problems of the Sahel," they wrote. (Sahel is a region of western and northern central Africa that includes Burkina Faso, Chad, Mali, Mauritania, Niger and Senegal. It has chronic food shortages caused by economic crisis, poverty, desertification and climate change since the beginning of The 1970s.) This significant increase in precipitation would result in greater water and food security, they say.

If air pollution and greenhouse gases are removed in the same way time will be a slight increase in "inevitable global warming", according to the authors. Their results indicate that it is very "unlikely" that the Paris Convention's temperature limit can be achieved without "massive extraction" of carbon dioxide from the air. "With a phase development at midcentury, however, the goal of 2 ° C can still be within reach."

Nick Obradovich, researcher at MIT's Media Lab, agrees with the "primary findings" of the new study that "fewer people will die if there are smaller particles in the atmosphere . "

This is not the first time we have heard this, but the study seeks to provide" more accurate estimates "to the front, Obradovich said, who was not involved in the research.

When preferably researchers create a mathematical model and come up with precise figures for what can happen, it is subject to approximations and estimates that may not be accurate, he noted. Scientists "bake in the model" any number of assumptions that we all want to use a similar amount indoors as we do now, and that most of us will not walk around with face masks. For this reason, he cannot say whether the numbers themselves are correct, but he agrees that "you will save people's lives if you reduce pollution."

Obradovich noted a "pretty big omission". The study's authors acknowledge that pulling particles from the atmosphere will increase short-term global warming. But they do not explain that an increase in average temperatures around the world will increase deaths, he said. This detail featured, he said, although it is very likely that more lives will be saved by reducing air pollution than life lost due to higher average temperatures.

What is a person to do? Even though the individual changes change – for example. Driving less – is the long-term political and technological change that will have the most lasting effect, said Obradovich: "I think the way to solve these problems is to get involved politically."