She was hosting, singing and painting a huge upside-down portrait. 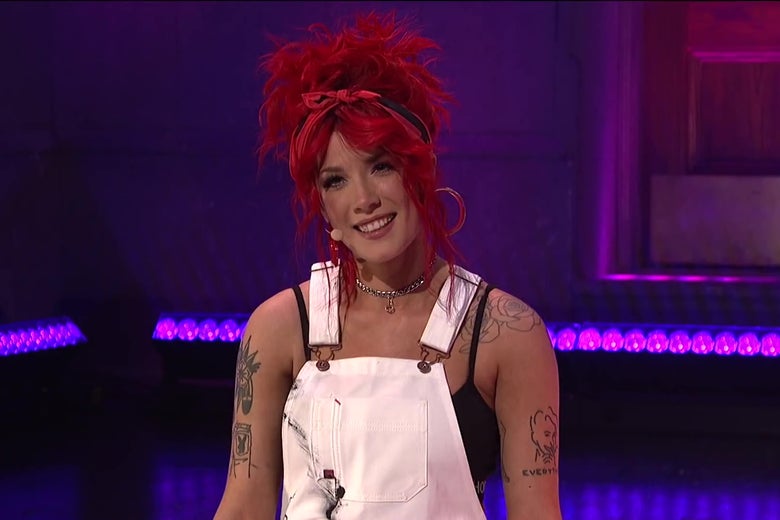 This week's Saturday Night Live hosted Halsey, who was also the musical guest. She is far from the first person to draw duplication: Paul Simon did it all back in 1975; Donald Glover did just last spring; And in 1978, when Elliot Gould did it as himself and exerted character as his musical alter ego, it was moody called "Mick Jagger" the stunt so successfully that he was forced to continue playing the character for decades. But Halsey beat new ground on Saturday night: First, she is probably the first person to use a SNL concert to call an ex to cheat on her. The singer, whose real name is Ashley Nicolette Frangipane, has said that "without me" was written about her again and again forever with G-Eazy. So the brutal Simpsons style light changes halfway through her stripped-down arrangement of the song and reveals that the walls of the set are covered with blunt excuses for cheating "in Minneapolis" "in Los Angeles," "more" Places I can't even remember – are not put on dressing, it's juicy celebrity.

Halsey is also not the first musical guest to drop a celebrity lad in the middle of a Saturday Night Live performance. It hasn't even been a year since Cardi B used his set to reveal she was pregnant. But in his second set, Halsey removed one thing no one has ever done on Saturday Night Live before, and no one will ever do it again: Paint an upside-down portrait, possibly by Halsey, while singing Halsey sang "Eastside." Check it out:

While Halsey's upside-down art skills are unimaginably impressive, she has also seen the bar quite high for next Saturday. Upcoming host Don Cheadle and musical guest Gary Clark Jr. now have less than a week to have high-profile celebrities and work up an all-singing, all-dancing, all-shooting salute to Chris Burden or anything. Halsey's decision to lean on the polymath case seems to be a bend point for Saturday Night Live. If we celebrate celebrities enough, at the end of the season, we will have Clint Eastwood sing "Mambo No. 5" while we care for Studio 8H on a bike. With crossed fingers.