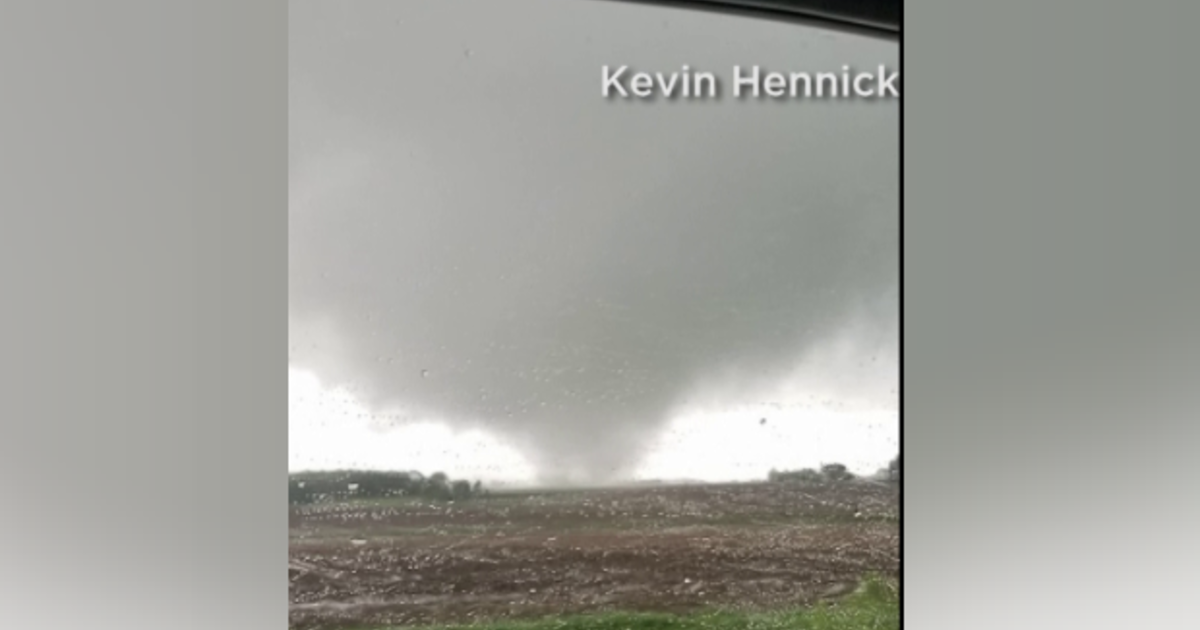 El Reno, Okla. – The central U.S. is stuck in a cycle of dangerous storms that won't stop anytime soon. Tornadoes struck again Monday in Iowa, Illinois and Indiana – and more may fire up later.

In the past week, at least 15 people have been killed by tornadoes and flooding.

Rivers are rising to record levels, threatening homes and businesses in Arkansas, Oklahoma, Kansas and Missouri.

More severe weather slammed the Midwest on Monday afternoon in Illinois, where heavy rain and hail hammered the town of Yorkville.

A tornado touched down in Iowa.

Over the past few weeks, spring storms have soaked the nation's midsection. Drone video shows the scope of the historic flooding along the Arkansas River near Fort Smith, neighborhoods and cars submerged.

The worst is yet to come.

The river is expected to crest Wednesday – a historic 20 feet above flood stage. Residents are just about keeping the water out. Barling Police Officer James Breeden said they are keeping an eye on the livelihood.

Donna and Jerry Morgan spent Memorial Day delivering sandbags to people bracing for the rising water. [19659003] "It's dire. Dire. I mean these people are suffering, "Donna said." They're losing everything, they're losing their homes. " Oklahoma, where it killed two people and injured more than 25 others

On Monday, Oklahoma Gov. Kevin Stitt got a call from President Trump while he surveyed the damage.

It's just unbelievable that a tornado can do this type of damage, "Stitt said. "It doesn't matter when you watch it on TV … it just unbelievable anybody could survive." Tornado and storm threats continue across central US

While the cleanup continues, there are more storms in the Forecast

There's a threat Sunday night from Indiana to Nebraska. On Wednesday, the severe weather threat extends south of Dallas. The heat wave in the Southeast is expected to continue on Wednesday.