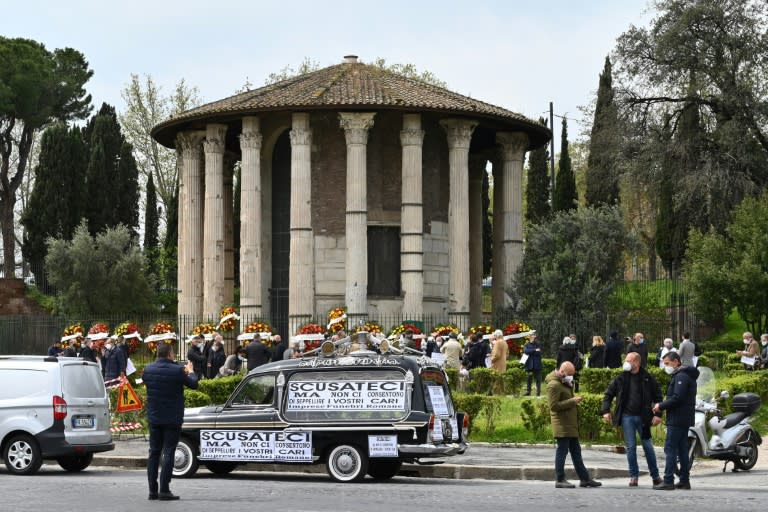 Funeral home operators staged a protest in Rome on Friday over a desperate situation that they say has left nearly 2,000 coffins in the Italian capital, waiting weeks or even months to be cremated.

While coronavirus has not helped the situation, the increase in deaths and limited access to public services caused by the pandemic have only revealed a long-standing problem caused by Italy’s old nemesis bureaucracy.

“We appeal to the Mayor of Rome to complete the current procedures necessary to approve a cremation,” Giovanni Caccioli, national secretary of the Italian Funeral Home, told AFP during the protest.

Standing next to their hearses, funeral workers laid wreaths around the Roman temple of Hercules Victor, near Mayor Virginia Raggi̵

7;s office, with messages that read, “Sorry, they will not let us bury your loved ones.”

According to Caccioli, Rome registers about 15-18,000 requests for cremations each year, for which families must undergo a “tortuous” bureaucratic journey involving the local cemetery, the AMA municipal agency, and the registrar’s office.

Earlier this week, a bereaved son, Oberdan Zuccaroli, staged a very personal protest by placing billboards around Rome with the message: “Mother, sorry, I have not been able to get you buried yet.”

But he is far from the only one for whom the delays have exacerbated the pain of losing a loved one.

“It’s been three months that I’ve been waiting for my husband’s cremation and nothing has happened yet,” said Lorella Pesaresi, whose husband died in January after testing positive for coronavirus while undergoing chemotherapy.

“It’s not fair – coronavirus and now this,” she told AFP.

Caccioli said the paperwork to obtain a cremation permit was still being done by hand, and the process took an average of 35 to 40 days in Rome, “an absurd situation”.

He noted that other cities did so in one or two days, adding, “We can not continue like this.”

Maurizio Tersini, who runs the funeral home Le Sphinx, says about 1,800 coffins are waiting to be cremated in Rome.

“The main problem is a bureaucratic problem,” the 59-year-old told AFP, adding: “It’s a big suffering for the families.”

However, this is not a new problem.

The Cgil union warned in September that hundreds of coffins had risen in Rome’s Prima Porta-Flaminio cemetery after one of the city’s two other main cemeteries, Laurentino, ran out of space for burial.

“They did not do what was decided in 2017, namely to build four new crematoria and expand Laurentino,” the head of Cgil in Rome, Natale Di Cola, told AFP on Friday.

The situation has been exacerbated by the pandemic, which according to the official toll has claimed more than 116,000 lives in Italy – although Rome has not been hit as hard as other regions.

“What was a crisis became chaos,” Di Cola said.

The AMA, the town hall agency that manages cemeteries, said in a statement earlier this week that the situation was under control and that efforts were continuing to free up burial sites.

It added that it had been confronted with a 30 percent increase in deaths from year to year in the period from October 2020 to March 2021.