Review: ‘The White Lotus’ offers landscape from the class struggle 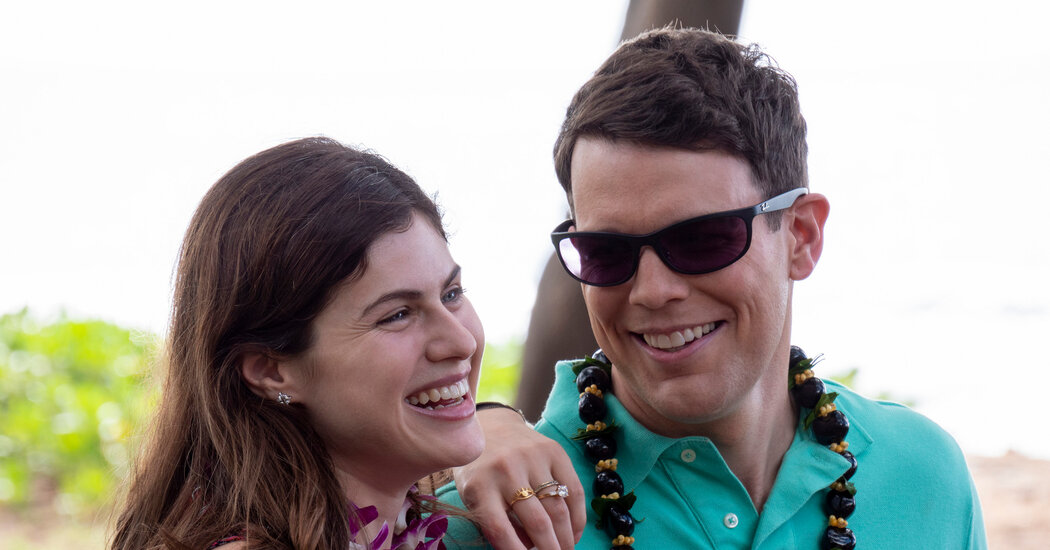 What do people expect from their holiday? Rest? Of course. Funny? Absolutely. But also miracles.

They want one week out of the year to somehow correct the other 51; to make them fall in love or back in love; to strengthen broken family ties to provide closure to create death memorials to summon magic, serendipitously yet on request.

Our expectations are unrealistic in the most humble of circumstances. Add an affordable destination and a group of privileged guests who are adept at undermining their own happiness and you have a formula for disaster or at least a highly worded complaint to the manager.

This is the set-up for the captivating, sun-and-acid-soaked “The White Lotus,” which begins Sunday on HBO, where a week-long escape at an elite resort in Hawaii turns into three different parties and the staff serving them to a multi-front war in the Pacific.

The six-episode soap opera, written and directed by Mike White (HBO’s “Enlightened”), begins as “The Love Boat” and “Fantasy Island” did in gentler TV times with a vanguard of staff greeting on a round of VIPs here, however, the staff are neither effortlessly cheerful nor supernaturally powerful. They are workers, physical and emotional, whose job is to anticipate needs, always be present and yet never be felt.

As resort manager Armond (Murray Bartlett) explains to an intern: “You do not want to be too specific, as a presence, as an identity. You want to be more generic. ”

Through the urban, meticulous Armond, we see the invisible gymnastics that goes into this job. Every greeting from a guest involves a lot of micro-assessments: who needs security, who needs a drink. It’s high pressure work (Armond is actually an addicted addict), done behind a mask of calm namaste.

This is not going to be a perfect week. We learn in an in-media-res opening that someone is going to die, a mystery that gives “The White Lotus” a gentle plot push. But the real driving force of the series is money. Even the sunlight feels like money here; White bathing scenes in so much golden glow you would think the hotel has exclusive access to a private, first-class sun.

And money defines the character relationships, not only between the guests and the staff, but among the guests. There’s the Mossbacher family: Nicole (Connie Britton), a senior executive; her husband, Mark (Steve Zahn), who seems to feel impressed by her success (he has a health scare that literally involves his testicles); their son, Quinn (Fred Hechinger), alienated and lived inside his phone; and their cool scary daughter, Olivia (Sydney Sweeney), whose sidekick Paula (Brittany O’Grady) is bound by the unwritten rule that she must never have anything that Olivia does not have.

Also by the pool are the newlyweds Shane (Jake Lacy) and Rachel (Alexandra Daddario) on a honeymoon that his wealthy family paid for. While she wonders if she has been rushed into a marriage where she is a second-class citizen, he becomes obsessed with the suspicion that Armond has put them in a premium suite that is a little less premium than the one they booked.

Shane is a disgrace to it, but he’s not mistaken, and the escalating, passive-aggressive battle between him and Armond becomes the talking heart of “The White Lotus.” Armond’s usual blandishments do not match the relentless lacrosse stick of Shane’s dish. Lacy, who has often played boring nice guys, is very magnificent, and Bartlett plays manager as a coiled source who spends the week disastrously winding down.

Their conflict is not about a space or the coveted basin that Shane has been denied, or even finally the money. Shane knows he has the power in this dynamic, and his insistence on getting his pound of sashimi-grade meat becomes a sadistic quest. (Our society lacks a male equivalent for a “Karen”, shorthand for the privileged white antagonist who would like to talk to your supervisor, but after this series it might just be a “Shane.”)

These Eden-themed snakes are familiar to White. In her two-season masterpiece “Enlightened”, Amy Jellicoe (Laura Dern) undergoes a wobbly journey from nervous wreck to social justice crusader after a rehabilitation time in Hawaii, where she has a revelation while swimming with sea turtles – a picture that “The White Lotus “repeats itself. (Another possible prominent credit was White’s time as a participant in “Survivor: David vs. Goliath”, where underdogs and overdogs competed on a tropical island.)

White’s signature tone is sardonic and sincere at the same time. He has an ear for how people can arm idealism; he understands how the language of self-care and self-help can pussy ordinary self-interest. The downside of this is that he is a generous enough writer to find the vulnerability in even his most grating characters.

You can see this in Tanya (Jennifer Coolidge) stepping out of the VIP boat in a depressing fog with a plan to scatter her dead mother’s ashes at the resort. She could easily tip into a dizzying lady caricature, but instead she has a damaged authenticity and glimpse of self-awareness. You feel for her – yet this does not excuse the emotional vampire bond she develops with spa manager Belinda (Natasha Rothwell), another one-sided relationship dominated by the person paying the room charges.

“The White Lotus” could spend more attention on the lower half of its upstairs-downstairs story; it looks at, but does not really explore, the lives of the native Hawaiian staff who bust tables and perform dinner rituals. And it sometimes strives to be current, with its culture-war Mad Libs references to triggering and cucking, canceling and doxxing.

But this is a sharp, soulful series that knows its characters fully and gets richer as it continues. It’s vicious and a little sudsy and then out of nowhere, insidiously uplifting. Along with its class-conscious bite, it has a sincere sense of beauty and awe. We all work and play and live and die under the same sun, says “The White Lotus”. Some of us just manage to get in more sunbathing than others.