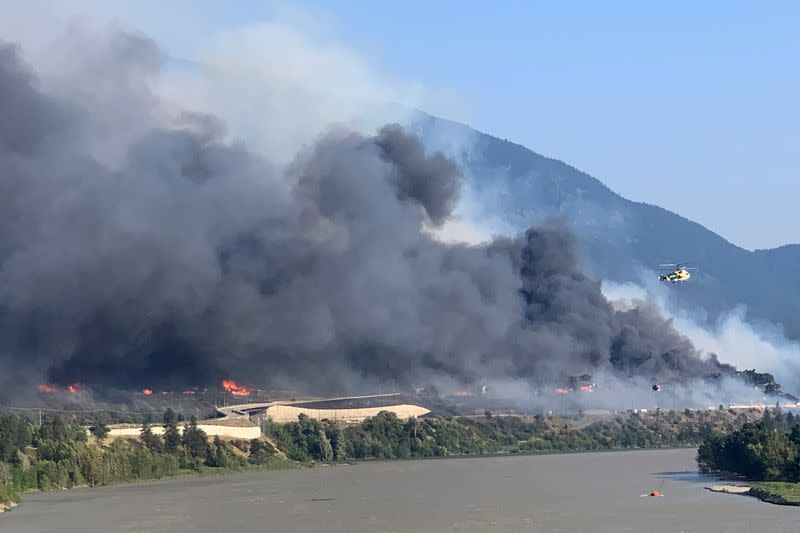 LYTTON, British Columbia (Reuters) – Residents of Lytton, British Columbia, could see the remains of their homes Friday for the first time since they were forced to flee for their lives days ago.

The central city of British Columbia made headlines in late June for breaking Canada’s heat record – hitting 49.6 ° C (121.28 ° F) at its hottest – and was then almost completely destroyed in a forest fire that was partially caused by the heat wave.

The town of about 250 people had a few minutes to evacuate on June 30, along with about 2,000 people living in nearby indigenous communities after a forest fire was started by what authorities suspect human activity.

“A few buildings survived in the city, but almost every home in the center of the village is gone. Where many buildings stood is now simply charred land,”

; Polderman wrote in an open letter published in the Merritt Herald, the local newspaper. “We want everyone to know that their bravery was incredible in the face of this unimaginable horror.”

Residents had not been able to return to the city until Friday due to ongoing fires and toxic substances in the area. About 250 people – including residents and the media – were taken on bus tours of the city on Friday afternoon, according to the Thompson-Nicola Regional District, which organized tours.

“Didn’t get much sleep last night when I thought about the bus ride to Lytton today,” resident Edith Loring-Kuhanga posted on Twitter. “I know it’s going to be heartbreaking, but I have to see our little town, even if it’s decimated!”

The scenes were a shock to residents, one told the Canadian Broadcasting Corporation.

“We’ve seen the videos, but until you actually see it, it’s hard to believe,” Chloe Ross said. “I understand why others do not want to go. Nothing about this feels right.”

Two people died in the fire. The Royal Canadian Mounted Police, which has coordinated efforts for family reunification, said on Friday that so far no one has been reported missing.

(Reporting by Moira Warburton in Vancouver and Jennifer Gauthier in Lytton; editing by Sandra Maler)