Researchers solve mystery of how gas bubbles form in liquid 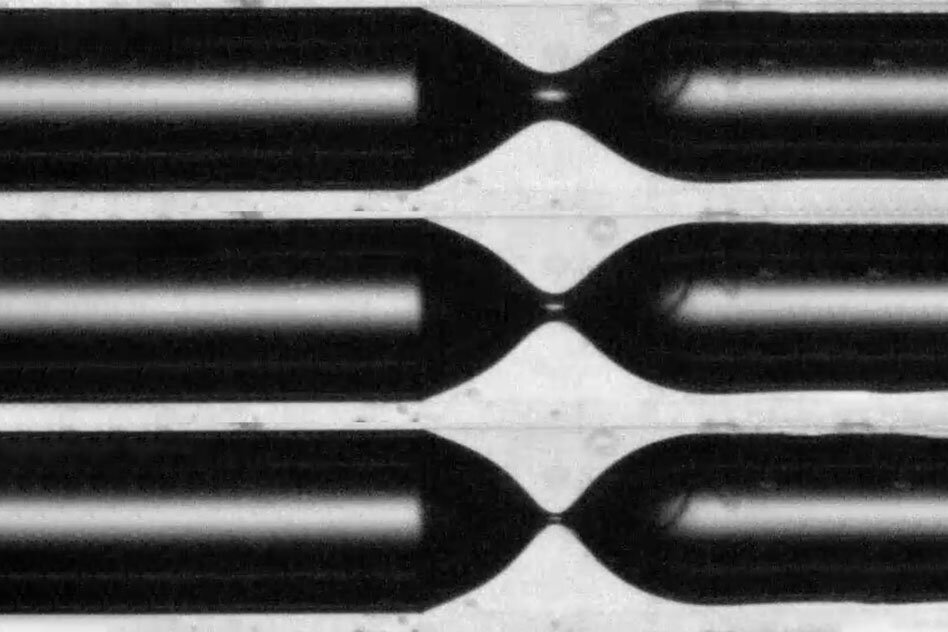 The formation of air bubbles in liquid appears very similar to its inverse process, the formation of liquid droplets from, say, a dripping water faucet. But the physics involved is actually quite different, and while those water droplets are uniform in their size and spacing, bubble formation is typically a much more random process.

Now, a study by researchers at MIT and Princeton University shows that under certain conditions, bubbles can also be coaxed to form spheres as perfectly matched as droplets

The new findings could have implications for the development of microfluidic devices for biomedical research and for understanding the way natural gas interacts with petroleum in the tiny pore spaces of underground rock formations, the researchers say. The findings are published today in the journal PNAS in a paper by MIT graduate Amir Pahlavan Ph.D. 1

The key to producing uniformly sized and spaced bubbles lies in confining them to a narrow space, Juanes explains. When air or gas is released into a large container of liquid, the dispersal or bubbles is scattershot. When released into liquid that is confined to a relatively narrow tube, however, the gas will produce a stream of bubbles perfectly matched in size, and forming at even intervals. This uniform and predictable behavior, independent of specific starting conditions, is known as universality.

The process of formation of droplets or bubbles is very similar, beginning with an elongation of the flowing material (whether it is air or water), and eventually a thinning and pinch-off of the "neck" connecting the droplet or bubble to the flowing material. That pinch-off then allows the droplet or bubble to collapse into a spherical shape. Picture blowing soap bubbles: As you blow through the ring, a tube of soap film gradually extends outward in a long pouch before pinching off to form a round bubble that floats away.

"The process of a droplet dripping from a faucet is known to be universal, "says Juanes, who has a joint appointment in the departments of civil and environmental engineering and earth, Atmospheric and Planetary Sciences. If the dripping liquid has a different viscosity or surface tension, or if the opening of the faucet is a different size, "it doesn't matter. You can find relationships that allow you to determine a master curve or a master behavior for describing that process, "he says.

But when it comes to what is, in a sense, the opposite process to a dripping faucet – the injection of air through and opening into a large tank of liquid such as a jacuzzi tub – the process is not universal. "If you have irregularities in the orifice, or if the orifice is larger or smaller, or if you inject with some pulsation, all of that will lead to a different pinch-off of the bubbles," Juanes says.

The new experiments involved gas percolating onto viscous liquids such as oil. In an unconfined space, the sizes of the bubbles are unpredictable, but the situation changes when they bubble into liquid in a tube instead. Up to a certain point, the size and shape of the tube does not matter, nor the characteristics of the gas comes through. Instead of the bubbles, like the droplets from a faucet, are uniformly sized and spaced.

Pahlavan says, "Our work is really a speech of two surprising observations; the first surprising observation came about 15 years ago, when another group investigating formation of bubbles in large liquid tanks observed at the pinch-off process is nonuniversal "and depends on the details of the experimental setup. "The second surprise now comes in our work, which shows that the bubble inside a capillary tube makes the pinch-off insensitive to the details of the experiment and therefore universal." This observation is "surprising," he says, because intuitively it might seem that bubbles were able to move freely through the liquid would be less affected by their initial conditions than those in hemmed in. But the opposite turned out to be true. It turns out to be interactions between the tube and the forming bubble, as a line of contact between the air and the liquid advances along the inside of the tube, play and important role. This "effectively erases the memory of the system, of the details of the initial conditions, and therefore restores the universality to the pinch-off of a bubble," he says.

While such research may seem esoteric, its findings have potential Applications in a variety of practical settings, Pahlavan says. "Controlled generation of drops and bubbles is very desirable in microfluidics, with many applications in mind. A few examples are inkjet printing, medical imaging and making particulate materials." The new understanding is also important for some natural processes. "In geophysical applications, we often see fluid flows in very tight and confined spaces," he says. These interactions between the fluids and the surrounding grains are often neglected in analyzing such processes. But the behavior of such geological systems is often determined by processes at the grain-scale, which means that the child of microscale analysis done in this work could be helpful in understanding even such large-scale situations.

The bubble formation in Such geological formations can be a blessing or a curse, depending on the context, Juanes says, but either way it's important to understand. For carbon sequestration, for example, the hope is to pump carbon dioxide, separated from power plant emissions, into deep formations to prevent the gas from getting into the atmosphere. In this case, the formation of bubbles in tiny spaces in the rock is an advantage, because the bubbles tend to block the flow and keep the gas anchored in position, preventing it from leaking back out.

But for the same reason , bubble formation in a natural gas well can be a problem, because it can also block the flow, inhibiting the ability to extract the desired natural gas. "It can be immobilized in the pore space," he says. "It would take much greater pressure to be able to move that bubble."

A way to create liquid droplets inside of air bubbles