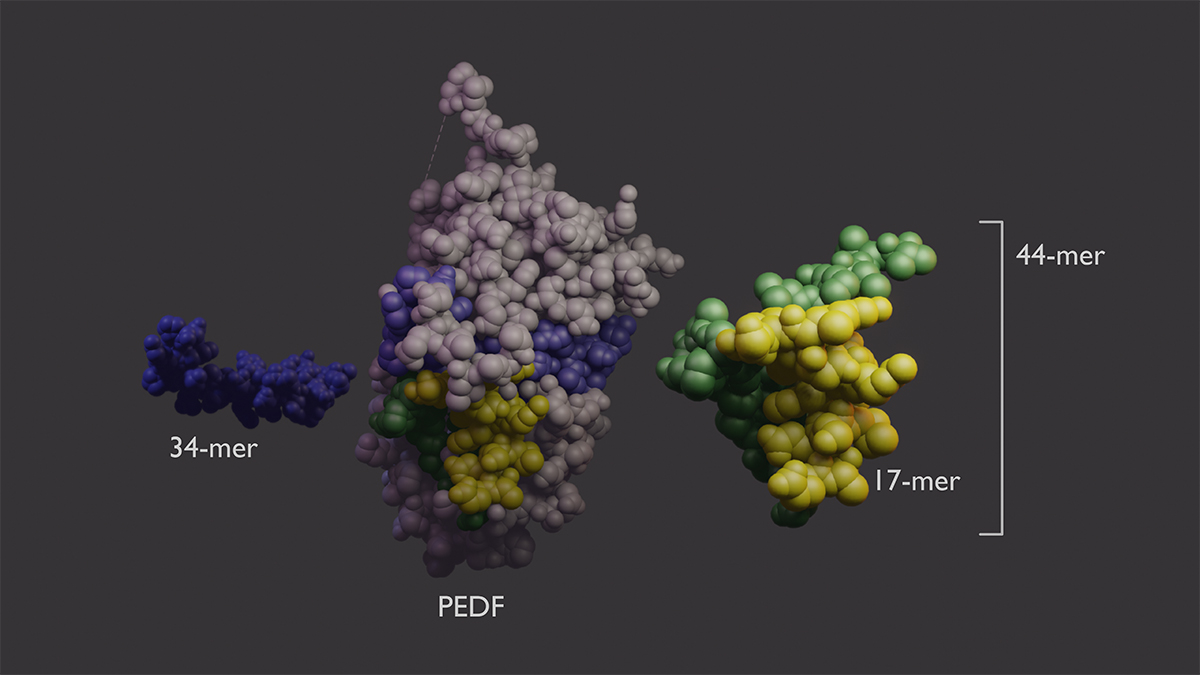 NIH study breaks down pigment epithelial factor to understand how it protects and stimulates retinal neurons.

Researchers at the National Eye Institute (NEI) have determined how certain short protein fragments, called peptides, can protect neuronal cells found in the photosensitive retinal layer behind the eye. The peptides may one day be used to treat degenerative retinal diseases, such as age-related macular degeneration (AMD). The study published today in the Journal of Neurochemistry. NEI is part of the National Institutes of Health.

A team led by Patricia Becerra, Ph.D., head of the NEI section on protein structure and function, had previously derived these peptides from a protein called pigment epithelial factor (PEDF), which is produced by retinal pigment epithelial cells that line the back of the eye. .

In the eye, PEDF protects neurons from dying. It prevents invasion of blood vessels, it prevents inflammation, it has antioxidant properties ̵

1; all of these are beneficial properties, “said Becerra, senior author of the study. Her research suggests that PEDF is part of the eye’s natural mechanism for maintaining eye health. “PEDF may have a role in the treatment of eye diseases. If we want to utilize the protein for therapy, we need to separate the regions responsible for its different properties and determine how each of them works. ”

The team used a well-known cell culture model system in which immature retinal cells are isolated from the eyes of newborn rats and grown in a dish with minimal nutrients. The system includes not only the retina’s light-sensitive photoreceptors, but additional types of neurons that help the retinal process and transmit visual information to the brain.

“Our model system – using cells isolated from the animal – allows us to tease the individual processes and mechanisms behind the protective effects of PEDF,” said Germán Michelis, a graduate student and the study’s first author.

The PEDF protein has functionally different domains. The Becerra Laboratory previously found that each domain can function independently. An area called 34-mer because it is formed of 34 amino acid building blocks stops the growth of blood vessels. Abnormal blood vessel growth is central to retinal diseases such as AMD and diabetic retinopathy. The second PEDF domain, called 44-mer, provides anti-death signals to retinal neurons. 44-mer can also stimulate neurons to grow neurites, finger-like protrusions that help neurons communicate with their neighbors. A shorter version of 44-mer of only 17 amino acids (17-mer) has identical activities.

Michelis and colleagues tested whether 44-mer could protect immature retinal cells in a dish. Without the presence of proteins and other cells in their usual retinal environment, immature photoreceptors die rapidly but can be conserved with PEDF.

They found that both 44-mer and 17-mer were just as capable of saving these photoreceptors as full-length PEDF.

Along with photoreceptors, the retina is packed with several other types of neurons that work together to process visual signals. Via neurites, amacrine neurons form connections, called synapses, to the cells that transmit these visual signals to the brain. Becerra and colleagues found that PEDF stimulates amacrine cells to develop neurites in their cell culture model, and that 44-mer and 17-mer were at least as effective – or better – at stimulating these compounds than the native protein.

Additionally, the 44-mer and 17-mer peptides function by binding to a protein receptor (PEDF-R) on the surface of neurons. PEDF activates PEDF-R, which treats molecules such as docosahexaenoic acid (DHA), an omega-3 fatty acid that is critical for infant development and eye hygiene. PEDF-R was discovered earlier by Becerra lab.

“We have long known that DHA is important for retinal health. We believe that PEDF signaling can be a key component in the regulation of omega-3 fatty acids such as DHA, both during eye development and by maintaining eye health over time, ”Becerra said. “We hope to exploit some of these protective effects in a peptide-based therapeutic approach in the near future.”

This study was funded by the National Eye Institute Intramural Program and the National Research Council of Argentina.

This press release describes a basic research result. Basic research enhances our understanding of human behavior and biology, which are fundamental to promoting new and better ways of preventing, diagnosing and treating diseases. Science is an unpredictable and step-by-step process – every research development is based on past discoveries, often in unexpected ways. Most clinical advances would not be possible without knowledge of basic basic research. To learn more about basic research, visit https://www.nih.gov/news-events/basic-research-digital-media-kit.

NEI is leading the federal government’s research on the visual system and eye diseases. NEI supports basic and clinical science programs to develop vision-saving treatments and meet the special needs of people with vision loss. For more information, visit https://www.nei.nih.gov.

About the National Institutes of Health (NIH):
The NIH, the nation’s medical research agency, includes 27 institutes and centers and is a component of the U.S. Department of Health and Human Services. The NIH is the primary federal agency that conducts and supports basic, clinical, and translational medical research and investigates causes, treatments, and cures for both common and rare diseases. For more information about the NIH and its programs, visit www.nih.gov.

NIH … To make discovery a health®