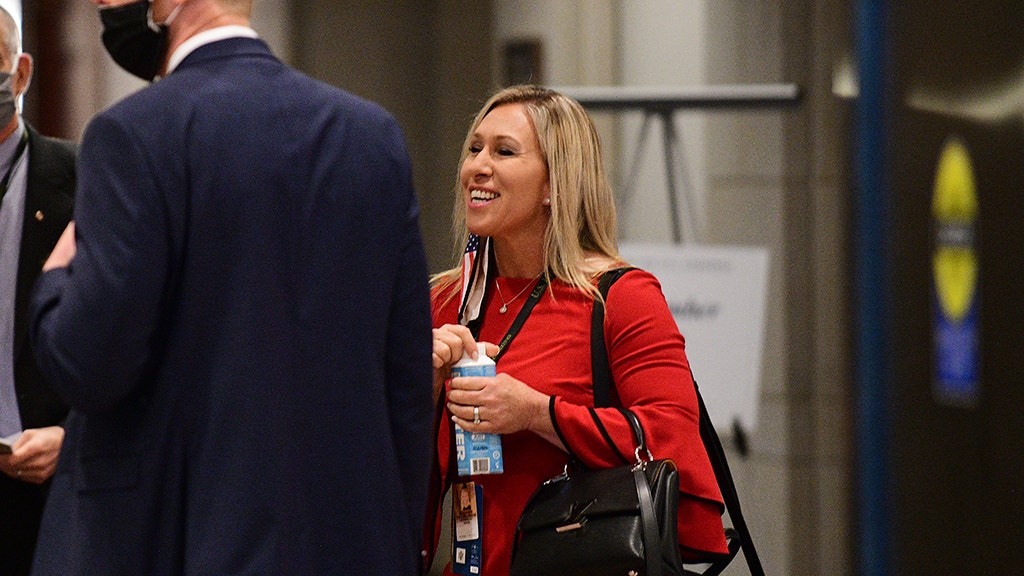 Rep. Marjorie Taylor Greene defended her decision not to wear a mask when locked in a safe room with other MPs during the Capitol riots, and the Republican in Georgia pushed back against Democrats who now blame her and other maskless GOPs. members for their recent coronavirus-positive test.

Greene said she tested negative for COVID-19 on Jan. 4 in the White House and does not believe healthy Americans should be forced to nose themselves with a mask.

“It’s absolutely ridiculous and insane to blame us,” Greene told Fox News. “[We] had no COVID or any symptoms. “

; and pointed out that “COVID-positive people spread COVID.”

Asymptomatic and presymptomatic people can still spread COVID-19 to others, even when they are not feeling sick. Therefore, the Centers for Disease Control and Prevention recommends keeping six feet apart and wearing a mask to stop the spread.

Greene was one of six House Republicans caught on video by Punchbowl News gathered together – and unmasked – during the lockdown when Trump supporters stormed the Capitol on January 6. The Democratic Rep. Lisa Blunt Rochester of Delaware approached the GOP members who offered them masks, but they refused.

After the lengthy shutdown, the attending physician at the Capitol Congress told Jan. 10 that members who had been clustered together for hours in the security room during Wednesday’s riots could be at risk for coronavirus.

“Individuals may have been exposed to another resident with coronavirus infection,” wrote Dr. Brian P. Monahan to House members Sunday.

Since then, at least three Democrats have tested positive for coronavirus and have given their time in the safe space accused of their exposure: Rep. Brad Schneider of Illinois, Pramila Jayapal of Washington and Bonnie Watson Coleman of New Jersey.

Schnieder on Tuesday slammed his GOP colleagues for walking maskless in the same room as him, shouting their “selfishness” and “disregard for decency.”

“Today I am now in strict isolation, worried that I have risked my wife’s health and anger at the selfishness and arrogance that anti-masks have put, which puts their own contempt and disregard for decency before the health of their colleagues and our colleagues and security. ”Schneider said in a statement.

Jayapal also blasted her maskless GOP colleagues for her COVID-19 test result, saying they “cruelly refused to wear a mask but hopelessly mocked colleagues and staff who offered them one.”

Rep. Grace Meng, DN.Y., posted the video of the mask-free GOP members in the security room, blasting them for “ruthless danger to the lives of my colleagues, staff and journalists.”

Greene has been fiercely opposed to coronavirus restrictions and previously called masks “oppressive.” She wants states and corporations to reopen and believes the shutdowns are too harsh on the survival rate of those who get the virus. She says she wears a mask around her father who has cancer because it is important to protect people in extreme risk groups.

Greene said if anyone is to blame for the coronavirus outbreak at the Capitol, it’s House Speaker Nancy Pelosi, D-California, to let rep. Gwen Moore, DN.J. come to the Capitol and vote on the floor of the house for her loudspeaker after testing positive for coronavirus. She said Pelosi put colleagues at risk of winning a narrow vote for the speaker.

“It is completely stupid for people to blame us, as rep. Moore and others entered the chamber, the Capitol building and the city with COVID, ”Greene said.

“The blame lies entirely with Nancy Pelosi and the positive COVID members who bring COVID to the Capitol,” Greene added.

“Nancy Pelosi put us all in danger by bringing a COVID-positive member into the chambers of the House,” Boebert said.

Moore was not in the safe room during the shutdown with the other members recently diagnosed with coronavirus, according to her office.

Moore said she tested positive for coronavirus 11 days before the speaker’s vote, saying she was cleared to travel to the Capitol by her doctor. Moore, who turned up to vote for Pelosi as a speaker on Jan. 3, said she was diagnosed with the virus on Dec. 23.

Moore issued a statement about her diagnosis on December 28, six days before the speaker’s vote – which probably triggered the initial glow that she might be traveling to DC in the middle of quarantine.

Moore, who was seen wearing a mask on the floor of the house, said she did not endanger her colleagues.

“I would like to assure all my colleagues, constituents and the people working within the Capitol complex that I have complied with all medical and CDC guidelines after my COVID-19 diagnosis and isolation and that I am COVID-restored and safe to work and vote on behalf of the people of the Fourth District of Wisconsin, “Moore said in a statement at the time.” While I quarantined immediately after exposure on December 22 and tested positive the next day, I have been diligent in working with doctors to put my health and public health first. “

The CDC recommends staying home for 14 days after exposure to coronavirus and isolating for 10 days after the first symptom develops, or 10 days from a positive test if no symptoms develop. Sunday, January 2, would have been the 10th day since Moore’s positive test, although she did not say if the symptoms had developed.

A Democratic staffer told Fox News that the attending physician cleared Moore of being on the floor of the house and management was not interfering in the physician’s work. “There’s no way the source of this was Gwen Moore,” the assistant told Fox News.

“If a doctor cleared Gwen Moore of being on the floor, she was not a risk.”

Meanwhile, three other members of Congress were allowed to vote for Pelosi, who speaks through “special events” because they were still in their quarantine windows despite testing negative for the virus, according to Politico.

In addition to Greene, the other GOP members were seen in the safe room refusing to wear masks in the video Reps. Markwayne Mullin of Oklahoma, Andy Biggs of Arizona, Scott Perry of Pennsylvania and Michael Cloud of Texas. Fox News reached out to all members of Congress about why they did not wear masks and when they last tested negative for coronavirus. They did not respond to requests for comment.

A sixth member of Congress, rep. Doug LaMalfa, R-Calif., Is also seen in the video maskless, but his office said it was because he had just sat down at the table to eat.

“He was obviously eating and drinking at the time of this video, and his mask was next to him on the table,” Mark Spannagel, chief of staff of LaMalfa, told Fox News.

Like Greene, LaMalfa’s office called on Pelosi and the Democrats for hypocrisy.

“Given that Speaker Pelosi pressured COVID-positive Democrats to come to Washington and put them in the House of Representatives to secure her election as president, Democrats should look at their hypocrisy over their election before attacking Republicans,” said Spannagel, who refused to name specific members.

Spannagel also blew up the leaked video of the safe location for the purpose of being “partisan grandstanding.”

At least 64 current and incoming members of Congress have tested positive for coronavirus since last year. An incoming member, the newly elected Luke Letlow, R-La., Died on December 29 after contracting the virus.

House management has responded to the recent eruption at the Capitol with a squeeze on masks. Parliament was put to the vote on a rule Tuesday night that would impose a $ 500 fine for members who do not wear masks on the floor of the house and $ 2,500 for another offense, according to a senior House Democratic aide.