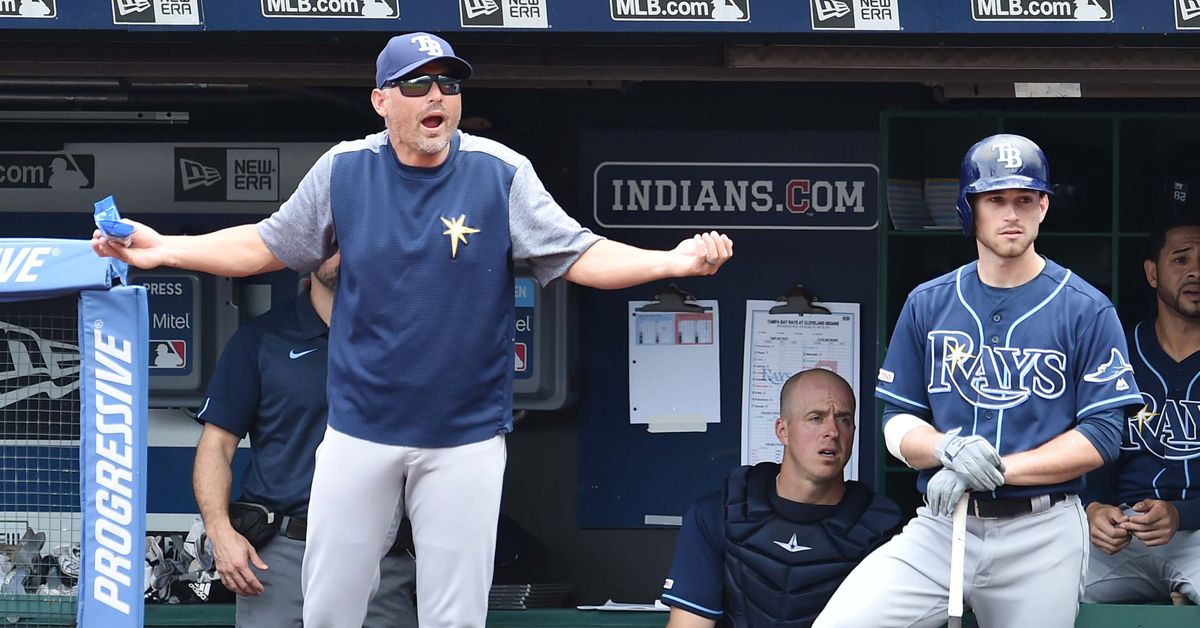 This is Austin Meadows' team, we just write about it.

Meadows had one heck of a game today, starting it off with a home run off Trevor Bauer in to open the game. In the third, he scored on a throwing error. This would be the only throwing error to a run in the game, as Kevin Kiermaier would score in the fourth on a catcher throwing error. But back to Meadows. In the fifth he was struck by a very wild, very behind the batter-looking pitch thrown by Bauer that hit Meadows in the knee. It didn't slow him down one bit when he was second, then advanced to third on a wild pitch. He didn't score in that inning, but still some incredible heads up base running. In the seventh, he singled to Robertson's score. Then in the top of the ninth Meadows hit an RBI shot to score Kiermaier that ended up with a hilariously misplayed moment where the Indians ballboy accidentally grabbed the live ball thinking it was a foul and handed it to some kids in the seats. A quick thinking kid who looked like Wild Thing Jr handed it back, correcting the ball boy.

Let's talk about Trevor Bauer for a minute, because aside from the wild pitch that landed Meadows on first, he was all over the place in that fifth inning. An aggressive mist of rain had moved in over Cleveland and the pitcher's mound was apparently taking its toll on Bauer who completely lost his sense of the strike zone. Play was stopped so that it could be dried and Bauer cold clean, but it was the beginning of the end for Bauer who only lasted one more inning. Started off with two batters and gift up four runs

The Rays, on the other hand, went the classic opener routine, with Ryne Stanek starting things off, going 1

.2 innings, giving up two hits, but also striking out three. He was replaced by Jalen Beeks who looked really solid. Through 4.2 innings or work he gave up only two hits. He did, unfortunately, also give up three walks, but struck out three as well.

In place of Beeks came Oliver Drake, who was just up to the big club ahead of the game. And let's be real for a minute here, Oliver Drake sounds like the name of a DC Comics hero. Like a plucky combination of Oliver Queen and Tim Drake. Drake, some might recall, was bounced around between several clubs over the offseason, and it was likely he would come to his major league comeback moment. Drake did give up a home run to Oscar Mercado (Mercado's first of the season), but otherwise did clean work.

Adam Kolarek came on to close things out in the ninth, and for the first time things didn't look good for the Rays. Kolarek quickly loaded the bases with no one out. A run scored on a Kevin Plawecki groundout. My kingdom for a double play. But now, Lindor single scored Luplow, and the Indians were only three runs down. That was it for Kolarek

Jose Alvarado, who was beat up by the Indians in his last appearance, was brought on to hopefully collect the final two outs. Alvarado delivered the filth – the kind we like – and struck out Mercado, putting Carlos Santana on the plate.