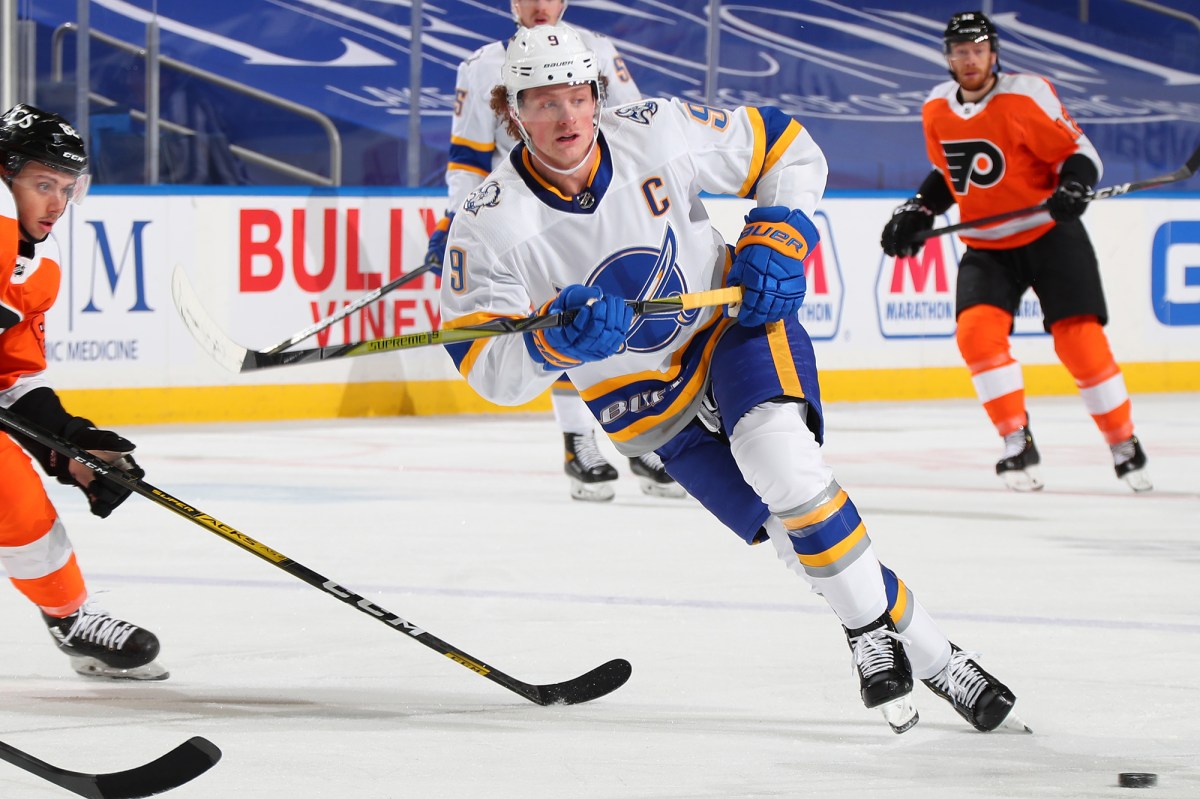 One thing Jack Eichel knew as he approached Tuesday’s game in the garden against Rangers is that he would not be serenaded by 18,000 fans with a “We do not want you!” sang like Rick Nash was when he came to town with the Blue Jackets eight days before the 2011-12 deadline and scored the equalizer with 1:33 left in regulation before Derek Stepan won it in overtime for the good guys.

(How would Eichel know that? Well, only 1,800 fans would be in the building for this one.)

Back in the day, the Big 61 was the shining apple in Rangers’ eye, the wing being perceived by then-CEO Glen Sather as the lack of link to the team’s Stanley Cup ambitions. It had been headline-generating stuff where Blueshirts were willing to share with a pretty comprehensive package to add winger to the first-team lineup.

Rangers offered, as reported at the time, Brandon Dubinsky, 201

1 first round JT Miller, Tim Erixon, Christian Thomas and the 2012 round committee in exchange for Nash, who owned a trade-free clause and therefore could choose his destination after asking out of the perennial reconstruction of Columbus.

But the Jackets’ GM at the time, Scott Howson, was greedy. He wanted more. In fact, he asked for either Ryan McDonagh or Michael Del Zotto plus Stepan or Carl Hagelin plus the rights to BC junior Chris Kreider plus Dubinsky plus a first round.

It was relatively easy for the Rangers to reject this outrageous claim. Fans weren’t necessarily against acquiring Nash themselves, but wanted no part of breaking up the Black-and-Blueshirts team that had emerged as the surprise team in the NHL. (Surprise; head coach John Tortorella wouldn’t break up the team either.)

The Rangers went to the conference finals before being upset by the Devils in six games. Months later, of course, Sather got her husband (and a third round player who would become Pavel Buchnevich) for the package with Dubinsky, Artem Anisimov, Erixon and a first round that represented the equivalent of the offer before the deadline.

Fast forward through several concussions, a presidential trophy, a trip to the cup final and disappointing playoff production from Nash before his deadline trade in 2018 to the Bruins, and nine years later, Eichel is the shining apple of Rangers eye.

The center will be out as he and his persistently undermined Saber find their way into Manhattan in the middle of what is certainly showing their 10th season in a row out of the playoffs and the sixth in a row since Eichel was selected as second behind Connor McDavid in 2015 the draft. Buffalo freshman GM Kevyn Adams may not be in a hurry to accommodate Eichel.

But when it gets real, the Rangers will be in the front row of suitors, whether they go before the April 12 deadline or the offseason. It is very rangerous to chase shiny objects, but there is a difference here. Eichel would not be superfluous. He did not want to be a luxury item. He is needed. He is also 24 years old. No Marcel Dionne, here.

Mika Zibanejad’s mysterious death has created an urgent need for Blueshirts to address their problems in the middle. It’s no longer about Ryan Strome’s viability as the long-term second-line center. It is no longer about having a tendency for in-depth problems through the organization. Rather, it is about the first line where the idea of ​​hierarchy was settled with the emergence of Zibanejad the last two seasons.

Of course, there was last year’s insane finish that produced a 41-goal, 75-point season in what became a 70-game schedule where Zibanejad played 57 competitions. It strengthened Zibanejad’s credentials as a top echelon center. Over the past two years, the 27-year-old Swede collected 149 points (71-78), which was the 20th best in the NHL overall.

But this year? Well, through Monday, 166 attackers had been on the ice for at least 235:00 p.m. Five against five, according to NaturalStommy.com. Zibanejad was 166th and last in production with a point (an assist) in 237: 10. Zibanejad of course has another year on his contract before he can become a free agent after 2021-22. It seems impossible for the Rangers to extend him over the summer.

This creates the urgent need for a first-line center. Now you may notice that Eichel is 149. among qualified strikers in five-on-five production with five points (1-4), but it is pretty much a product of organizational dysfunction so much any deficit in his game. No one questions his status as a stud.

Rangers will have to pay for Eichel, who has another five years left on a deal that presents a fixed price of $ 10 million per, no doubt about it. It’s almost impossible to conjure up a scenario where Blueshirts could fit the BU product – which played for David Quinn – under the hood unless Zibanejad (with a no-move clause) is part of the package going the other way. But summer is coming and the possibilities will be endless, albeit expensive. Nash-like expensive.

Browns’ Jadeveon Clowney targets NFL Defensive Player of the Year: ‘I’m here to prove I can still dominate this league’