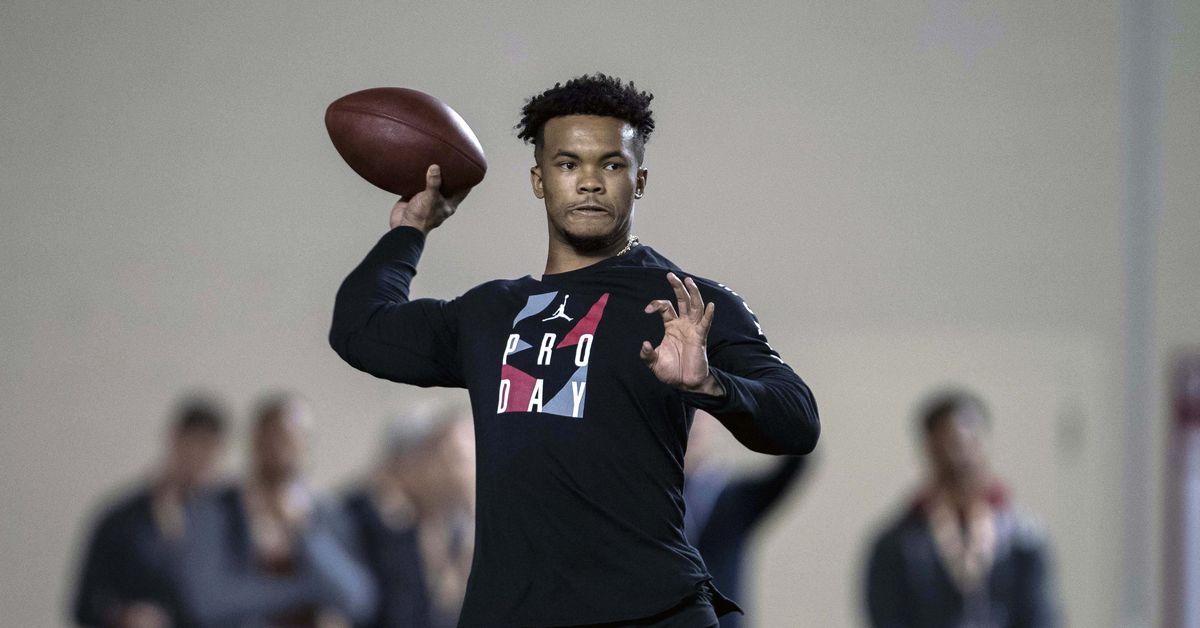 Greetings, Raider Nation! Raiderdamus the Great and Powerful has returned to you today, with much uncertainty on the horizon. The Draft is right around the corner, and nobody knows who is going where, and what the fortunes of all these teams might be. Which teams will grab new quarterbacks? Which ones will improve their pass rush, or secondary?

Well I'm here to tell you. While the Great Raid Amsterdam will not be predicting trades in this mock, I can tell you what teams should be, which players if they were all as smart as I am. Which they are not. So they will probably do something foolish.

And away we go.

Whenever a team hires a new coaching regime, the first thing they do is get a new quarterback. That is one of the reasons people keep thinking Jon Gruden will move on from Derek Carr. But the Cards will move on from Josh Rosen, who is nothing special. Murray is special, and can help the Cardinals compete in a very tough division.

The 49ers with with Quinnen Williams at and IHOP this week. They've shown plenty of interest in him. Don't buy it. They already have two DTs in DeForest Buckner and Arik Armstead, but Solomon Thomas didn't mean much. Dee Ford will be the edge countering to counterpart.

The Jets actually might have something going on here, landing Leveon Bell and CJ Mosley in free agency. They could use a solid DT to pair with Leonard Williams, and Quinnen here might be the best overall prospect in the draft. They can address their WR issues later on.

Jackpot. If there is one player in this draft who resembles forms Raider edge rusher Khalil Mack, it's Josh Allen, who wrecked games single-handedly for Kentucky just like Mack did for Buffalo. Oakland's biggest need is edge rusher and they land potentially the best one in the draft right here.

The Bucs just lost Kwon Alexander to the 49ers, and even if they didn't, this pick makes sense. White is a hyper-athletic, fluid linebacker, and a supreme playmaker. He's exactly what a young team like Tampa Bay needs. He has boom or bust potential, so either either awful or full turn into Derrick Brooks.

A week or so ago, reports came out that the Giants didn't like Haskins and hadn't done much work on him. Anyone with a brain knew that was garbage, and new reports came out saying how much the Giants love Haskins. The Giants and Dave Gettleman are total idiots, but they won't mess this up. [7] Jacksonville Jaguars – Jawaan Taylor OT, Florida

The Jags' defense is not a big problem, but their offense is. With Nick Foles under the center, the Jags can actually run a normal offense, but they'll need to protect Foles like the Eagles did. Taylor is the best OT available.

Detroit is sure to lose pass rusher Ezekiel Ansah to free agency, and they don't have much on the edge behind him. Gary makes sense as a local kid with tremendous physical talents. With Patricia may be able to turn him into something. [9659052] 9. Buffalo Bills – Ed Oliver DT, Houston

The Bills have a really underrated defense, but they could use more interior pressure after the retirement of Kyle Williams. Oliver here is as obvious a pick as it gets.

John Elway doesn't consider Joe Flacco a stop-gap quarterback, showing that John Elway thinks we're all stupid. He absolutely has to take his QB of the future here, or when Flacco goes down with a ruptured tailbone in Week 4, the Broncos' season will be over. Lock has a big arm and was impressive at the Senior Bowl. He's a great fit for Denver, sadly enough.

Do you see a lot of holes there? I do not. They have talent everywhere. Maybe with some decent coaching, they'll make some noise. In any case, the Bengals always favor athletic specimens, and Metcalf is as specimen-y as it gets. He can book with AJ Green at receiver and a fine combo, even with Metcalf's limited route tree.

Sweat has fallen far enough. Even with his heart condition, he is too big and too good to be on the board. The Packers have some money in their pass rush this year, but they could add more to the three other very good quarterbacks in their division. If the Packers donate because Sweat, someone will trade up for him.

The Dolphins have been mocked to take a quarterback forever, but they are clearly tanking for the 2020 class with their eye on Tua Tagovailoa . Robert Quinn and Cameron Wake out of town now, so the Dolphins need something at edge rusher. [14659081] 14. Atlanta Falcons – Christian Wilkins DT, Clemson

The Falcons tagged Grady Jarrett, and the prospect of pairing him with Wilkins is incredibly enticing. Atlanta already has a tremendous roster, but must stay healthy.

The Persons paid Alex Smith a billion dollars to run around and throw to nobody and break his ankle. You should have a sensible team and get a QB on a rookie deal. They have plenty of needs on offense, but this is the most important.

Carolina has a ton of needs all over the field, and the whole team basically collapsed last year after relying on Cam Newton's heroics until his brain got splattered all over the field. But pass rusher is a good place to start, and Burns is a physically impressive one with a good mind for the game.

The Giants play in a division with three very good offensive lines. They don´t have a lot of pass rushing, but nobody is good value here. They also don't have much to do with defensive tackle, and Lawrence is value here. He's fallen down draft boards after missing the National Championship game after failing a drug test, probably for some Chinese weiner pills or something.

Dillard is, without question, my favorite offensive player in this draft. He's everything you look for to offensive tackle-size, speed, footwork, mean streak. The total package. The Vikings have a terrible line and if they don't want to get Kirk Cousins ​​killed, they won't pass on Dillard here.

The Titans are a funny team, they like to play Big Ten football and pound you into the dirt with their running game and defense. However, in the NFL that only works if you are facing 9-man boxes on every first down. AJ Brown is a bona fide # 1 WR who is getting lost in the shuffle after what his teammate, DK Metcalf, did at the Combine. Brown is better

Pittsburgh is a team in disarray after losing its top two offensive players, but true to form they will be stubborn and get a linebacker because they're the steelers. Bush is a perfect fit for them. Ben Roethlisberger will be ecstatic to have acquired Bush.

All are honest here, the likelihood that Seattle makes this pick and doesn´t trade practically zero. They have very few draft picks and plenty of holes to fill. But someone will trade up, and found a likely target as the first of the three star tight ends off the board.

The Ravens have lost a ton over this free agency period and done very little outside of signing Mark Ingram. They have NOTHING at wide receiver. Harry is a big target with sure hands who will be Lamar Jackson's new best friend.

Houston just spent a bunch of money on its offensive line, but their skill position players are severely lacking. Brown could be a dangerous threat to Other Hopkins.

I did not add any stretch of the imagination to this mock for the raiders, because what would be the point? There are just too many talented players here and somebody is going to fall through the cracks. For Oakland, thats Hockenson, and he solves the problem created by the loss of Jared Cook.

Jay Ajayi is a free-standing knee surgery and the Eagles are paper-thin at running back behind him. Jacobs makes total sense here, and can share the backfield with Donnel Pumphrey and Corey Clement.

The Colts are already a playoff team with few holes. When Peyton Manning was at his best he had two top WR targets. Why not give Andrew Luck the same, taking Butler to go with TY Hilton?

It seems odd for the first cornerback to go off the board here, but that's what I've got. Murphy was most likely the best defensive player in the Pac-12 last year and should give Oakland an amazing pair of bookend corners.

Another corner goes here, as the Chargers bring in Williams to replace the departed Jason Verrett. Los Angeles doesn't have a lot of needs and the WRs are good value here. Williams is

The Chiefs are in full destructo mode after switching to a 4-3 defense, releasing their two best pass rushers . Polite will fit in just like their new Dee Ford, playing DE / OLB in the ketchup and mustard.

The Packers have Devante Adams but not much else as weapons for A. A. Ron Rodgers. They do have Jimmy Graham at tight end, but his best days are way behind him. They take Smith here to give some hope for the future at the tight end spot.

LA is going to the Super Bowl and lost, and their offensive line is kind of a mess. Defensively and at the skill spots they are found, but Ford will give them some versatility on the left side of the line and possibly replace Andrew Whitworth down the line.

Risner can play all over the line, and the Patriots just lost a big cog in their machine with Trent Brown leaving for Oakland. Isaiah Wynn could spot in the LT spot, but that just makes another hole. Ransom all over the line and just seems like a patriot to me.

So there's the first round, if I see it. There will be good players left for the second round, if you don't have DeAndre Baker or Zach Allen or Jaylon Ferguson going in the first round of this mock. The Raiders are absolutely made out of bandits, as I suspect they will do in real life as well.