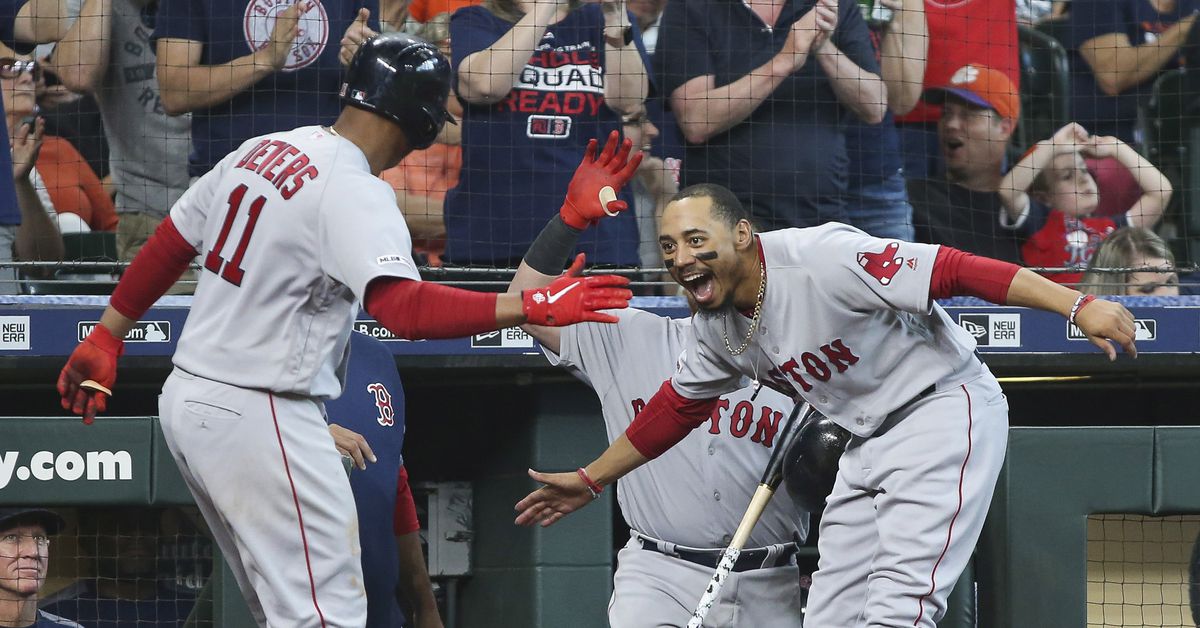 For the second consecutive Sunday, the Red Sox were facing off against the Astros having lost their previous two games and headed into a series final trying to avoid a sweep. For the second consecutive Sunday, they got the job done. This time, it was Eduardo Rodriguez leading the way as the lefty looked a little shaky early on but got better as the game went along. By the time he reached the final few innings of his six-inning outing, Rodriguez was dominating. The offense had a tough matchup against Justin Verlander and certainly did not explode or anything, but they did enough with Rafael Devers going to highlight the effort. Throw in three scoreless innings from the bullpen, and you've got yourself a victory.

The first two games of this series were defined by a lot of things, and pretty much you could come away with the conclusion that Houston was the clear, better team. It was a fair thought just from the fact that they had won two games in two consecutive three-game series within a week of each other, and they had a chance to make it five of six overall in the matchup. From a Red Sox perspective, though, a few of their four losses were winnable games, with bad mistakes on the bases and in the field combined with poor situational hitting things much more difficult than they should have been. It was a reality that they were going to have their best on Sunday with the ageless Justin Verlander on the mound.

For all of Boston's self-inflicted errors this weekend, the pitching for Houston had been very good as well, and Verlander represented the best pitcher Boston would see in the series. They were, quite simply, going to be a hell of a lot better to get to him. Things didn't get off to a great start, with the top of the order going down 1

-2-3 in the first before Verlander came out and struck out the page in the second.

Meanwhile, Eduardo Rodriguez was going for the Red Sox coming off one of his worst outings of the year. We all know the story with Rodriguez at this point, with all of the talent in the world but a frustrating inability to consistently show it off. After a tough start like his previous one in Toronto, there is always the chance for that to snowball. The Astros got right to him in the first, and Boston made more mistakes to exacerbate the issue. That bottom of the first started with a leadoff single from Aledmys Diaz, and then after a couple of outs – one of which saw Díaz move up to second – Carlos Correa ripped one to the left side. The ball deflected off Rafael Devers and went into the shallow left field. Though aggressively tried to score on the play, Eduardo Núñez had the time to get to the record to end the inning. Instead, his throw was a bit to the left of Christian Vázquez and the catcher took his eye off the ball and went for the tag early. He could not come up with the poor throw, and Diaz gave Houston a 1-0 lead.

The good news is Rodriguez settled down some after that. Houston did a pair on the second with a single and hit-by pitch, both with two outs, but no runs would come across to score. Alex Bregman then led off the third with a leadoff double, but Rodriguez kept the runner in scoring position to keep the Astros at one. He came out with a pair of consecutive perfect innings in the fourth and fifth, too, to extend his outing longer than it initially appeared to be. Rodriguez would end up going one more, facing just three batters in the sixth thanks in part to a successful back-pick by Vázquez. He ended up with six strong innings in which he allowed just one strike on four hits and a walk with five strikeouts. The lefty also retired 11 of the last 12 batters he faced.

Meanwhile, the Red Sox offense started to get to Verlander a bit in the third. There, it was Steve Pearce starting things off with a base hit before moving on to second on a wild pitch. After a ground out moved the runner over to third, Andrew Benintendi came through with a fly ball deep enough to center field to get Pearce home, and the Red Sox had the game.

In the fifth, they would make it three straight innings, too, with the Astros looking a bit like the Red Sox from earlier in this series . Nuñez started this rally with a double ripped out to left-center field before Benintendi hit what appeared to be a routine ground ball to second base. Instead, Yuli Gurriel – who moved over from first base after Díaz left with an injury – booted it into right field. That allowed Núñez to score for Boston's third run of the day. They had a chance for more, too, when Benintendi moved to second on a chair base and to third on an error by Bregman, eventually giving them second and third with Devers and J.D. Martinez coming up. Those two couldn't come through, though, and the Red Sox settled for the 3-1 lead.

From here, we fast-forward to the bottom of the seventh with the same score on the board and Brandon Workman heading in two pitch for Boston. He came through with a perfect inning of work. After the Red Sox got two on but could not score in the top of the eighth, Matt Barnes came on for the bottom half after his brutal appearance on Saturday. He looked a bit better this time, struggling with control a bit and walking one but otherwise getting the job done in a scoreless eighth.

Boston would add another insurance run on Jackie Bradley Jr. walk, a beam caused by a stolen base attempt, a wild pitch and a ground out. So, with a 4-1 lead Marcus Walden came on looking for the save. The Red Sox will now head back home for a quick stop at Fenway in a three-game game against Cleveland that starts on Monday. They'll send Rick Porcello to the moon to take on Jefry Rodriguez.