Radical Buddhist monks are charged with sedition in Myanmar 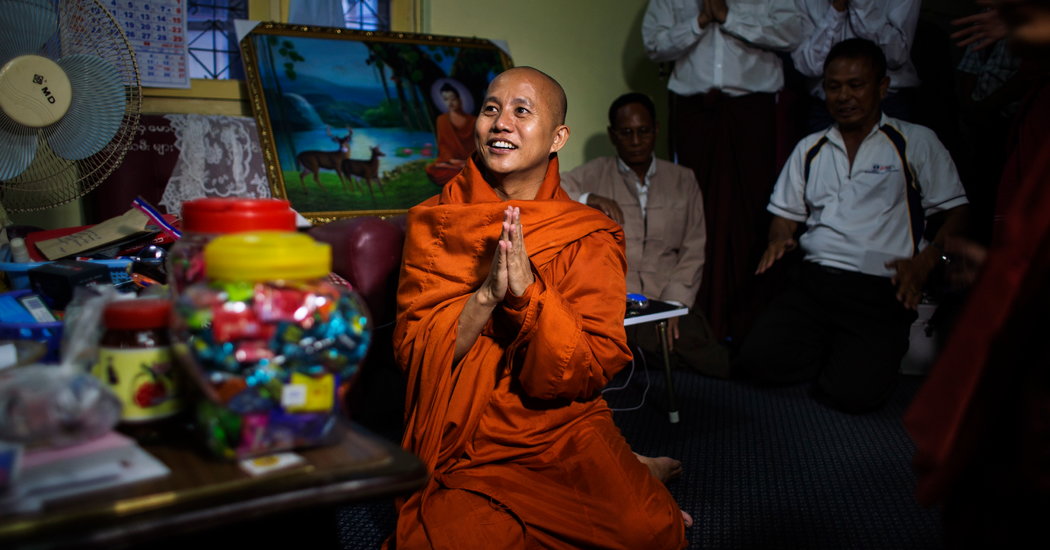 SITTWE, Myanmar – Ashin Wirathu, a radical Buddhist monk in Myanmar, has been accused of excitement over what prosecutors say are defamatory remarks he made about the nation's civilian leader, Nobel laureate Daw Aung San Suu Kyi.

Most notorious of a band of extremist monks, Ashin Wirathu has raised the country that delivers diatribes against Myanmar's minority Muslims and accused Mr. Aung San Suu Kyi's government to people the military's efforts to defend the Buddhist majority nation against what he calls a Muslim attack.

In a speech this month, Ashin Wirathu said that the civilian government was funded by foreigners and that a member of the government "slept with a foreigner."

Ms. Aung San Suu Kyi was married to a British scholar who died of cancer in 1999 while under house arrest of the military junta who controlled the country for nearly half a century.

Ashin Wirathu and other ultra-nationalist monks paint Myanmar as a peaceful Buddhist country was overrun by Muslims, even though they only make up about 5 percent of the population, even before the majority of the Rohingya was expelled from the country. The military junta imprisoned Ashin Wirathu for eight years to encourage hatred.

In 2014, two years after Ashin Wirathu's release, nationalist monks formed a group called the Association of Protection of Race and Religion, known by its local acronym, Ma Ba tha. The group, which received national membership and enthusiastic support especially from women, successfully fired laws that make it more difficult for Buddhist women to marry outside their faith.

But in 2017 before the worst violence against Rohingya, Myanmar's body of Buddhism Ashin banned Wirathu from the public sermon for a year, a ban on the monk protesting by sending pictures of himself online with an "X" wallpaper over mouth. The same body also banned Ma Ba Tha, but the group just changed its name and continued its activities.

Even though Ashin Wirathu was punished by the state's monastic authority, he continued to move the country to deliver his anti-Muslim sermons, including in Rakhine State, home to Rohingya. Shortly after the ethnic cleansing campaign began in 2017, he was depicted in the state news media on a tour of Northern Rakhine, the epicenter of the anti-Rohingya violence.

In his hated sermons, delivered in a deceptive monotony, Ashin Wirathu referred to Muslims as "mad dogs" who "breed so fast", "steal our women, rape them" and "want to occupy our land . "

He has instructed Buddhists to "make your blood boiled" To avert Muslims as he accuses of using hyperfertility to flood Buddhist multilingual nations.

At a rally last year in Yangon, Myanmar's capital of commerce, Ashin Wirathu said that the day Myanmar officials were brought to the International Criminal Court, which conducts a "preliminary investigation" of the Rohingya deportation, was "the day that Wirathu has a pistol." Such militant statements go against Buddhism's peaceful principles, but Ashin Wirathu has said that extreme times are Equire extreme measures.

Although Ashin Wirathu had a poster by Mrs. Aung San Suu Kyi who decorated the wall on her wooden cloister in the town of Mandalay, he has accused his political party, the National League for Democracy, of secretly supporting a Muslim agenda.

During Myanmar's decades of military rule, many of the party's leaders were imprisoned, including Ms. Aung San Suu Kyi, who was freed in 2010. In 2015, the election was designed to create a military-civilian hybrid government, her party won by a landslide. But, unlike in previous elections, it was not a Muslim candidate.

The anti-Muslim ambience was already all over the country, with extremist monks crying at the persecution of Rohingya and other Muslims.

This month, a group of nationalists in Yangon stormed Muslim prayer halls set up for the holy month of Ramadan. Local officials have called for arrest of mob leaders, but they are in hiding.

Myo Thu Soe, a police spokesman, said that while charges against Ashin Wirathu were filed on Tuesday, police had not yet received arrest warrant for Yangon, where aides said Ashin Wirathu arrived Wednesday to meet with the state Buddhist authority. The meeting was later canceled.

"I'm in Yangon. I'm not hiding," Ashin Wirathu told The Times on Wednesday. "They can arrest me. I am not afraid of the prison."

Ashin Wirathu's supporters have opposed the government's religious body for his actions against radical monks.

"They are always trying to arrest monks," said U Yarza, one of Ashin Wirathu's helpers. "It's very disappointing for the country's Buddhism."

Ashin Wirathu added, "fear nothing, even if he is arrested. He always does the right thing for our country."