Putin: Is he right about wind turbines and bird deaths? 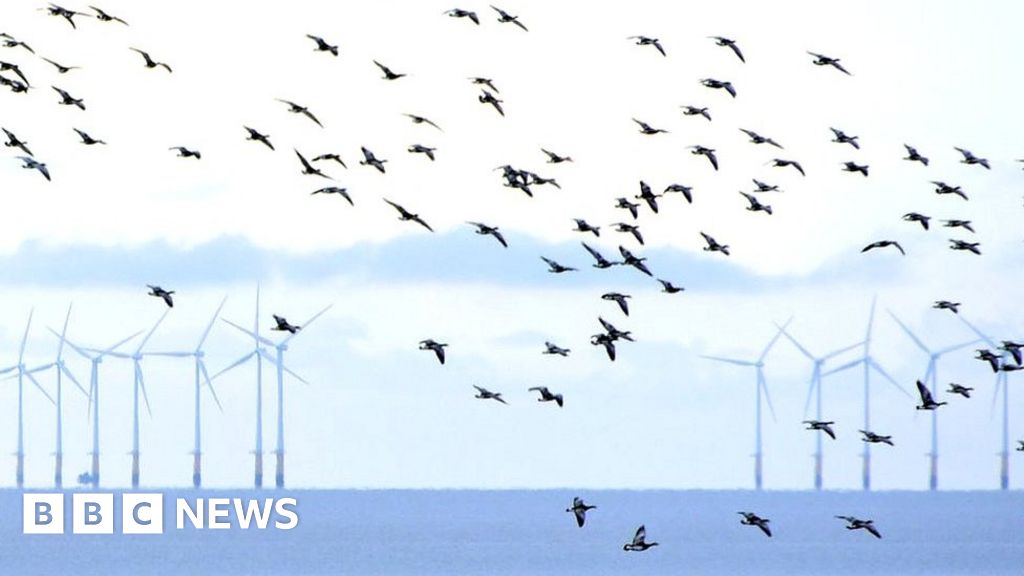 Russian President Vladimir Putin has warned against over-reliance on renewable energy, something he says harms birds and other wildlife.

Speaking at a global manufacturing conference, the president said: "Wind-powered generation is good but are being taken into account in this case? How many birds are dying?"

"[Wind turbines] shake, causing worms "This is not a joke," he said.

1; a collisions with turbines or because of habitat loss.

We couldn't find any reference to worms.

It's hard to get at a definitive figure on how many birds are killed by wind turbines, though, and estimates vary.

But it's not only wind power that harms wildlife.

A study published in 2009 looking at the US and Europe estimated that wind farms were responsible for about 0.3 bird deaths for every 1GWh of electricity generated, compared with 5.2 deaths per 1GWh caused by fossil-fueled power stations.

It said this would equate to the deaths, every year, in the US, of about 7,000 birds caused by wind turbines, 300,000 by nuclear plants and 14.5 million by power plants using fossil fuels.

It's a fairly old study so this may have increased with the growth of wind power in the US or decreased with better understanding of how to mitigate the risks.

Another study in 2012 found that fossil-fuel-powered plants killed birds during mining, through onsite collision, electrocution with plant equipment and poisoning.

Whatever the exact number, and how it compares with fatalities to fossil fuel plants, it is generally considered that any harm to birds could be mitigated by locating wind farms away from major migration routes and feeding, breeding and roosting spots.

The UK-based Royal Society for the Protection of Birds (RSPB) says that if this is done, wind farms will have "minimal impacts."

It says that there is a greater long-term threat to birds and other wildlife – climate change. And it recognizes the role of renewable energy in tackling this.

According to the LSE's research institute on climate change and the environment, "the benefits for wildlife or mitigating climate change are considered by conservation charities … to outweigh the risks,

President Putin's message followed news that Russia would ratify the international Paris agreement, and came fresh on the heels of meeting world leaders, including Theresa May, at the G20 summit to discuss climate change.

He may have had other things in mind than the birds when he made this comment, though.

These make up about 60-70% of Russian exports and the income from them funds about 40-50% of its budget.

A decree issued by Mr Putin in May described the development of green technologies as a "threat to economic security ".

And, if you can see the table above, it gets a tiny proportion of its energy from wind.