Pixel 4 is about a huge notch for a giant forehead 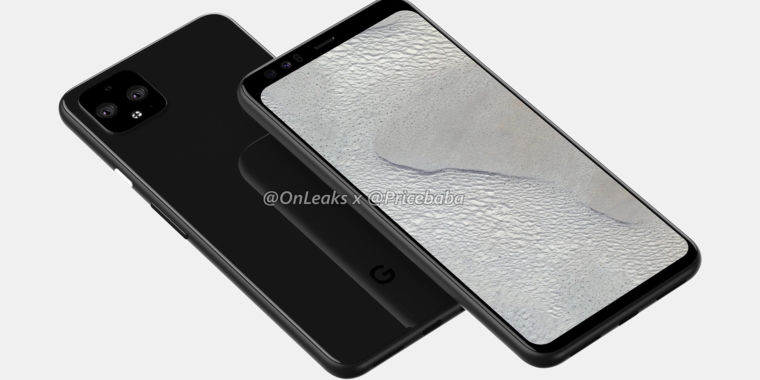 When we last checked in to Pixel 4, Google leaked itself by sending out back designs to Twitter. Today we get a better look at the front of Pixel 4 XL thanks to a new set made from OnLeaks and Pricebaba. OnLeaks has spearheaded the design of several units earlier, so it's worth paying attention to.

With the Pixel 3 XL design, Google chose to embrace the cut screen design trend with what was probably the biggest notch ever mounted on a smartphone. It was twice as high as other hook designs, and Google used it for two cameras in front of the camera (the extra one was wide-angle) and an earpiece / speaker. The hooked design was not very popular or good looking. This year, Google turns back to a traditional top edge.

Despite the extra space reserved at the top of the phone for components, this reproduction does not show any additional hardware compared to Pixel 3. There are still two front cameras, one earplug and two front sensors, which are typically a proximity sensor and a sensor with automatic brightness.

The bottom edge is shrunk down to almost nothing. At Pixel 3 (and Pixel 2), the bottom edge was to house a large front speaker grill. This year, after the playback, the bottom speaker moves to the bottom of the phone next to the USB-C port.

With no headphone jack to worry about, rendering shows two "speaker grids" on either side of the USB-C port. If Pixel 4 is set up like most other smartphones, you get a bottom burner, with the other grill being there for symmetry and usually tuning the microphone. The typical setup is to have stereo sound by combining the bottom burner speaker with the front burner that can double as a normal speaker.

These are technically made by Pixel 4 XL, which OnLeaks says will have a 6.25 display.

We already have official Google-delivered phones on the back of the phone, but Google's image was not very clear about the number of cameras. This OnLeaks render shows three cameras. XDA developers have recently found a reference to a "tray telephony" lens in the Google Camera app. Since the Google Camera app works only on Pixel phones, and none of the existing pixels have rear telephoto lenses, it's a good game that the camera lens # 2 on Pixel 4 is a telephoto lens.

We do not know what the third smaller lens is for. A good guess would be a time-of-flight sensor for 3D sensing as these are usually smaller than a normal camera lens, and since Google loves AR camera technology. With all these extra cameras, there is a chance that we finally see a smartphone that can match the 3D sensing of the old Project Tango smartphones from 2016. Google has implemented a dimmed version of the Project Tango technology on single camera smartphones called ARCore, but ARCore can only really detect flat surfaces like walls, floors and tables. Tango was a full 3D sensing smartphone and could even be created as a 3D scanner. It was great.

Nevertheless, this top-heavy design certainly looks strange. It seems that Google will once again march to its own drum's beat and choose not to compete with the best screen smartphone designs out there. Next to a OnePlus 7 Pro, Pixel 4 looks positive and it's not even yet! As it has been typical with the Pixel line, Google has to sell people to a different function than the design. Maybe the headline feature will return to the Project Tango features? Maybe it's the air movement driven by Project Soli?

Pixel 3 saw sales fall year over year, and Pixel 4 doesn't look like a big departure from Google's strategy. It's hard to imagine a big drop in price, either: the bill of materials will of course be higher this year with these extra cameras, and Pixel 3A goes up to the mid-range price range. For now we will keep an eye on more leaks between now and the launch, which must be sometime around October.