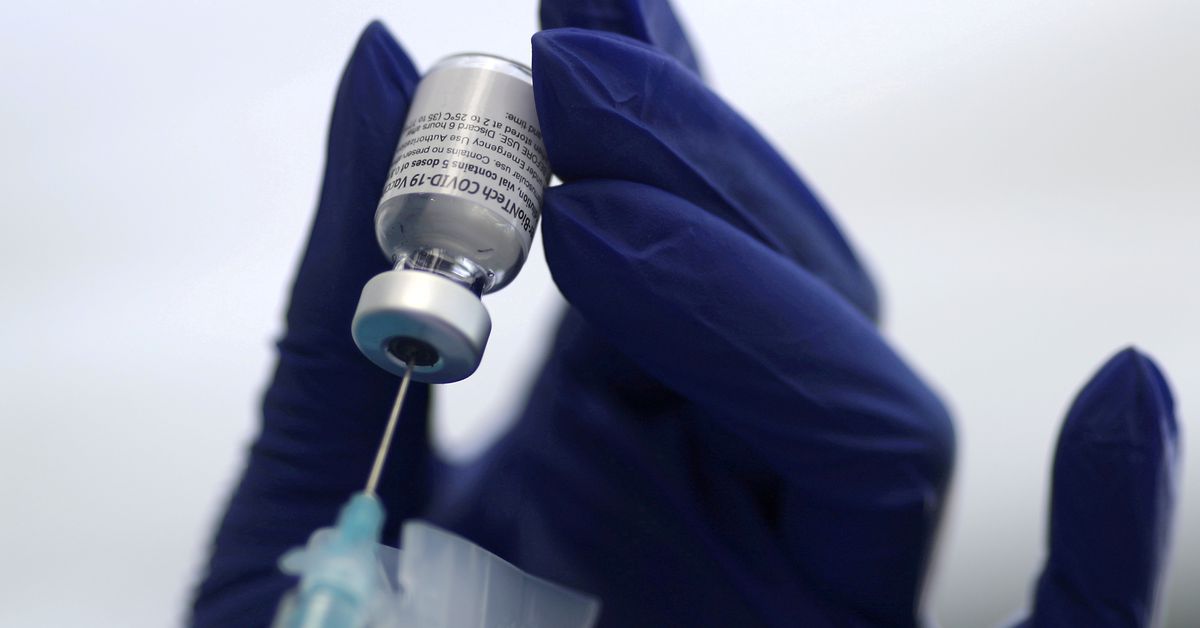 NEW YORK, July 9 (Reuters) – Pfizer (PFE.N) and partner BioNTech (22UAy.DE) plan to ask US and European regulators within a few weeks to approve a booster dose of their evidence-based COVID-19 vaccine for greater risk of infection six months after inoculation and spread of the highly contagious Delta variant.

However, the US Food and Drug Administration (FDA) and the Centers for Disease Control and Prevention (CDC) said in a joint statement that Americans who have been fully vaccinated do not need a booster COVID-19 shot at this time. .

Some researchers have also questioned the need for booster shots. The European Medicines Agency did not immediately respond to a request for comment.

Pfizer’s chief scientific officer, Mikael Dolsten, said the recently reported decline in vaccine efficacy in Israel was mainly due to infections in people who had been vaccinated in January or February. The country’s health ministry said vaccine effectiveness in preventing both infection and symptomatic disease fell to 64% in June. Read more

“The Pfizer vaccine is very active against the Delta variant,” Dolsten said in an interview. But after six months, he said, “there is likely to be a risk of reinfection as antibodies, as predicted, decline.” Data would be sent to the FDA within the next month, he added.

Pfizer did not release the full set of Israeli data on Thursday, but said it would be released soon.

“It’s a small dataset, but I think the trend is accurate: Six months out, given that Delta is the most contagious variant we’ve seen, it can cause infections and mild illness,” Dolsten said.

The FDA and CDC said in their joint statement: “We are prepared for booster doses if and when science shows they are necessary.”

Pfizer’s own data from the United States showed an erosion of the vaccine’s effectiveness by the mid-80s after six months, Dolsten said of the variants circulating there in the spring.

He stressed that data from Israel and the UK suggest that the vaccine remains effective around severe disease with declining antibody levels.

The vaccine, originally conceived by Germany’s BioNTech, showed 95% efficacy in the prevention of symptomatic COVID-19 in a clinical trial conducted by the companies last year.

Dolsten said early data from the company’s own studies show that a third booster dose generates antibody levels five to ten times higher than after the second dose, suggesting that a third dose will offer promising protection.

He said several countries in Europe and elsewhere have already approached Pfizer to discuss booster doses, and some may begin administering them before a possible U.S. permit.

Dr. Eric Topol, professor of molecular medicine and director of the Scripps Research Translational Institute in La Jolla, California, said basing the decision on declining antibody protection ignores the role of important other parts of the immune response, including memory B cells, which can produce antibodies as needed. they are challenged by the virus.

“You need better studies to be able to claim that. It’s not just neutralizing antibodies,” Topol said.

Pfizer has previously said that people are likely to need a booster dose, although some researchers have asked when or whether boosters are needed. Read more

BioNTech has previously claimed that while antibodies are the body’s main weapon against an initial infection, the cellular immune response mainly protects against disease outbreaks and exacerbations.

Pfizer plans to launch a placebo-controlled power trial with the 10,000-participant booster soon. The investigation will run during the fall, Dolsten said, meaning it will not be completed before the company submits it to the FDA.

Dr. William Schaffner, a vaccine expert at Vanderbilt University Medical Center, said even if Pfizer succeeds in getting its booster approved by the FDA, it would only be the first step. The booster still needs to be reviewed and recommended by CDC advisors.

“It’s by no means automatic,” he said. Schaffner said realistically that most of the public health bandwidth in the United States is still focused on encouraging Americans to get their first and second doses of the vaccine.

Because boosters would drive increased demand for vaccines while much of the world is still unvaccinated, Dolsten said Pfizer is looking at ways to increase production.

It is already targeting the production of 3 billion doses this year and 4 billion shots next year. Dolsten declined to give a forecast for exactly how many more doses the company could add.

Pfizer and BioNTech said they had designed a new version of the vaccine against the Delta variant with a clinical trial likely to begin in August, but added that the current vaccine version had the “potential” to protect against the variant.

Pfizer expects the COVID-19 vaccine to be a major contributor for years and has expected sales of $ 26 billion from the shot in 2021. BioNTech said in May that vaccine supply agreements for this year are worth € 12.4 billion so far in income accruing to it with multiple contracts on the cards.

Global spending on COVID-19 vaccines and booster shots could total $ 157 billion by 2025, according to U.S. health data firm IQVIA Holdings.