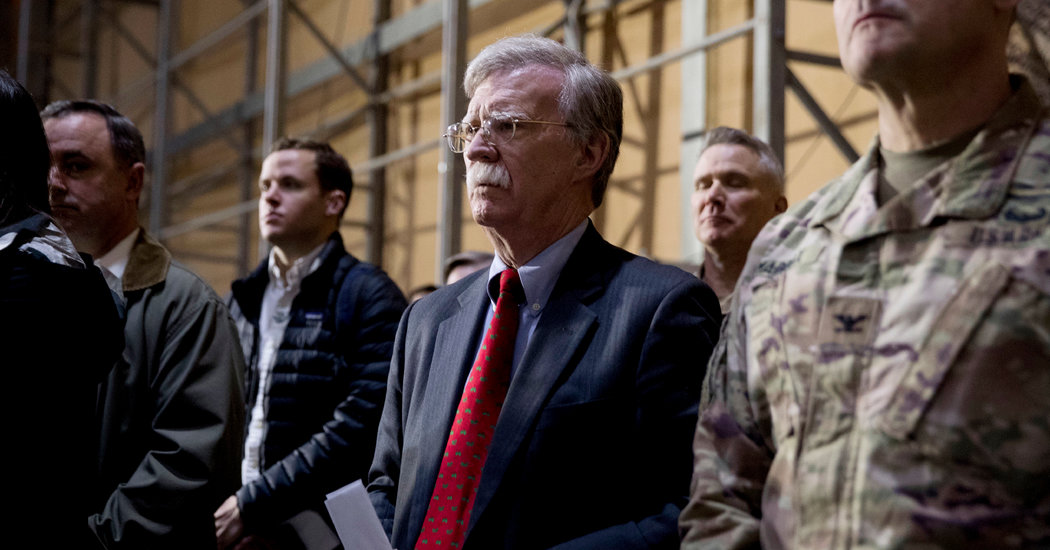 Mr. Bolton, 70, is not the only Iranian hawk in Mr. Trump's circle of top advisers. Secretary of State Mike Pompeo declared in a speech at the American University in Cairo last week that "countries increasingly understand that we must confront the ayatollahs, not coddle them." [EarlierthismonthhewarnedIranagainstlaunchingthreespacecraftdescribingthemasapretextfortestingmissiletechnologythatisnecessarytocarryawarheadtotheUnitedStatesandothernationsHisstatementappearedatbuildingalegalcasefordiplomaticmilitaryorcovertactionagainsttheIranianmissileprogram

It was surprising because Iran has used these modest space missions, mostly to deploy satellites, since 2005. The senior American official said that the Pentagon and the intelligence agencies disagreed with Mr. Pompeo's interpretation of the threat posed by the satellite launches

Speaking on Sunday on CBS's "Face the Nation" during a visit to Abu Dhabi, in the United Arab Emirates, Mr. Pompeo discounted the argument that Mr. Trump's decision to withdraw 2,000 American troops from Syria in the coming months undercuts Washington's ability to achieve its other goals in the region.

But Mr. Pompeo also opposed the idea of ​​an airstrike on Iran after its attack on the embassy, ​​according to a senior senior administration official. On Sunday, he declined to comment on The Journal's report. On each stop of his Middle East trip, Mr. Pompeo, a former Army officer, has spoken of the need to counter Iran, but has not talked about military action.

When Mr. McMaster, then a three-star Army general, took over as national security adviser in early 2017, he ordered a new overall war plan for Iran. Mr. Mattis, who is himself an Iran hawk from his days as a Marine Corps commander in the region, delivered options. But those plans were not for the child of pinpoint strikes that Mr. Bolton envisioned the attack on the American Embassy on Sept. 6.