Over 50,000 march in Belarus against authoritarian leader 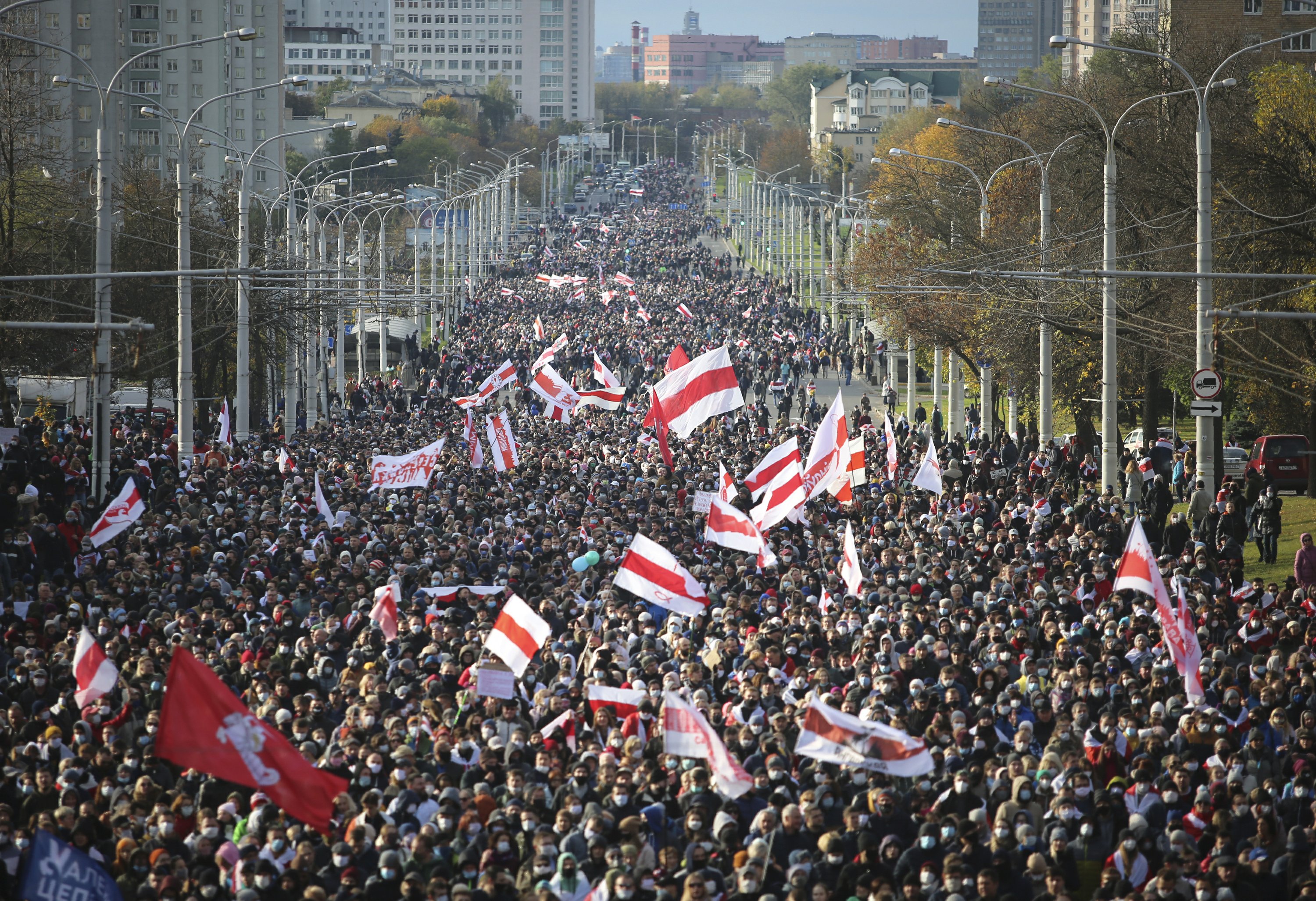 KYIV, Ukraine (AP) – Tens of thousands of people marched through the streets of Belarus’s capital on Sunday demanding the dismissal of the country’s authoritarian leader, who won his sixth term in an election deemed rigged.

According to the Viasna Human Rights Center, more than 50,000 people took part in the demonstration in Minsk. Protesters carried banners mocking President Alexander Lukashenko, who has ruled the country for 26 years, shouting “Go away!”

Mass protests have rocked Belarus since the August 9 presidential election, which gave Lukashenko a 80% victory in the vote. His main challenger, Sviatlana Tsikhanouskaya, got 1

0%. She and her supporters refused to acknowledge the results, saying the result of the vote was manipulated.

Authorities tried to quell the riots with mass prisons and police dispersed the crowds with truncheons, stun grenades and water cannons. On Monday, the country’s Interior Ministry threatened to use firearms against the protesters “if necessary” and said the demonstrations “have become organized and extremely radical.” However, the protests continue despite the crash.

“This is the first march since the authorities threatened to use firearms. But even that did not stop the protest, which is transformed into various forms but does not die down, “said Viasna leader Ales Bialiatski.

Tsikhanouskaya, who is currently in exile in Lithuania after leaving the country for fear of her safety, threatened on Tuesday to call for a nationwide strike unless Lukashenko announces his resignation, releases political prisoners and stops attacks on protesters.

“If our demands are not met on October 25, the whole country will take to the streets peacefully,” Tsikhanouskaya said in a statement. “On October 26, a national strike for all businesses will begin, all roads will be blocked, sales in state-owned stores will collapse.”

Protesters on Sunday marched down one of Minsk’s main roads, where plants and factories are located, shouting “Strike!” and “The workers are with the people.”

The city center was blocked by water cannons and armored vehicles, and dozens of military vehicles were seen driving around the streets. Several subway stations were closed and mobile internet did not work in the march area.

“Lukashenko understands that if there had not been all these artificial obstacles, the whole of Minsk would have come out (to rally),” said Valery Karbalevich, an independent political analyst in Minsk.

“Despite the threats to use firearms and intimidation from the KGB (Belarus State Security Committee), people are taking to the streets – the protests are not taking place and it shows that the political crisis in Belarus is in full swing,” Karbalevich said.

In a statement on Sunday, Tsikhanouskaya called on Belarusians to continue peaceful protests.

“Let us continue to express our demands peacefully and persistently – it is yielding results,” she said, adding that authorities have released Ilya Salei, the lawyer for Tsikhanouskaja’s top employee, Maria Kolesnikova, from detention.

Kolesnikova was jailed last month on charges of undermining state security that could result in a five-year jail term if convicted. Salei was also detained in September in connection with the same charge.

Apart from Minsk, the protests took place on Sunday in several major cities, including Brest, Grodno, Gomel and Vitebsk. Many protesters have been detained across the country: the list of detained protesters released by the Viasna center on Sunday night had over 150 names on it.