Out of bounds: Why basketball players believe they are last to touch ball 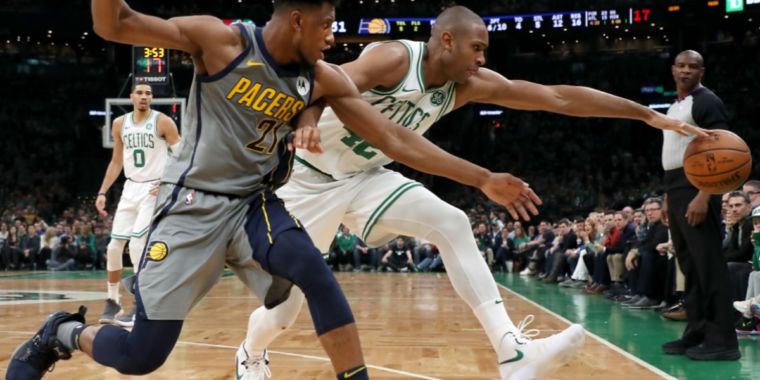 With the full swing NBA play emotions, emotions are running high among super-fans, inevitably leading to lots of heated arguments about bad referee calls and disputed plays. For instance, when a ball goes out of bounds, it can sometimes be challenging to determine which player touched the load. Both players will undoubtedly argue their opponent touching it last, trying to give possession of the ball to their own team. The other player will just as forcefully argue the opposite.

Who is right? According to a new paper in Science Advances both players are subject to a child of temporal bias whereby they will pass themselves on touching the ball first. "Our brains tell us that actions generated by ourselves come before simultaneous external events," the authors write. "Briefly, we have identified what may be a principal cause of arguments in ball games, and it's about time." According to co-author Ty Tang, a graduate student in psychology at Arizona State University, the idea for the study emerged from conversations with his advisor, Michael McBeath, about subjective perception, particularly of time. This naturally evolved into how this subjective perception plays out in sports, specifically arguments about who touched the ball before going out of bounds in basketball. Tang proposed a series of three experiments to determine if the players could genuinely experience the ball before their opponents in such scenarios. It was not the chaotic environment of a live basketball game, but it could control the variables to produce a robust study.

"With this clever study, Tang and McBeath zoom in on those moments of millions of sports fans look at every day, "said neuroscientist and bestselling author David Eagleman. "What should have been up to date or misjudgment has now been brought into the realm of basic neuroscience." Eagleman has considerable expertise in time perception. Back in 2007, he decided to test the subjectivity or "brain time": why time seems to be slower when you are terrified, for example.

Initially, Eagleman tried to test the idea on the roller coasters at Six Flags Astroworld theme park, but the coasters just weren't scary enough. He then discovered SCAD diving (Suspended Catch Air Device). Think bungee jumping without the bungee cord – you just jump off a 50-foot platform and freefall into a not below. Eagleman recruited volunteers and strapped LED perceptual chronometers onto their wrists, then compared to how much time had actually passed versus how much time the participants had perceived. All the participants consistently over-estimated the time it took to fall. The results, published in PLOS On e, indicated that our sense of time slowing down in emotionally heightened moments has to do with how memory works.

For their first experiment, Tang and McBeath paired up the volunteers and had them sit across from each other at a table with a barrier between them so one could not see the other. Every time a light flashed at random intervals, the subjects would touch a sensor on the back of the other person's left hand as quickly as they could. Then each one would push a button indicating if they thought they had touched the other person's hand first. None of the subjects received any feedback on whether they were correct in their assessment. Tang and McBeath found that in the percentages of the cases, both subjects had been the first to touch the other person's hand – even if the other subject had done so 50 milliseconds earlier. human element, replacing one subject with a mechanical device to the remaining subject's hand. A third iteration showed the subjects whether they touched first or a beep sounded first. The results were the same: even when there was a 50-millisecond delay between the touch or beep and when the subjects sensed it, the participants still insisted they had touched first.

According to McBeath, this so-called "egocentric temporal order bias "makes perfect sense. "People are generally accurate in the real-time perception of their own actions, like hitting and catching a baseball, but we need a little extra time to process something unplanned, like an unexpected tap on the shoulder," he said. "When something is unexpected, there is a slight perceptual delay while the brain figures it out."

Granted, this was a small, highly selective sample size: sixteen undergraduate students (11 females and five males), asked to repeat the task 50 times. According to Tang, they kept the sample size small because the initial pilot study produced a very strong effect size. "We didn't want to over-sample, because then it would over-inflate our power for the study," he explained. "Even with our relatively small sample size, we find this very high effect size. There is a very low probability that this would happen by chance."

Their findings could help improve the design of computerized devices using for determining the timing of disputed plays at sporting events. The findings could also lead to secure automated assistive systems, such as the automatic braking systems found in some new cars that are capable of detecting and reacting to threats faster than human beings. Mostly, however, the results shed more light on the many perceptual biases we experience on a daily basis.

"I hope that we find more evidence and reasons why we experience things differently, people will become more understanding that other people really do have a different experience of the world and how to happen, "said Tang.