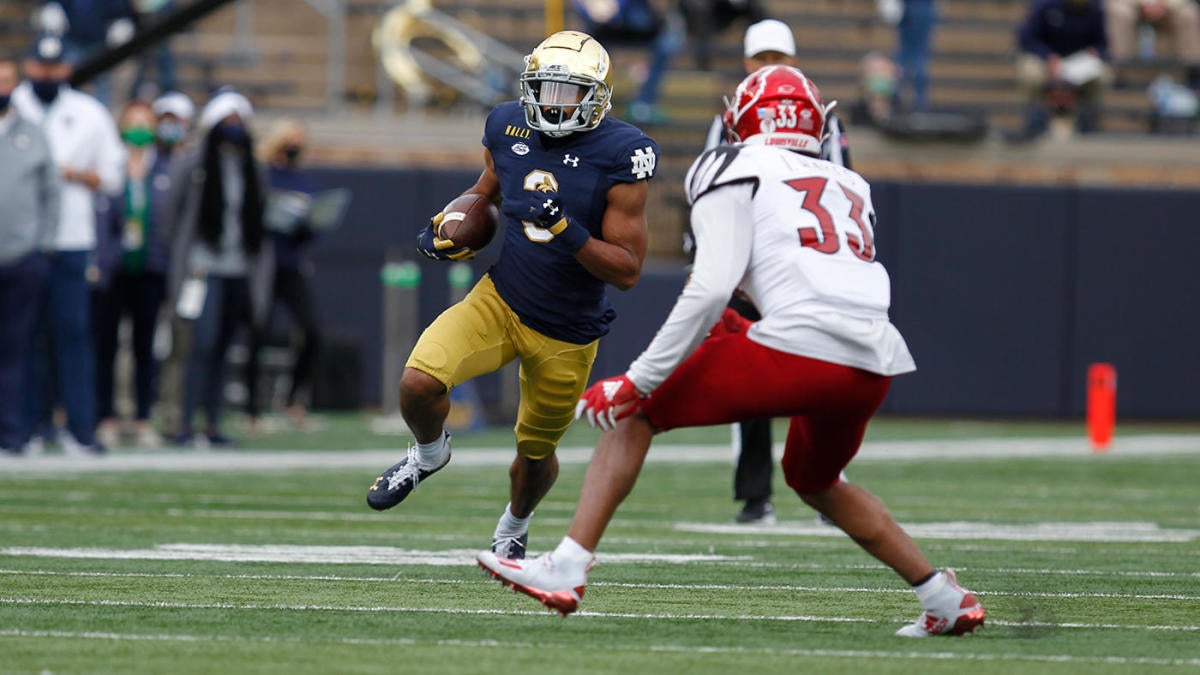 Nr. 4 Notre Dame defeated Louisville 12-7 on Saturday, extending its home win to 22 games and its current victory to one of the nation’s 10 best straight. While it’s all good for Notre Dame, it’s hard to imagine anyone feeling good about the show in general – or at least you would think so. But Notre Dame coach Brian Kelly felt different when he was interviewed on the pitch immediately after the victory.

“I know it’s 12-7 and it’s not going to go down like an instant classic, but boy, did we do a lot of really good things today,” Kelly said. “We scored goals instead of touchdowns. It̵

7;s probably the pickup here – that we got better in the red zone.”

The Irish offense cleared just 338 yards the day quarterback Ian Book was off-and-on. While Book scored a spectacular touchdown in the third quarter that gave the Irish the 12-7 lead that proved to be the difference, he completed just 11 of his 19 passes on 106 yards. Running back Kyren Williams was the star of the Irish offense today, rushing 127 yards on 25 carries.

The Irish are now 4-0 on the season and 3-0 in the ACC, leaving them tied on top of the ACC ranking. The loss lowers Louisville to 1-4 on the season and 0-4 in ACC play, effectively eliminating the Cardinals from any slight glimmer of hope they had of competing for a conference title this season.

Here are the three biggest takeaways from the Notre Dame victory in South Bend on Saturday.

Notre Dame is not among the top four teams

I have now seen each of the four matches that the Irish have played this season and while they are ranked No. 4 in the country and are likely to be among the top four again next week, there are only two reasons why it is the case. One is that the Irish started the year at No. 10 and three of the teams ahead of them lost at least once. The second reason is that three more teams that were in front of them have not started playing yet.

I’m not saying the Irish are bad. They are a top-10 team and will be in the top 10 in any normal season after this start. But if this is really one of the top four teams in the country, then we have a lot of problems. Notre Dame’s four wins have now come against teams that together are 4-15 on the season as I write this. Only one of those victories, a 52-0 effort by South Florida, has seen a dominant effort from the Irish. Sure, they were never in serious trouble last week against Florida State, but the Seminoles looked better against Notre Dame than they did in losses to Georgia Tech and Miami.

Right now, this is a team that plays well enough to reach the ACC Championship game, but it’s not close to the level it should be if it wants a realistic chance of beating Clemson.

2. The Irish need to resolve their red zone

Brian Kelly picked up the team’s problems in the red zone against Louisville, and he’s right – that’s a problem. A problem that was not limited to today’s action. The Irish came into Saturday’s match after scoring just a touchdown 68.8% of their red zone possessions. It ranked 33rd nationally and this rate has dropped to 60% after the Irish only had a touchdown on four red zones today.

You can get away with having to settle for a field goal several times in the red zone against teams like Louisville, but it will not fly against good teams. What the problem is, I’m not sure it can only be identified for one thing. Today, it looked like the Irish were just getting a little pass-happy inside the 20th. Louisville was content to drop eight guys in coverage on those pieces and force Book to find an open goal. Book then held on to the ball for too long before it was either fired or just lacked a touchdown chance in the back corner of the end zone. Finally in the fourth possession, Book took advantage of the fact that Louisville lost so many defenders and started alone for a touchdown.

In the future, if I’m Irish, I might consider running the ball a little more often inside the 20s.

There is no bouncing back from this point. This is a Louisville team that went 2-10 in 2018 and fired Bobby Petrino. Then, in Scott Satterfield’s first season in charge, the turnaround was immediate. The Cardinals were a fun, exciting team that finished 8-5 and came into 2020 as a team that some thought could make some noise in the ACC. The only noise they have made is a shock as they are now 0-4 in the conference after losses to Miami, Pitt, Georgia Tech and now Notre Dame.

Ironically, on Saturday, it was the offense that was the problem after the defense had been in a sore spot all season. The defense did a fantastic job, but the offense could not string enough good games together outside of its first drive in the third quarter. The good news for the Cardinals is that there are a few winable games left on the schedule, but I’m not sure how winable they are considering how bad this team has looked. This could be a team that finds itself 2-8 or 3-7 in the ACC this year.