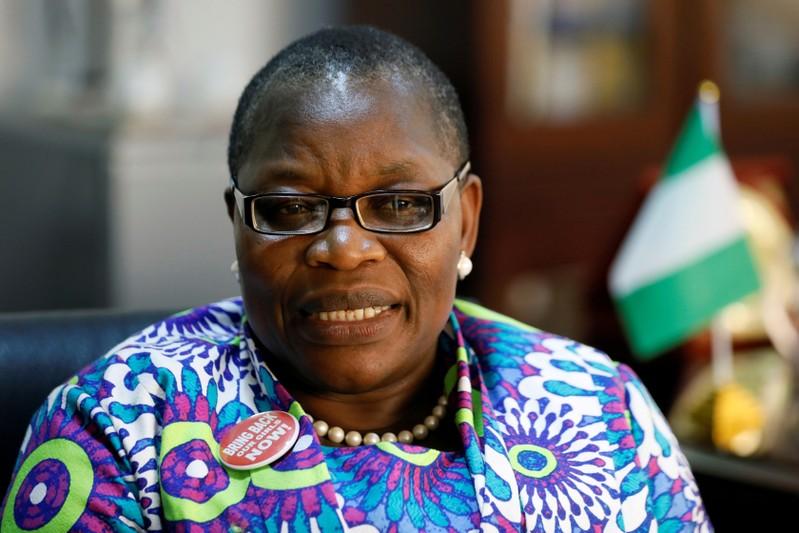 Former Nigerian minister and Chibok girl activist Obiageli Ezekwesili speaks during an interview with Reuters in Abuja, Nigeria on October 8, 201

LAGOS (Reuters) – The leading female candidate in Nigeria's presidential election said Thursday, she had withdrawn from the race weeks before the vote to help build a coalition to provide a viable alternative to the country's two main parties.

Former Prime Minister Obiageli Ezekwesili, co-founder of a group to raise awareness of more than 200 girls kidnapped by the militant Islamist group Boko Haram in 2014, said on Twitter that she had been in negotiations for three months with other candidates for a coalition.

Nigeria's presidential election is scheduled to take place on February 16. The main candidates in the race to lead Africa's top oil producing country are the incumbent, Muhammadu Buhari and Atiku Abubakar, a former Vice President representing the main object of the People's Democratic Party (PDP).

"I have decided to step down from the presidential election and focus on helping build a coalition for a viable alternative to #APCPDP in the 2019 General," Ezekwesili said in a tweet.

Ezekwesili was not considered to be among the front runners. Analysts see President Buhari and Abubakar as the only real challengers because of the financial power and patronage networks provided by their parties.

PDP ruled from 1999 when civilian rule began until Buhari's election meeting in 2015 with its All Progressives Congress (APC) party. The main contenders ahead of February's poll have been in the public eye for decades – Buhari was a military ruler in the 1980s and Abubakar was vice president from 1999-2007.

Former Prime Minister Ezekwesili is the founder of the Transparency International civil society organization. She was considered the 2018 Nobel Peace Prize for the recognition of her anti-corruption work.

She is recently known for her work as co-founder of "Bring Back Our Girls", a campaign seeking to raise awareness of about 270 girls kidnapped from their school in the Northeast Nigerian city. Chibok in April 2014 by Boko Haram.

Many of the girls managed to escape during the hours after their abduction or have been released in the last few years, but about 100 are still missing and their condition is unknown.

Reporting by Alexis Akwagyiram; Further reporting by Percy Dabang in Yola and Abraham Achirga in Abuja; Editing by Gareth Jones