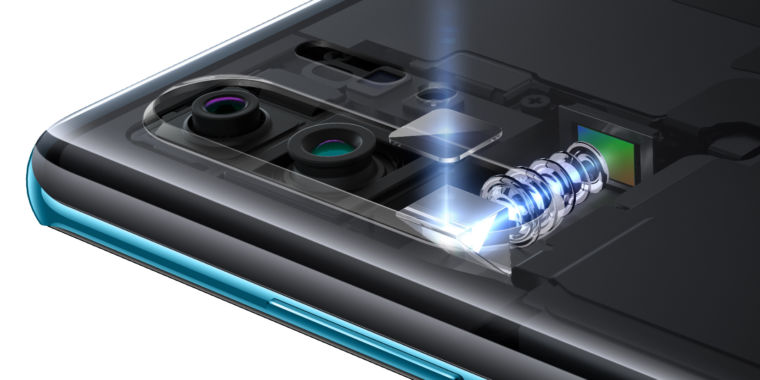 Huawei officially announced the Huawei P30 Pro smartphone today. While featuring a new Huawei-made SoC, an on-screen optical fingerprint reader and many other advanced features, the highlight is definitely the camera's optical zoom, which is up to a giant 5x. No digital zoom. Real optical zoom.

On most advanced smartphones today, such as. The iPhone XS and Galaxy S10, you get only a 2X optical zoom. Usually, these are found in a completely different sensor and lenses on the back of the phone, allowing you to choose between standard 1x lens or extra 2x lens. The reason why you don't usually get big zoom multipliers in smartphones is because the zoom lenses take place. Inside a zoom lens is a series of smaller lenses, some of which move into the lens body to change the focal length. A greater distance between the lenses gives you a higher zoom multiplier, and on real cameras this can reach several meters long.

Of course, the room is characterized by smartphones. Imagine a face-down smartphone and you'll need to fit a vertical stack on the display, the CMOS sensor, and the lens at an 8mm height. There is just not much room.

But what if we have to stack all components vertically? The trick to Huawei's 5x optical zoom is that it uses a periscope design. From the outside it looks like a normal camera setup, albeit with a funky square camera opening. However, internally, the components make a 90-degree right turn after the lens cover, and the zoom lens components and CMOS sensor are arranged horizontally. Now instead of getting a lot of lenses and CMOS chip in 8 mm vertical telephone room, we have acres of horizontal phone space to play with. We have seen prototypes of periscopic cameras from Oppo, but as far as commercial units go, the Huawei P30 Pro is the first.

While the optical zoom is the big new camera feature, there are four total cameras on the back of the P30 Pro. A 40MP main camera, a 20MP wide angle, 8MP 5X tele and a Time of Flight depth sensor camera. The main 40MP camera uses a 1 / 1.7-inch-type sensor that, measured diagonally, would make it 32 percent larger than 1 / 2.55 inch sensors in the Galaxy S10 or iPhone XS. I think the biggest ever sensor in a smartphone is still the Nokia 808 Pureview, which had a 1/2 inch type.

Huawei also made a large part of the new "RYYB" pixel layout in its camera sensor. Normally, CMOS sensors are "RGGB", a red pixel, two green and a blue. By changing the green pixels to yellow, Huawei claims that it can capture 40 percent more light as the yellow filter catches green and red light. Of course, this will make the color wonky, but Huawei claims it can correct for it in software.

The front page uses a beautiful standard notch design with a single 32MP camera in the middle of the screen. The screen is a 6.47 inch OLED with curved sides and a 2340 × 1080 resolution. An optical fingerprint reader is embedded in the display and you will not find an earpiece anywhere as it is also embedded in the display. Huawei doesn't explain the feature much more than calling it "Huawei Acoustic Display Technology", but judging by the video that the company has posted, it looks like an electromagnet vibrates the screen to produce sound.